Home Sea Naval mine ‘explodes’ in the Firth of Clyde 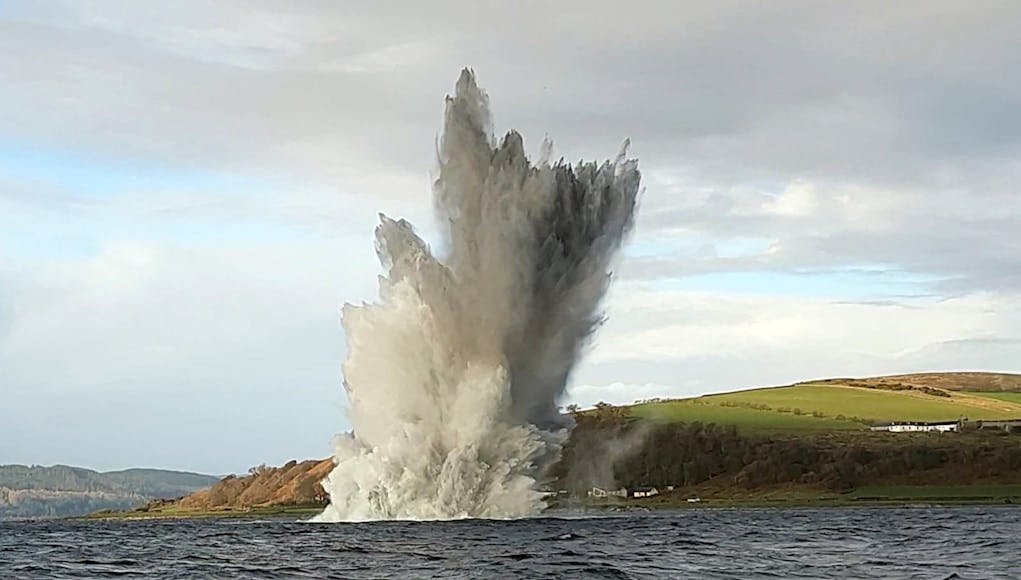 Royal Navy bomb disposal experts have detonated a wartime mine trawled up by fishermen in the Firth of Clyde.

The Royal Navy say that the team from Northern Diving Group, based at Faslane, sprang into action after the wartime device – laid by a German submarine off the island of Ailsa Craig – was recovered.

“The trawler’s seven crew were evacuated by Troon Lifeboat and Rothesay Coastguard Rescue Team while the vessel was sailed to Ettrick Bay on the Isle of Bute to meet with divers. They declared the mine, which still contained around 350kg of explosives, to be in pristine condition and decided a controlled detonation at sea was the best solution.”

They coordinated the lowering of the ordnance to the seabed off Ettrick Beach, before a controlled explosion sent it – and mud and water – high in the air. “Considering it had been in the water for around 80 years, the mine’s condition was remarkable. From the initial pictures we were able to easily identify the mine type and, importantly, determine that the explosive fill was intact and therefore presented a significant hazard. The vessel was diverted to Ettrick Bay and met by my team, led by Petty Officer (Diver) Robert McCann who safely dealt with the situation.

Items of this size are relatively uncommon, however, the group are approaching 100 call-outs this year supporting civil authorities with all types of Explosive Ordnance Disposal, ranging from mines and torpedoes to hand grenades and improvised devices. On average, across the UK, Royal Navy Clearance Divers are tasked once a day for EOD assistance. This highlights the remaining presence of historic ordnance. Even small items can be unstable and present an explosive hazard; carrying-out a controlled explosion is the only safe way of dealing with them and neutralising the hazard.”

Amazing that they are still live after so many years-tribute to German engineering among other things. I am fascinated by the process involved in the detonation. Would the mine have been trawled up from the seabed or floating just below the surface? How is it handled off the trawler prior to detonation-it must be a delicate operation especially in heavy seas! One would assume that the original detonating device had perished and the RN bods would have to affix a new detonator. That would I presume be set off by an electronic signal of sorts or would it require an… Read more »

Oops-more likely to be one of ours(?) in which case it would be a tribute to British Engineering!

To get rid of these things you attach a slap of PE4 and remote it. You can do it by a timed fuze to det cord to the slab , by wire down to the det in the slab or using a sonar coded pulse to a receiver attached to the slab. And yes I remember senior service and Pussers Blue liners which you got fag stamps for every month whether you smoked or not ( Duty free fag stamps had value from us non-smokers to the dirty stinking tabbers!) All have now gone as will smoking and ciggies in… Read more »

Thanks for that Gunbuster! I too am a long ago reformed smoker. I was brought up in Rhodesia when cigarettes were a shilling for 20 so smoked but saw the light later. Also remember Players Navy Cut and of course Woodbines and Weights(When England Invaded Germany Hitler’s Troops Surrendered) 🙂 Cheers