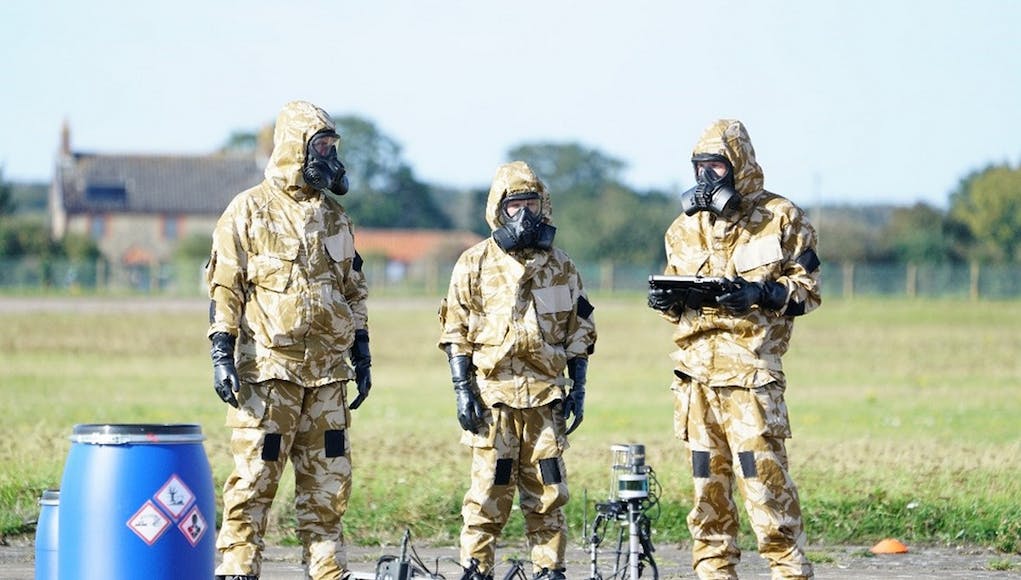 Dstl scientists have successfully trialled a fully autonomous robot that will help defence and security personnel dealing with hazardous scenes, say the Ministry of Defence.

The Merlin Robot, developed by industry partner HORIBA-MIRA with funding from the MoD and the Home Office, autonomously carried out simulated chemical reconnaissance tasks over test areas covering up to 10,000 square metres.

Currently a single prototype, the Merlin robot operated continuously on tasks for several hours with ease, allowing personnel to monitor and manage the test incident scene from a safe distance, away from potential harm.

Watch the Merlin robot in action

“Chemical reconnaissance (recce) on foot and in specially modified vehicles is currently carried out by specialist personnel in the event of suspected or confirmed use of chemical agents, both in military battlefield and homeland security scenarios. It is a dangerous and laborious task requiring high levels of specialist training. In the future, however, autonomous systems could enable the task with significantly less burden on personnel and at lower risk to the deployed teams. The trial, run under Dstl’s Project Servitus, was a follow-on to successful previous work conducted under Project Minerva, which investigated the use of ground-based and airborne autonomous systems to tackle hazardous scene assessment in areas contaminated with chemical agents, on behalf of the MOD and the Home Office.

Initially developed as part of Project Minerva, under Servitus the Merlin robot had an off-the-shelf chemical vapour sensor mounted so that it can be accurately positioned close to the ground. The robot’s AI-based object recognition and search and detection techniques were also further developed, including drawing on other Dstl-funded work on MIRA’s Viking re-supply and recce unmanned ground vehicle (UGV), enhancing the system’s autonomous behaviours and capability. The Servitus trial tested different autonomous behaviours for search and mapping operations in exploring an area, obstacle avoidance and chemical mapping. The operationally realistic trial was undertaken with support from specialist C-CBRN operators from 27 Squadron RAF Regiment RAF Honington. Non-toxic chemical simulants were sprayed onto the ground within a simulated operational activity, and both the military recce teams and the robot undertook the task of searching the areas to find and map the chemicals and plot clean routes.”

A spokesperson from 27 Squadron RAF Regiment was quoted as saying:

“It was a hugely interesting project to be part of within the early development stages, and it was a pleasure to work alongside the MIRA and Dstl personnel who were very engaged, approachable and keen to listen to our observations and experience. The system has a lot of potential and testing our personnel against the AI of the robot was a good benchmark.”

By the end of the trial, Merlin had successfully demonstrated autonomous operation in area recce tasks that were both clean and contaminated, and had performed tasks to find clean routes through contaminated areas. You can read more here.

As an ex CBRN instructor any asset to help out on this often neglected skill is welcome.

The British Army has had them for years, in this case the youngest, newest or most disliked person on a section, who was told told to go well yonder and carry out the sniff test

I was about to say – they used to be called private or lance.