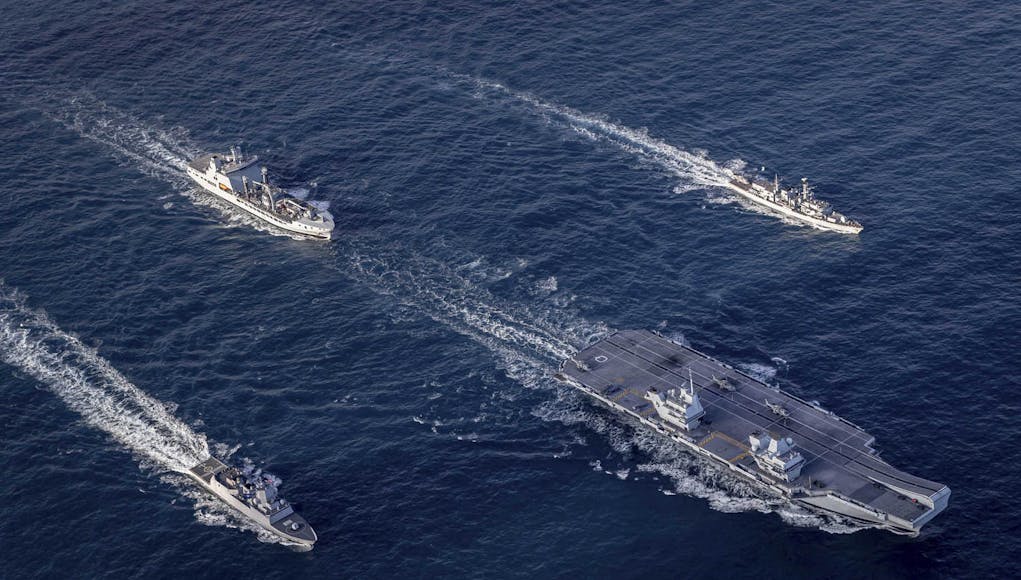 The Queen Elizabeth Carrier Battle Group formed up with a new addition just days from home.

According to the Royal Navy, the Norwegian Navy’s newest frigate HNoMS Thor Heyerdahl.

“Slipping into the battle group for the second time alongside HMS Northumberland and tanker RFA Tideforce is the Norwegian Navy’s newest frigate HNoMS Thor Heyerdahl as the Westlant 19 deployment ends as it began: a spot of NATO action. The curtain raised on the deployment in September with a NATO anti-submarine exercise, Cutlass Fury, hosted by the Canadians and it ends with yet more combined NATO/anti-submarine warfare training in the Western Atlantic. It’s the last act of a busy three months away for the Portsmouth-based carrier which hosted British F-35 Lightning jets for the first time at sea – followed by US Marine Corps doing the very same. The future flagship embarked three UK jets from 17 Test and Evaluation Squadron (TES) based at Edwards Air Force Base in California, as well as three which crossed the Atlantic from RAF Marham. The 5 week operational test phase, headed up by the Air Warfare Centre, was designed to provide ‘end-to-end’ testing of the jets and the combined Royal Navy and Royal Air Force personnel who operate and support the squadrons.

The tests included: mission briefs; preparation of the jets – including arming them using the ship’s unique automated weapon handling system; launching; fighting the mission (including weapons drops) and returning to Queen Elizabeth.” “This has been an extremely successful deployment for HMS Queen Elizabeth. It’s all been about increasing the complexity and tempo of our activity, building the capability of the strike group and testing ourselves in a demanding training environment with our close partners from the US Navy and Marine Corps. Embarking UK F-35B Lightning for the first time and integrating them within the carrier strike group is a significant milestone and we are well set for an equally demanding 2020 and our first operational deployment in 2021.” “The five-week period of operational tests with UK F-35s was significant and historic. As the last pilot to fly Harrier from the deck of HMS Ark Royal in 2010, it filled me with tremendous pride to see UK fixed wing aircraft operate once more from a British carrier.”

On a more serious note, have they abandoned the practice of the rolling landing?

I suppose they would only use a rolling landing when returning with heavy weapons…or practicing. I doubt they would use it as standard landing practice!

Not at all. I believe the optical landing system has not been installed on the QE yet so its quite a challenge and the SRVL in Oct was done as a proof of concept with more thorough testing to be undertaken next year to establish operating parameters.

Absolutely right the system has been fitted to PoW and is to be retrofitted to QE one presumes before she does any more serious testing, though not sure when. Meanwhile proof of concept was indeed carried out as we saw on the TV series recently.

What is the advantage to a rolling landing if the weight of the aircraft is not a consideration?

I believe it would be mostly for currency if weight is not a concern.

Glass Half Full
Reply to  Herodotus

In addition to the economics of not having to potentially dump weapons and/or fuel before a vertical landing, SRVL may also enable more rapid aircraft recovery.

It saves the deck coating as the hot exhaust gas is not focused in one spot and as the wings supply lift the lift fan is under less stress so extends the life. Its early days but it could become the norm.

Thanks Andy….but I thought you only got BAE rash around the Nuts 🙂

that’s on the sorry i meant glue

The finest medium carrier ever made. 🙂

Sigh… please ignore. This issue has already been dealt with. They are not medium carriers and I apologise for my comment.

Will the British F35s sail home with her?

If they did they should depart before she gets into Pompey.

They left a while ago.

I’ve only just realized that this is basically a Type 31 escorting the QE! Although one suspects with an increase to 2 x 8 cell Mk41 VLS, 8 x NSM Canisters, 4 x torpedo launchers and the 76mm Otto – it is slightly more well armed than its RN cousin will be…

The Norwegian frigate is not equivalent to a Type 31. It is a full fat ASW frigate with rafted machinery and reduced acoustic signature. The fact that it “only” has a small VLS is not relevent. It is nit an area defence asset. The VLS is primarily for self defence and limited local area defence. It has a very capable CMS and sensor suite.

I was coming from an aesthetics point of view, with both being based on the Arrowhead design. You seem to have worked yourself up a little there old bean in thinking I am suggesting the Type 31 is the better vessel. Read the post again, carefully, and you’ll see I was actually stating the opposite. Why you’re banging on about ‘only’ having a small number of VLS is beyond me, but keep kicking on fella, you’re doing just great.

lets wait and see, at the rate the type 26 and 31 specs are on the back of a fag packet somewhere

I am of course pretty dim, fella, compared to your high intellect but your same condescending implication re. T31s struck me as well as did the responder.

sorry trev do you mean me? or the one above?

Glass Half Full
Reply to  Rfn_Weston

You are confused. They are not both based on Arrowhead (or Iver Huitfeldt which I assume is what your meant?) The Norwegian frigate is based on a Spanish frigate design.

I withdraw my earlier remarks based on the misreading you pointed out. In my defence, I claim a flu induced fog of the mind! Posting crap online is bith the “only” thing I can do right now, and also the last thing I should be doing ?

It would appear we are both mistaken!!

I thought both were based on Arrowhead!

For all of dads and moms that love to stay home to take care of their loved ones, or rest of people on the search for an opportunity to pull in some extra income for their family month after month let me share a remarkable opportunity to explore…Read more here…………www.Fox120.com

come one come all, the more, the merrier integration training may well be needed one day so integrated naval exercises will go a long way towards effectiveness