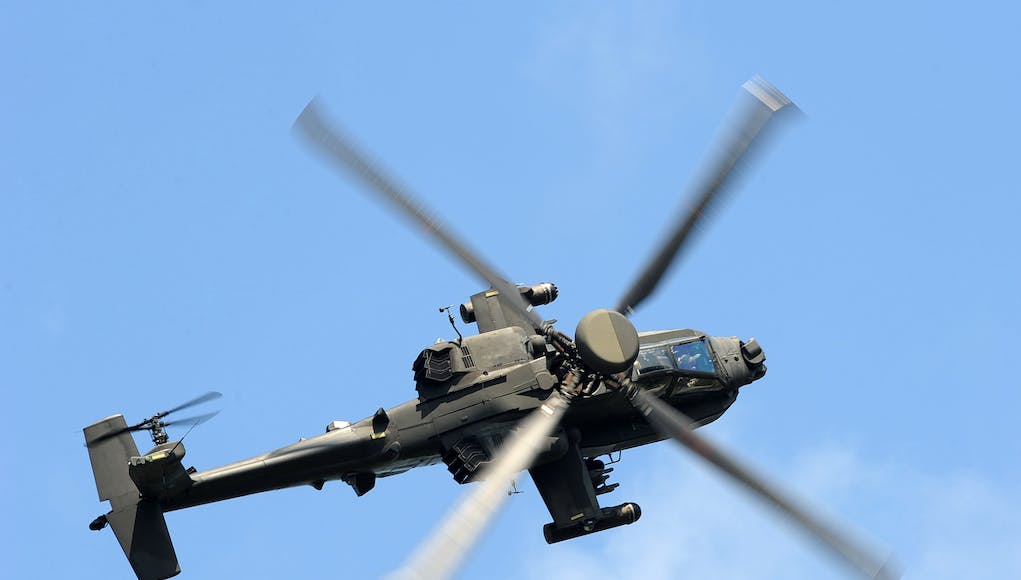 The Government had earlier confirmed that they intended to order the last 12 of 50 AH-64E Apache Guardian helicopters by the end of the year however that did not happen.

The information regarding the original intention to purchase the final 12 of 50 at a later date comes from a question asked in Parliament by Mr Kevan Jones, MP for North Durham:

“To ask the Secretary of State for Defence, when he expects the Department to complete its order for all 50 AH-64E Apache attack helicopters.”

“The Ministry of Defence is buying 50 Apache AH-64E helicopters from the US Government under a Foreign Military Sales arrangement. The US has ordered the first 38 of the helicopters as part of its own larger purchase, under a multi-year contract with Boeing.

This ensures we can take advantage of economies of scale and secure best value for the UK taxpayer, while procuring a vital capability for the UK. We expect the remaining 12 helicopters to be incorporated within the contract by the end of the year.”

This did not happen at the end of the year and has not happened yet. The US Department of Defense have not issued a contract modification notice or even any new information relating to UK Apache procurement.

A spokesman for the MoD insisted that the UK will still order all 50 Apaches, to be delivered by 2025, and splitting the order “will secure the best value for money for the taxpayer as we secure a vital capability for the UK.”

An earlier contract modification detailed by the US Department of Defense in June last year indicated that Boeing had been awarded $411 million for 38 Apache aircraft for the UK. A 9th of June contract notice read:

Well we are not going to see any large equipment orders until the latest Defence Review (horse trading with the Treasury) has been completed.

AH64 is war winning piece of kit, we need in the region of 80 even it means other equipment is sacrificed in order to obtain that number.

I dont see why we just keep some of the westlands apaches as well, moth ball them as depth in numbers, still good kit

They’re knackered through over use – I believe they are at the end of their airframe life, but am willing to be corrected.

that’s a pretty low airframe life, only 20 years. must have been helmand province that killed them

Think it hours flown and they have certainly been busy.

I assume they can be rebuilt but suspect it is just more cost effective to buy new at £10m a piece.

unbelievable value for money – £10m each – we need to have 200 of these, no doubt in my mind. They are the most utilised piece of kit we have had in the last 20 years – we should be buying more not less and at this price it is unbelievable vfm. we really need to find the money to increase this order – I would go as far as to say the strike brigades are useless without a significant force of these backing them up. but a strike brigade with these becomes something to fear… We often see large… Read more »

The reason for 80 AH64E is that this would enable us to equip 3 AAC helicopter attack regiments and a small OCU.

To order 38 would only allow one regiment plus training unit.

I hope the powers that be in the MOD for once forget about inter service rivalry and buying non priority programs and focus on what our troops really need to win battles if the worse comes to the worse.

The AAC already in effect only has 1 Regiment of Apache.

Even though there are on paper 2 Regiments, 3 and 4, they no longer have 3 Squadrons each but just 2 Squadrons each, in effect 4 deployable Squadrons which is a normal sized Regiment structure plus HQ and support elements.

They are being termed “binary regiments” by the army which is another ridiculous effort.

I think this surprises no one. When the order of the 38 was confirmed at an insanely low price, the obvious question was why on earth not order the full 50 or even more. I hope we are wrong but it seems highly likely that the reduction to 38 or less was always planned and the smoke and mirrors promise for the remaining number was only there to distract until the 2015 (now 2016) defence review that will show heavy reductions in capabilities across the board.

I agree with Paceman. At only £10 million each these massively powerful helos represent huge value for money. I would prefer the SACK getting 90 or 100+ of these rather than hundreds of new armoured vehicles which will be attack helicopter fodder.
If the Apache is that cheap I would love to see the commando helicopter force equipped with 18 Apaches to help deliver close air support and deep strike for amphibious operations.
Why are we only getting 50 Apache Es???

Couldn’t agree more Mr Bell We are supposedly moving to strike brigades – and tanks can’t keep up with these 8 wheel MIV’s but apaches can. Additionally we didn’t send any of our challengers to Afghanistan, despite requests for them by commanders in the field, so realistically if we are not using our tanks why have them, when we can have something we really do use. I just can’t get over the price of these – its just incredible – put in context a wildcat is circa £30-40m Surely we can place an order for 200 of these with 20… Read more »

Pacman – I would always be highly sceptical of ‘price’ numbers. we don’t know how accurate they are or what is included. It would help if the UK adopted a standard pricing system similar to that used in other industries of ‘ex works’ (ie as it leaves the factory), ‘operational’ (ie cost per hour or similar) and ‘support package’ (ie lifetime costs of hangars, maintenance, spares etc). If this was adopted for all military purchases observers could engage in factual discussion and the MoD could be held to tighter account. And probably why we will never see such a system.

Understood Chris, but as these numbers are being provided we need to go with what is published. Even at £20m each I think this is a spectacular piece of kit at the price and we really should be buying far more. If we are looking at an expeditionary force to re-in force mainland Europe, which I think should be our role in NATO then I think we can best do that with air assets that can get into Europe in hours not days. My view is we can have a fewer personnel, but those personnel need to be more lethal… Read more »

Would it be better to get more of these and infantry as apposed to, bound to be complex and over budget, Chally 2 upgraded

Agree with everything being said about this aircraft and its capabilities. well proven and a vital asset. Just one thing wrong in my book – We should have ordered them via a licence arrangement with Westlands. Once again the MoD just happily exports good technical jobs to Boeing in the USA. As I recall the Westland built Apaches were somewhat better than the US built versions as they were marine capable and had better radars. That they could work as hard as any is now a proven fact. One day someone will realise too late that all this ‘saving of… Read more »

There’s a great article on the Merlin on one of the other forums and essentially it is a great piece of kit at a world beating price, built in the uk. Again I think we should have a fleet of 200 not the miserly amount we currently have. But I seem to be a minority these days.

Pacman – Well thats two of us in the minority then. I ventured on other Threads here to say we should not be buying our next batch of Chinooks given we have 60 for heavy unit load lifts already but instead buy twice the number proposed for Chinooks but make it Merlins. Given 2 x Merlins can deliver more weight and people than can 1 x Chinook. Plus they would give us more operational and deployment choices

And as you say built in the UK …

I cant remember where the article was sadly, but essentially its thrust is that the Merlin is world beating but sits in a niche of its own making as a medium+ lift helo. I think they are just amazing and think we should really standardise on Chinook, Merlin, Apache and either wildcat or Osprey. Clearly Tilt rotors will take over the market in the next 15 years, but even after this the Merlin is just phenomenal value at circa £20m each Wildcat is great but £40m is too expensive for what it is and the Apache is really just ridiculous… Read more »

One possible issue with more Merlins is the availability of the Lithium-Aluminium alloy used in construction. It’s probably the most costly Aluminium alloy we’re able to produce in this country.

Westland can’t build them anymore. Because they went from partnership to wholly devoured subsidiaries of Leonardo-Finmeccanica. Leonardo has long partnerships with Bell for R&D. Boeing’s biggest competition for gunships in the US is Bell. So they aren’t going to handover their latest Apache to a company that works with their competitors.

The delay in purchasing the final 12 Apaches most likely has to do with the budget fight in the US Congress between the Democrats and Republicans. The UK could only secure this low price for its Apaches because it was part of a larger order by the US Army. The US Government has been operating under a series of short term Continuing Resolutions that kept the Government functioning but did not allow for the US DOD to make long term purchases. It could not legally order any more Apaches. The US Congress and President Trump recently agreed to a two… Read more »

Last year the MOD valued a 50-aircraft purchase at $2.3 billion, and said that systems from its current attack helicopter fleet would be reused in the AH-64E.

The British Army currently has an active fleet of 42 Apaches, with 25 in storage (67 originally purchased).

Boeing has been awarded $488 million “for the remanufacture of 38 AH-64 Apache aircraft” for the UK.

I sense the life time cost is probably allot higher, but irrespective I agree this is one of the most potent assets we have on the battlefield.

Although this article is a bit old now – I think many of its statements still hold true.

It’s not always more expensive to buy British, but we certainly dont do ourselves any favours with our accounting practices.

As being ex Army. I am fully aware of the Apaches capability’s! And they are brilliant growned attack air craft. However.. they are slow compared to a chinook.. and in a combat situation they only have around 15 mins.. before they have to go to ground and re-fuel or re-arm. Where As say a Chally 2 can stay in a position all day. We need atleast 80 of these New upgraded apaches.. to be affective. We need atleast 300 Chally2 which also needs an upgrade! Especially to smooth bore! As hesh is useless against modern day armour. And I’d say… Read more »