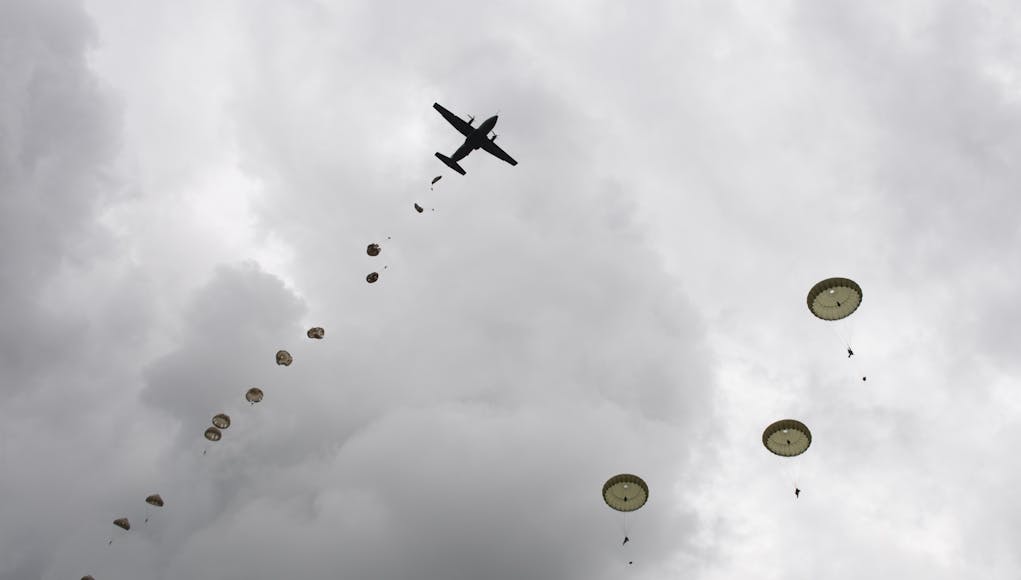 Approximately 280 paratroopers, including 130 UK troops from 16 Air Assault Brigade and 150 from the French Army’s 11e Brigade Parachutiste, carried out a commemorative parachute descent onto fields on the outskirts of Sannerville.

In the early hours of the 6th of June 1944, the same fields served as Drop Zone ‘K’ for the 8th (Midlands) Parachute Battalion, who destroyed bridges to restrict German freedom of manoeuvre.

Their objective was to destroy three German-held bridges to cut off nearby reinforcements from responding to the Allied invasion, then set up a defensive barrier in nearby woods. However, bad visibility and missed drops meant the battalion was scattered across a wide area and faced a perilous trek to the rendezvous point through ground dominated by a German tank division.

They maintained their defensive front for 10 days.

The 6th June 2019 marks the 75th anniversary of the D-Day Landings and the Battle of Normandy.

The British Army, other nations, veterans and civilians will be present across Normandy and many events in Ranville, Sannerville, Caen, on Sword beach and at Pegasus bridge.

Did the Free French drop any paras on D Day? I’m aware of the French Commandos with 1 Cdo bde and some warships.

2RCP dropped into Brittany night of 5/6 June . Corporal Emile Bouetard was the first Frenchman to die during the invasion.

Hi Daniele
Free French paras were dropped at I think 3 locations in Brittany on diversionary ops to distract the Germans from the main event in Normandy.
The main drop was at Morbihan near Vannes ,it was code named Operation Dingson I think.

177 French commandos and 4 sticks of 8 paras were involved in the D Day landings which tells you a lot about how keen they were to be “liberated”.

2 RCP dropped into Brittany night of 5/6 June. Corporal Emile Bouetard was the first French soldier to be killed .

Visited the Airbourne museum and Pegasus Bridge 2 weeks ago. The scale of the operation was awesome ( in it`s true sense ). The museum and the Cafe Gondree are well worth a pilgrimage of rememberance. Very moving.

And we still can’t put more paras in the air than the French!

The saddest thing is that there are more Para’s in Ranville cemetery than we have now.

Lockheed Martin details how F-35B will work with ski-jumps