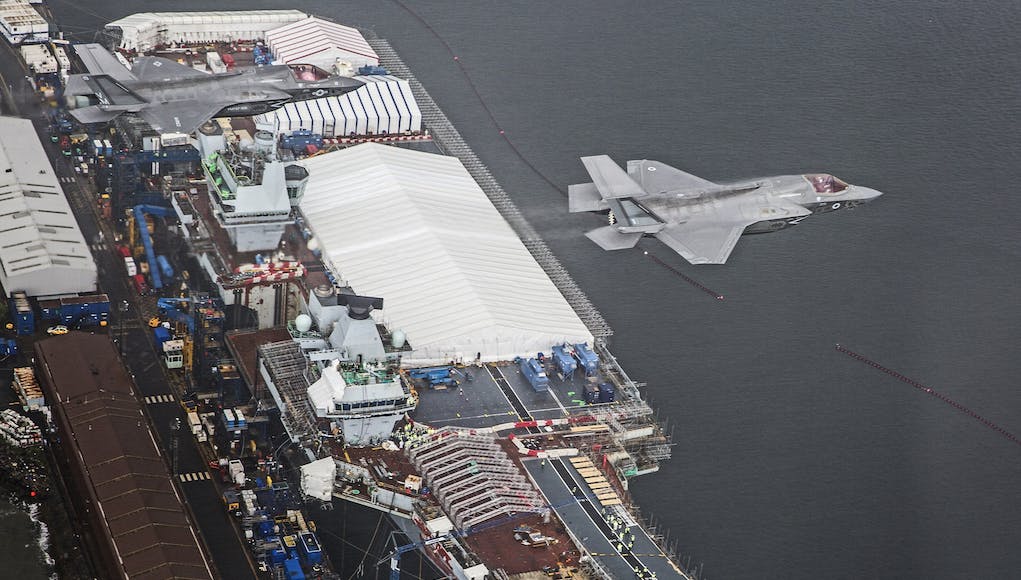 The future of the Royal Navy and Royal Air Force combat air fleets, the F-35B, flew over their future carriers and RAF Marham.

LIGHTNING LANDS IN THE UK

“The F-35Bs are the most advanced fast jets in the world. Whether operating from land or from one of our two new aircraft carriers, they will ensure we have a formidable fighting force.

They are part of our plan for a stronger and better defence: more ships, more aircraft, more troops available at readiness, better equipment for special forces, more being spent on cyber – to deal with the increased threats to our country.”

The fifth generation F-35B jets are the most advanced aircraft ever built for the UK and will be operated initially by 617 Squadron, Royal Air Force, known as ‘The Dambusters’ and subsequently by 809 Naval Air Squadron, ‘The Immortals’.  Combined, they will transform the UK’s ability to project UK influence overseas.

“Today marks a significant milestone in the nation’s return to aircraft carrier aviation and carrier strike.  Both ships have been designed from the keel up to operate with the F-35B and the RAF and Royal Navy are working ever closer to see fixed-wing aircraft once more operating from Royal Navy Aircraft Carriers.  I feel very proud to be part of it.”

The carriers will provide over four-acres of sovereign territory which can be deployed around the world, travelling at upwards of 500 nautical miles a day. Both ships are capable of carrying up to 36 F-35B Lightning II stealth jets.

Following the flypast at the QEC, the aircraft flew on to RAF Marham, Norfolk.

“It was a proud and exciting moment to have the F-35B Lightning II fly overhead RAF Marham for the first time today. Alongside Typhoon, the Lightning II will offer the RAF and Royal Navy a cutting edge front line strike capability and also offer the most powerful and comprehensive integrated sensor package of any fighter aircraft in history. I have no doubt the Lightning II will act as an inspiration for the current and future members of both services.”

This information comes from Air Cmdr. Harvey Smyth, the commander of the UK’s Lightning Force, as told to reporters at a conference in London.

Last Friday (2016-07-01) there was a roar in the sky over Bridlington. I quickly looked up and it seemed to me that we had just had a fly-over by a couple of Lightening II aircraft.

Does anyone know whether the flight of F-35Bs flew down the east coast when doing their fly-over of the future carriers and RAF Marham.

Looks like they’re having a garden party on the flight deck. With the summer we’ve been having I bet they’re glad they hired a marquee.

More than likely just the angle of the photos but the size of the aircraft makes the carrier look really small…..

That fucking killed me. Awesome!

Or down to the fact that the aircraft are up in the air, quite a distance away from the carrier, aircraft closer, that’s generally what happens.

My comment was a bit of “tongue in cheek” as it just looked strange….

Not yet seen a photo of the carriers that accurately portray just how flipping huge they are when you are next to one of them.

Rob I was at Limekilns on Saturday for a Classic boat event. Right next to the two Carriers. I remember the Real Ark and they are big trust me

Can see the jet on the ski jump, pretty good representation

I watched this fly past from Abercorn on the opposite bank of the Forth. Really impressive to see the two F35B over the carriers.

They’re large, but I wouldn’t personally call them a super carrier. I’ve been on a Nimmitz… QE class are smaller.

once upon at time we used to make our own

Indeed. And now we only make up to 40% of over 3000 of them instead of maybe 2-300 of our own. State of the art technology retained in the UK but 10 times the sales value for our industry and employment. Seems a much better deal to me.

I wonder where the APU is in the F35!