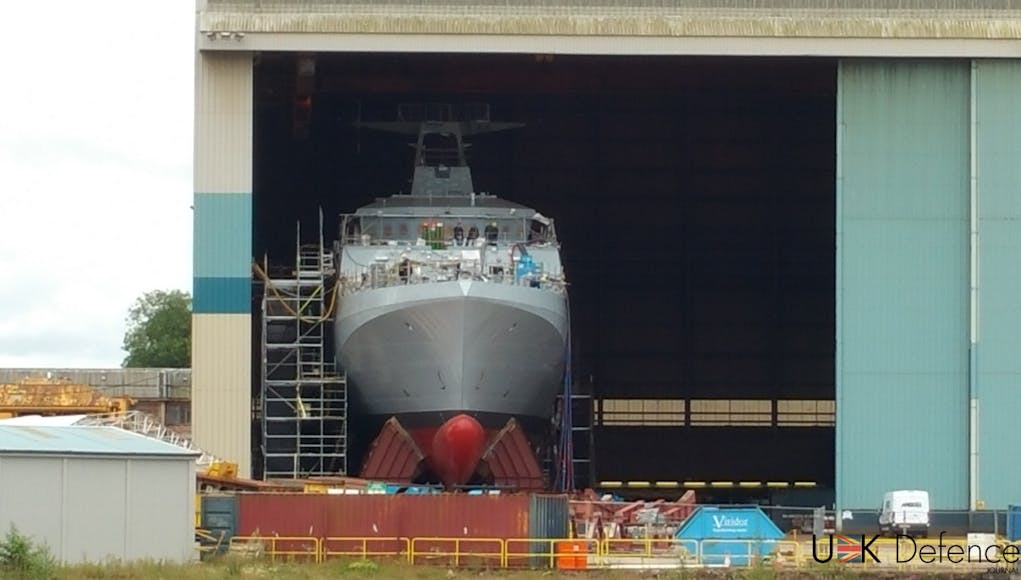 HMS Forth is a River class offshore patrol vessel under-construction on the Clyde, we’ve taken a closer look.

On the 6th November 2013 it was announced that the Royal Navy had signed an Agreement in Principle to build three new OPVs based on the River class design at a fixed price of £348m including spares and support.

In August 2014, BAE Systems signed the £348 million contract to build the three new OPVs on the Clyde in Scotland. The new Batch 2 vessels will be used for constabulary duties such as “counter-terrorism, counter-piracy and anti-smuggling operations”.

According to BAE Systems, the vessels are designed to deploy globally, conducting anti-piracy, counter-terrorism and anti-smuggling tasks currently conducted by frigates and destroyers.

Pictured is ‘HMS Forth’ and one of her three sisters in an early stage of build.

Steel was cut on the 10th of October 2014 and they are expected to enter service starting 2017, with the last being delivered by the end of 2018.

The 90 metre OPV is based on a proven BAE Systems design which is already in service with the Brazilian Navy and Royal Thai Navy. BAE Systems have modified the design, ensuring it meets the requirements of the Royal Navy in support of UK interests both at home and abroad.

The programme has however been the focus widespread concern at the significantly increased cost of the Royal Navy variant.

The vessels will include a modified flight deck capable of operating Merlin helicopters, larger stores and more accommodation for embarked troops. They will also be the first ships to be built with a BAE Systems designed, new operating system called ‘Shared Infrastructure’, which will be rolled out across the Royal Navy surface fleet over the next ten years.

By replacing multiple large consoles dedicated to specific tasks with a single hardware solution, the amount of spares which are required to be carried on-board is reduced, significantly decreasing through-life costs.

The programme will sustain around 800 jobs on the Clyde and keep BAE yards ticking over over between work ending on new 70,600 tonne carrier HMS Prince of Wales and construction beginning on the first Type 26 frigates.

HMS Forth and her sisters will enter service from 2017.

Is the propulsion system designed for hot countries?????

See it every few days driving along the clydeside

I love it already

Pricey yes, but it doesn’t bring some advantages to the navy. They will have lower manpower requirement than the frigates/destroyers, but can do pretty much all the tasks that they are doing today.

But they’re not replacing frigates/destroyers, they’re almost certainly replacing the existing Batch 1 River class OPVs on a 1-for-1 basis. This article might also be potentially out of date soon since SDSR2015 added another 2 Rivers to the build but contracts probably aren’t signed for those yet so not 100% certain to go ahead. If they do then one will probably replace the single River batch 1.5 (Clyde) and the fifth will be genuinely incremental. The ships that hopefully “will have lower manpower requirement than the frigates/destroyers, but can do pretty much all the tasks that they are doing today.”… Read more »

From what I understood for policing roles (anti piracy /smuggling operations), the batch 2 rivers are far better suited than batch 1’s. Policing roles is pretty much all the main warships are undertaking currently, outside a bit of flag flying / war games. Which means the batch 2s will provide a useful boost. What the role of T31’s will be is unclear in my mind. I assume they will be more war fighters, which means they need to be decently armed etc, which we obviously need should something go wrong in the world, but for today’s tasks it isn’t needed.… Read more »

I’d build more River class and Type 26 than Type 31. Either it’s hot or not. Peacetime patrols take crews away from training for war. So it makes sense to limit the ship and crew to what is required, to free up other ships and their crews for training, rapid response and exercises.

US, UK and France commit to increase naval cooperation