The Royal Navy say that the lightweight Puma drone  is undergoing its first operational testing on Albion’s autumn deployment to the Mediterranean as its operators from 700X Naval Air Squadron’s Phantom Flight – normally based at Culdrose in Cornwall – develop new tactics and work out how it, and other unmanned aerial systems can be used side-by-side with other Royal Navy vessels and equipment.

Puma provides the operations team with extra ‘eyes in the sky’, feeding back a live image in various weather/environmental conditions allowing commanders to make quick and accurate decisions, say the Royal Navy. “Just over 4½ft long, with a wingspan of 9ft and weighing as much as six bags of sugar, Puma flies for up to two hours potentially monitoring an area of up to 270 square miles of ocean – that’s larger than the size of Greater Manchester. Given its size and weight, the small drone can be launched from Albion’s sprawling flight deck, or from the open decks of her much smaller landing craft.

It requires just three sailors: a vehicle operator to control the camera in flight, a mission operator to pilot/navigate the Puma and a Flight Commander who integrates the drone with the ship and other aircraft in the area.”

The Royal Navy say that, with a top speed of over 50mph, the drone can keep up with and track fast inshore attack craft threatening Albion or her task group, or ‘go-fasts’ used by drug-runners to traffic illegal narcotics, providing high resolution images and video for intelligence purposes, and provide oversight of Royal Marines as they are carry out raids.

When it comes to AEW from a carrier group should we not be able to deploy 10-20 of these at low cost in a protective bubble around a task group and use massive sensors to track heat signatures 200 miles outside of a task group. The same for the surveillance over the English Channel, why do we not have drones autonomously tracking every square mile if the technology is available.

What about 4/8 Schiebel Copters S100? They have optocal and radar payload plus other though the SAR is down looking rather than air: https://www.thalesgroup.com/en/countries/europe/united-kingdom/markets-we-operate/defence/air-systems-uk/isr-air/imaster#modestosuit Also could attach a martlet to it to take out anything it needs to from a distance.

Or AWHERO already trialled in MUM-T with both Wildcat & Merlin has radar and EO
https://www.leonardocompany.com/en/products/awhero

Does the picture function work? 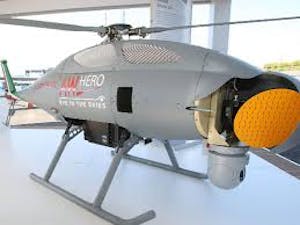 That’ll be a yes

Around a Carrier Group or a large naval group as you say we should definitely develop that ability to have drones like that. Around the UK though we should build military satellites in orbit to constantly track all movement around the UK to a high degree of accuracy

Does the British army have any drones of this sought. Seems something of this size and capability? Would come in very handy on the back of a Ajax or Jackal.

Desert Hawk II and III? They seem similar in size but I don’t know of their capabilities.

Do we still operate them? I thought they where taken out of service along with the hornet after Afghanistan.

True, maybe not then. I’d read that that was the plan, but also that the 32 RA disbandment was cancelled. Just looked at the army site ( never the best for accurate info ) and they mention Puma and Wasp?

Fair enough then. Although I don’t understand why the RA have such control over such a relatively small drone. Surely they would be better implemented in to the units that will use them. Like recconisance and actually gun regiments in the RA. As opposed to waiting on a detachment from a single regiment.

I’ve read of a rumour that the Jackal “Light Cavalry” regs might get involved.

As for the RA, I suspect it’s part of the battle between corps to be custodians of a role, and, sadly, having to justify their existence to the useful idiots in HMG to prevent their regiments demise.

Black Hornet was reintroduced to service about 3 years after being withdrawn.

Ajax / Ares are currently taking part in manned – unmanned trials to integrate land and UAS. Ajax is designed to have UAS as part of its ISTAR capability.

Ah that be good.

For the channel monitoring, what about the Watch Keeper drones? I seem to remember reading somewhere on here, that we have 40+ of these with a cumulative airtime of 3,000 hrs over the last 10 years – clearly someone needs to unpack them before they deteriorate!

I think they’re worried if they do unpack them they’ll just crash.

Or someone will realise they’re a bag of shit, and fire someone.

Watch keeper has been used, it was openly reported on various websites and news channels.

Could these be used from frigates and OPVs, to supplement existing ship and helo based surveillance? Also, could they be weaponised? Even as a “kamikaze” against threatening fast attack craft?

Does this not make HMS Albion an Fixed wing aircraft carrier (technically)?.

Julian
Reply to  Mark B

Ssshhhh … or you’ll have some idiot in government thinking “hmmm, 4 fixed wing carriers? That seems excessive, 2 should be enough. Maybe we could sell off QE & PoW to get the number down”.

How are these drones recovered?

Probably bring them to a stall over the flight deck and let them bellyflop. We are talking something smaller and lighter than a camcorder.