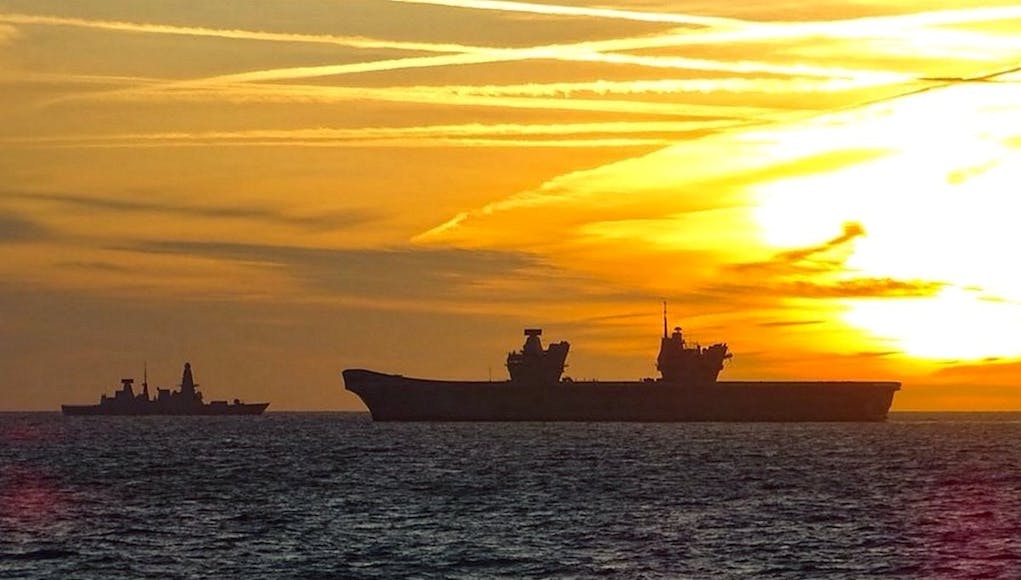 “From HMS Queen Elizabeth going to sea and entering her homeport of Portsmouth for the first time, to HMS Prince of Wales being officially named by the Duchess of Cornwall. This week, not only have we celebrated the commissioning of HMS Queen Elizabeth into Her Majesty’s fleet, but I was so proud that the ship was formally accepted by our customer.

The Aircraft Carrier Alliance has brought together the very best of British industry. I’m immensely proud to be part of the team that has provided our customer, the Royal Navy, and the Nation with the most powerful surface warship ever built in the UK.

The UK has pioneered the design of aircraft carriers, from the first flat top warship in 1918 to the first ‘island’ control tower, ski-jumps and optical landing system. Almost 100 years later, the Aircraft Carrier Alliance is again pushing the boundaries of technology with the Queen Elizabeth Class carriers – 21st century ships for a 21st century navy.

The Queen Elizabeth Class can fly 72 fast jet sorties per day – which can be increased if needed – and will give the UK a world class carrier strike capability for many years to come. She also has increased survivability because of the separation and distribution of power generation machinery throughout each ship.

The ship’s Artisan radar can track up to 800 potential targets at the same time and cut through radio ‘clutter’ generated by the equivalent of 10,000 mobile phones. The long range radar can track up to 1,000 contacts across a 250 mile radius both in the air or at sea. It’s an application of technology that’s already been proven on the Type 45s, but this time is linked to the Carrier’s organic capability to control a wide area of air and sea.”

The Queen Elizabeth class mark a change from expressing carrier power in terms of number of aircraft carried, to the number of sortie’s that can be generated from the deck. The class is estimated to be able to sustain a maximum sortie generation rate in surge conditions of up to 110 sorties per day according to an engineer we spoke to when on-board HMS Queen Elizabeth, but this was just an estimate after all.

Surely a contender for forces photograph of the year?

The spokesmen for the Shipbuilders and M.O.D. always quote that the two new Aircraft Carriers are the most powerful ships to enter Royal Navy service…The F.A.A. Strike aircraft of the sixties and onwards were Nuclear capable and so far more powerful than these new carriers ….If they keep repeating this claim they will even start to believe it!….Even the Type 21 Frigates were Nuclear capable.

Robert-if Nuclear capable is the criterion then surely the title goes to the Trident Subs?

Cheers Robert and all the best for the coming season

Many thanks and all the best to you Geoff.

Sorry but do you think the outcome would be if 12 Phantoms and 12 Buccaneers came up against 24 F35’s ? As much as I love the Buccaneers in particular. Yes it’s an unfair comparison but that’s the point being made in the article.

Indeed. The chances of any planes of a squadron each of Phantoms and Buccaneers actually getting through to drop a WE 177 or variant, these days, are so close to zero as to make no difference. It’s why the UK tried unsuccessfully to develop a stand-off delivery system (missile, multi-stage), and went for Polaris and Trident. The only use would be as tactical nukes, and that’s pretty well gone out of fashion.

Even being able to carry a cruise missile would likely be not much of a deterrent, lower speed, shorter range, bye bye.

What it doesnt’ state is how many jets it needs to actually achieve these 72 sorties a day, over even the course of a few weeks or months.

The US states the ‘B’ has a sustained sortie rate of 2 per day.

Not correct. The USMC requirement (that was met) was for the f-35B to fly 3 Marine defined sorties in one day.

Talk of “sorties per day” means absolutely nothing uness the “sortie” is defined (how far, carying what, and doing what) and the number of aircraft sustaining that sortie rate. Aircraft will go u/s, so how many in reserve as well as how many in total.

So assuming 3, it means 24 jets are required, that is on the assumption that all of them don’t need repairs etc during the period which seems unlikely, so i assume probably double that to sustain strikes over a period of months.

48 jets on board appears to be something that will happen once in a blue moon, considering the number of planes we were capable of sending to the ISIL conflict.

Take it up with the Americans Ronald….. I’m sure they will be delighted to hear from you

Bollox, the Ark & Eagle were no more or less “real” than the Queen Elizabeth.

As for mail, RN warships get email 24 hours a day, in any part of the world.

Yay! Even the Troll would approve. Or maybe not.

Where’s TH when you want him?

Without internet access and deported to deepest Mozambique hopefully.

Oh wow are you guys missing him ?

I do not think there would be many with the appropriate skills to maintain them!

At least if they had Swordfish you could call it an aircraft carrier !

I’m still not sure this has been answered. Why can’t the carriers operate something like this for COD etc:

I served in the Royal Navy in the sixties when we had a fleet to be proud of . I was on the Eagle for part of my service ,and it was fantastic to watch the Buckaneers and Sea Vixens flying off . I was also aboard when they tried out the Harriers for the firs time .

Love it.Yep the British had a very respectful fleet. The government decided to spend the money elsewhere. it has deteriorated… Now their only two carriers depend on One kind of airplane. And they are having a difficult time paying for a few F35s. I cruise d with Harriers working on them before I became a pilot.

interesting article and I agree that it is probably based on 24 jets flying 3 Sorties aper day. It should be noted that the RN are on record that each QEC can take 70+ jets at full load (plus its Helo’s), so if the will and aircraft were available it could deliver a massive punch.

Not going to happen I know and is wasteful in my opinion, but there you go.

But still a massive increase in capability over the Invincible, Harrier combination.

The flexibility is there if needed.

Not sure our operational capacity of 24F35Bs onboard QE or POW will be able to deliver 72 sorties per day. Maybe we might actually have to get more than 48F35Bs in active service?
Lets see what next SDSR says about that. I reckon we will be lucky if the bean counters at the treasury give the go ahead for anymore than 24 F35Bs.
summary
buy more f35bs and allocate them to the FAA squadrons to fly. We need at least another 48 of these aircraft to be in service by 2026-2027

couldnt agree more Mr B, I suggest we need an operational fleet of at least 138 F35B’s and then some of those fancy new UAV’s that BAE are developing to go alongside them. This will allow us to put 64 on each carrier if needed and/or work with 2-4 UAV’s (taranis / Matrox) to take the payload further into enemy territory whilst in a standoff position. This would give the UK a creditable fighter bomber force and going back to the need for a new SDSR – provide a key element of re-inforcement for mainland Europe in our new “rapid… Read more »

I am a strong defender of defence and like much of what you say Pacman, especially about ship building and drumbeats is great, but if we believe the government’s numbers about 138 airframes being needed to provide 4 operational + 1 OCU squadron in order to leave enough sustainment fleet and replacement airframes left over to keep that all up to strength over the full life of the F-35 program then that’s 2.3 airframes for each [email protected] If we count any available OCU craft as [email protected] in the event of something major that still means upping the buy from 138… Read more »

one underrated factor in sorties is pilot fatigue. Because the f-35 is a quantum leap in sensor fusion, the pilot has to do a lot less things compared to operating say a harrier. hell landing is basically auto pilot compared to the harrier which needed “3 hands to land.”

Lots of good comments, with little ‘negativity ‘ for once! Kirk is correct in saying that F35 availability should be much improved over earlier types, not only from the pilots point of view but also due to the preventative nature of the maintenance regime. Also, would not ‘surge’ in time of crisis involve ALL available planes and pilots? Of interest, the French expect to acquire a maximum of 60 Rafaela M for their Navy, with 24 routinely deployed on CDG (when available and not in refit/repair) so fielding 36 – 48 F35 on a QE (or 24 on each If… Read more »

Surely the number of sorties flown in one day by F35B,s depend on that aircraft carriers ability to remain afloat for 24 hours in the face of constant hostile action against it and its carrier support group. It has to be more efficient to have the missile systems required to defeat the threat to the ship mounted on board rather than scattered around the radar horizon on a insufficient number of escorts some of which may become casualties as the battle progresses, or have to be detached for other missions. In view of the pathetically few escorts the Royal Navy… Read more »