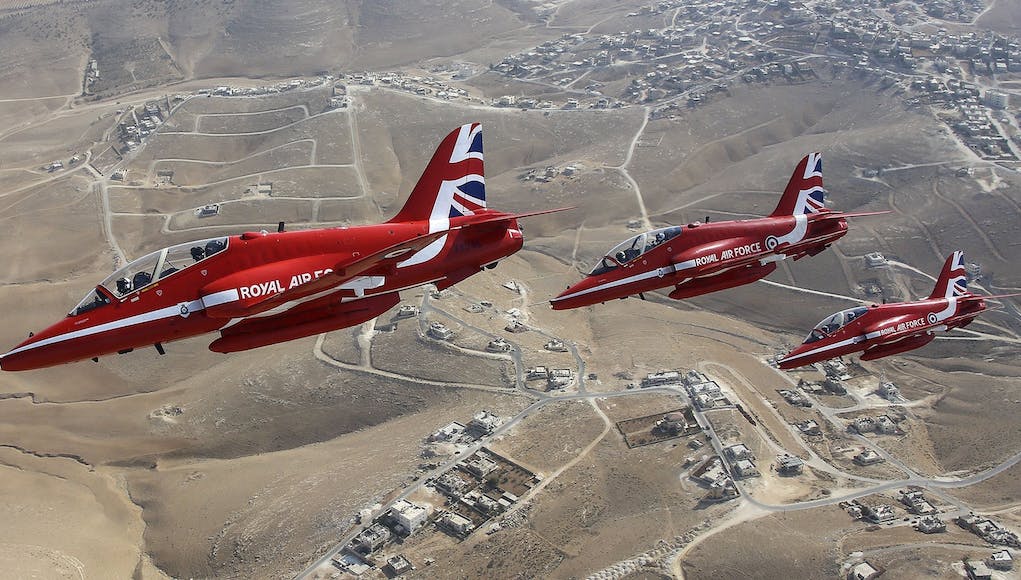 The Ministry of Defence have confirmed no new Hawk jets are needed by the Red Arrows for another 13 years.

A spokesman for the MoD said:

“The Red Arrows will continue to fly the Hawk T1 for more than a decade and there is no need to replace them until after their end-of-service date.”

In a letter to Prime Minister Theresa May, 142 MPs called for orders for replacements of the Hawk plane to be brought forward to save jobs at BAE Systems and keep production in the UK.

In their letter, the group warned that unless new contracts are signed soon there will be:

“Virtually no possibility to build any future Hawk aircraft in the UK.”

BAE Systems announced last month that it is planning to cut almost 2,000 jobs in its military, maritime and intelligence services to give it “sharper” competitive edge.

Currently, around 40% of a new Hawk is manufactured at the company’s site at Brough, East Yorkshire, and the rest at Warton and Samlesbury in Lancashire.

“By ordering a new fleet of planes to be used by the iconic RAF Aerobatic Display Team, the government will not only help to mitigate the job losses, but will also guarantee the continued production of the Hawk in the UK.

The age of the aircraft affects their reliability to perform, as has been seen recently at air shows where the Red Arrows have flown with a reduced number of aircraft in their formation”, the letter said.

Almost back to the Super Tucano idea.

Yeah even an experimental ucav version of the hawk to act as nothing more than a bomb truck in a low threat environment.

Perhaps BAE should offer the Red arrows the latest Hawk at a heavily discounted price as a one time offer…. after all part of the point of the Red Arrows is to be ambassidors to Britain and show off UK skills and manufacturing. Yes using the T1 shows with the right maintenance and care that the jets will have a long service life but not if you have no one left in the UK with the skills or manufacturing base to build a replacement when the time comes.

Afternoon
Hawk T Mk1a was wired for weapon integration (2x Sidewinder and 30mm Aden gun pod on centre line) to work with Phantom FGR Mk1 in the 1980’s.
Those days are gone.
Red Arrows are there to display flying excellence – demonstrating the flying training system of the RAF.
HMG sells flying training packages of which the Hawk is but one part.

That would be the Phantom FG1, FGR2 and of course the F3 variants.

Yes if I recall 88 were of this standard, paired with Tornado F3’s if it all kicked off.

A very simple very cheap force multiplier.
CFS qualified B1 and above flying instructors flying small cross section highly agile network fused (Link 16) aircraft. In the 80’s these aircraft were either parented by the Phantom (FGR series – thanks Mike) or Tornado F3 (Thanks Daniele) or direct via UKADGE to prosecute the bomber fleet escorts flying down from Northern Russia.

The Hawk has had a very long and successful life going through several regenerations. However with the new generation of trainers coming on line its reached the end of the line.

Replacement of Hawk for the Red Arrows poses an interesting question . Something cheap to buy and operate would be my suggestion.

The Hawk is far from reaching the end of the line…..the latest versions such as the T2 at valley are as good as it gets at the moment for modern fast jet training..

Not just the Red Arrows.

100 Squadron and IAM will also need replacements at some point, and 736 NAS if it lives long enough.

I think aggressor training is one of the jobs of the two additional proposed squadrons of batch 1 Typhoons Daniele.

Hi Daniele/John 100 Sqn (Red air aggressor) – the Hawk has had its day. sterling service and goes to show that you do not need a high end platform to produce realistic red air, just highly trained pilots who understand their aircraft. John – cost will be a problem. Cost per hour of legacy Typhoon will put too much of a strain on training budget so you will either have to reduce hours or vastly increase budget. Red air services are available though. 736 NAS – cost effective way of providing red air for ships, however I think the whole… Read more »

And long may they continue! SO proud of our pilots.

Didn’t I read somewhere aggressor training was being privatised??

Typical MP’s “thinking” and lobbying from BAE Systems … Waisting precious Defence money, purely to keep people in work is absolutely insane … What planet do these idiots live on!

Let the DTI pay for them in that case…..

When have MP’s ever cared about the defence of the realm?

Whenever I read of a base closure the local MP is not commenting on what capabilities, infrastructure, role that facility had and whether the wider defence of the UK is affected.
No, they comment on lost jobs and the economy.

The hawk has been a great success story for the UK and I do think we have missed a trick here. The Gripen has a large volume of British parts and perhaps we should move to this as our primary advanced trainer and fighter jet. I dont know enough about the training requirements to understand why we need so many hawk, but suspect this is an opportunity to rationalise the fleet onto Typhoon and F35b (and hopefully Taranis) or to bring in something a bit more modern like a Gripen that is cost effective and has combat utility. It’s a… Read more »

The only reason why we have so many hawks is because it is a legacy aircraft, 175 or something purchased by the RAF if I recall, when the RAF was of considerable size!

Evening all Trying to answer as many points from above: Hawk – cost per hr great value for money. Lead in for F-35 and Typhoon designed into aircraft. It is designed against the requirement, hence Oman, Saudi, Australia etc can use it (Including USN). What it lacks is thrust to weight, M-346 and other contemporaries are now built with twin engines. Is 28 enough? Depends what you want to use it for. Aircraft are now measured against availability and not numbers, if you can get 6 sorties out of one aircraft per day against 2/3 sorties in legacy platforms then… Read more »

With so many countries using Hawk now, surely, it is worth investing to design a new version as we have a ready made market? Why is it that nowadays the UK always says it is too expensive to do anything, and then buys the product from other countries that did invest? How does BAe expect to have any future if it never designs any new products? No one seems to think long term at all.

They have missed the boat with Hawk. Unfortunately they have not looked beyond the airframe they have and stick with a single engine platform that doesn’t have the growth capability required to keep it going. The major markets now are looking at the M-346 and T-50 which gives users cheap per hour costs but with flexibility because the design is new. Hawk design is still based on a solid 1970’s simple design based on a 25 year lifecycle. Who knew that nearly 40 years later it would still be going. You can only get so much out of something that… Read more »

Leo, the Hawk is still a very capable aircraft. The RAF’s new trainer’s are extremely good assets by all reports and will be key assets for many years to come However, despite the advanced systems of the current production aircraft, the airframe is an adaptation of a 40 year old design. You can only keep a design going for so long. Unfortunately BAE Systems has little interest in building manned Military Aircraft these days, if they did, they would have lobbied hard for Warton being the European assembly plant for the F35, possibly “the” most suitable high tech Military Aviation… Read more »

They do think long term, long term on how to destroy British heavy industry. This was their plan all along.

I believe the UK needs to concentrate on Missiles and Taranis going forward as we have great expertise and experience and can leverage the F35’s to work with Taranis. As for missiles – the Scandinavian countries are showing us the way at the moment and we should look to them. If we are going to replace Hawk with a similar product, which I personally dont think we should then I believe we should go for the Gripen E – as I believe that UK manufacturing has a high parts content and it could clearly be built in the UK as… Read more »

Evening Pacman27
Gripen E is a great platform but only single seat. We need a 2 seat trainer, even if only for pilot nav training.
You are correct in high U.K. parts in platform esp. for the avoidance of US ITAR.
Taranis – still nervous about it. Currently cannot see it being fully trusted, we like the man in the loop.

I’d suggest a British company get on with designing a new aircraft for the advanced jet trainer/light combat role so we do have a replacement. There’s plenty of others available, such as the Italian M-346 master or the Korean KAI T-50 Golden Eagle, either of which would look great in Red arrow red.
I still miss the Folland Gnat!

They WANT there to be no possibility of future aeroplane manufacture by a British company. The same as in all fields mind you (shipbuilding, steel making, train making, car making, truck making, wind turbines, aeroplanes, armoured fighting vehicles, etc., etc., etc.). So much so in fact that it is completely obvious that they have, and are, waging a deliberate and organized war against British heavy industry. They want us to have ZERO heavy industry in Britain (whilst other European countries have several). They want us to have to go cap in hand to a foreign company for everything from now… Read more »

So why are they, the they being HMG, doing this?

To make the UK so weak, divided, riddled with PC and devoid of national pride and motivation we just merge with and become an outer region of the EU?

But, isn’t that what has been happening already?