The frigate HNoMS Helge Ingstad and the tanker Sola TS collided in the Hjeltefjord in the early hours of the 8th of November 2018, eventually resulting in the loss of the frigate.

Officials have now released a report containing the results of the first phase of the Accident Investigation Board Norway’s investigation into the collision involving the Norwegian frigate Helge Ingstad and the oil tanker Sola TS outside the Sture terminal in November 2018.

Investigators determined that the incident, that resulted in the loss of the frigate, was the result of safety and training issues within the Norwegian Navy.

According to the report summary:

“HNoMS Helge Ingstad sailed south at a speed of approximately 17–18 knots with the automatic identification system (AIS) in passive mode, i.e. no transmission of AIS-signal. The frigate’s bridge team had notified Fedje Vessel Traffic Service (VTS) of entering the area and followed the reported voyage. Sola TS had been loaded with crude oil at the Sture Terminal, and notified Fedje VTS of departure from the terminal. Sola TS exhibited navigation lights. In addition some of the deck lights were turned on to light up the deck for the crew who were securing equipment etc. for the passage.

In advance of the collision, Fedje VTS had not followed the frigate’s passage south through the Hjeltefjord. The crew and pilot on Sola TS had observed HNoMS Helge Ingstad and tried to warn of the danger and prevent a collision. The crew on HNoMS Helge Ingstad did not realise that they were on collision course until it was too late. 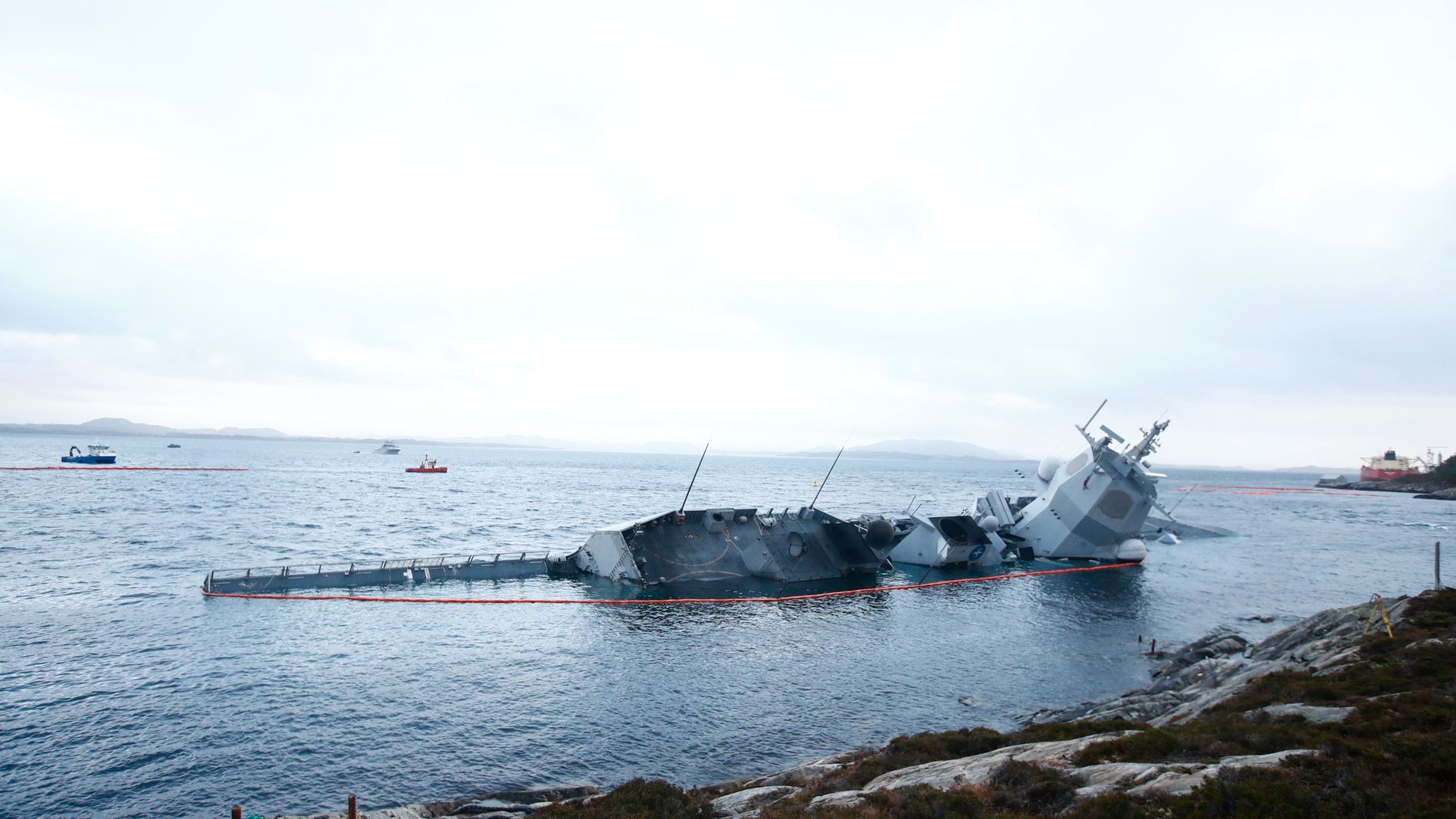 The AIBN’s investigation reported that the situation in the Hjeltefjord was made possible by a number of operational, technical, organisational and systemic factors:

Of course, this would NEVER happen in the RN! One hopes!

Looks to me like the investigation report is an attempt to paint the Norwegian Navy in a slightly better light by highlighting errors from the tanker crew. The errors from the vessel unberthing in this case are marginal factors considering the frigate was proceeding at 17-18 knots ! That is no way a safe speed in that channel with that traffic and proximity to land. The Frigate is the overtaking vessel and is therefore the give way vessel. The Frigate was not maintaining an adequate look out ”…by sight and by sound and all available means…”. I would apportion about… Read more »

They say that they re-creates the incident using another Norwegian frigate and the tanker and got confused as they couldn’t see the nav lights also the VTS didn’t register the frigate.

All in all whilst the navy needs to up its training the all need a healthy shake up and should be lucky nobody was killed.

I wonder if the Norwegians would like to get on bandwagon buying the Type 26 Frigate to replace their lost ship and get a few more to beef up their Navy!
Also they should replace their rubbish NH90 with more EH101 Merlins which they have bbought for their SAR.

Reminds me of when we entered the Solent at night in a gaff sloop gog few years back (no mod cons / radar) and saw commercial navigation lights a ‘long way off’. After a time we decided the vessel could not be moving and proceeded across the channel – only for this very massive craft to commence looming out of the night at what, in the lighting conditions, seemed a rapidly approaching and ever increasing rate of knots, what it had no doubt been doing all along. Got across at our ponderous rate fairly safely, but did occasion a well… Read more »

Had a similar experience when I was on TS Lord Nelson about 20 years ago (God how did that happen!!). We were sailing near the Canaries and I was on the helm when we sighted a ship on the Starboard bow. Visibility was good, dark night and plenty of stars but this guy just kept coming. We were running standard Navigation lights for a sailing vessel. Anyway the OOW and I were getting nervous as the other vessel was not showing any signs of having seen us, so the OOD turned the mast illumination lights on. Looked very pretty in… Read more »

Still very shocked at how quickly she was lost to the water.

Does the report say anything about the rumours of shoddy welding on the bulkheads and the doors not being water-tight etc?

The part 2 of the report will cover the other contributing factors that you mentioned.