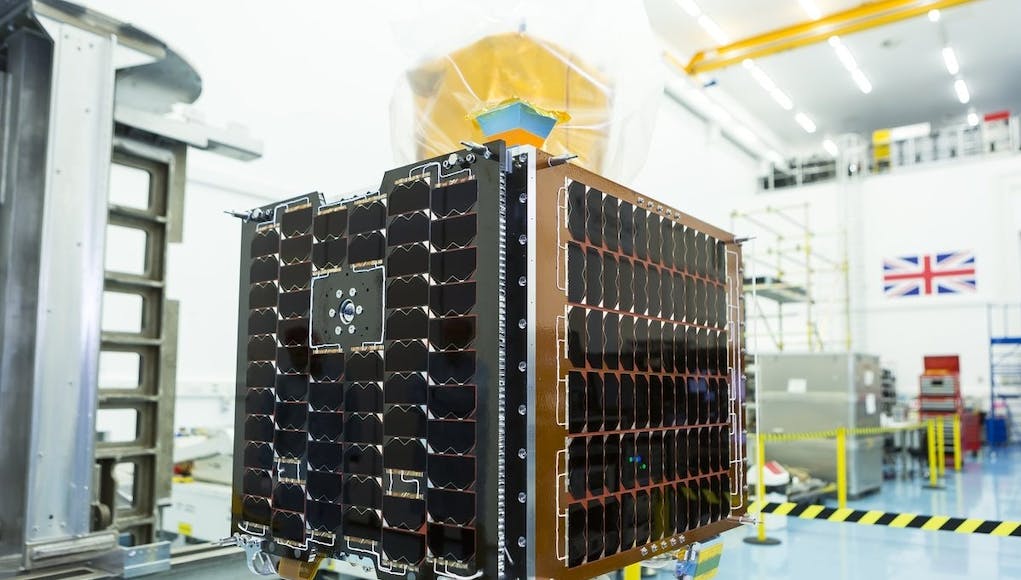 The RAF say they have been working with the MoD’s Chief Scientific Advisor, Defence Science and Technology Laboratory and UK industry on the programme to deliver high-quality imagery and 3D video footage from space. The first satellite of its kind, the Carbonite-2 has completed its initial checks and is now supplying detailed imagery and footage.

The MoD say that the programme could eventually see high-tech satellites beaming video directly into the cockpit of fighter jets, improving the situational awareness of UK pilots by giving them the very best imagery and information anywhere on Earth in real-time.

“It’s entirely fitting that we have launched this highly capable satellite in the centenary year of the Royal Air Force. We have always been at the leading edge of technology, constantly innovating and expanding our horizons. This satellite will not only expand further the RAF’s growing Air and Space capabilities, it will I hope also be an inspiration to those young people looking towards technology as a way to realise their potential.”

“The success of this satellite shows we are looking far beyond the skies when it comes to defending our country. We live in an increasingly dangerous world and satellite technology like this give our Armed Forces the extra advantage of quick video surveillance to keep us safe from a range of future threats, whether that’s an airborne terror attack or a troop of tanks closing in on a foreign border. Investing millions into Britain’s most innovative companies is helping us propel the UK forward in the space domain.”

“Carbonite-2 will play a crucial role in the MOD’s understanding the potential for and shaping the RAF’s vision of an international constellation for the future. This could unlock new opportunities using a range of sensors and ground stations, which has the potential to support emerging crises and combat intensifying threats, giving the UK the opportunity to lead in the area with several close allies having already shown interest in the concept.

The MoD invested £4.5m into the programme with Surrey Satellite Technology just eight months ago, and the satellite was successfully launched from Sriharikhota in India.

The 100kg spacecraft, roughly the size of an average household washing machine, carries an off-the-shelf telescope and HD video camera, both of which have been adapted for a space environment and integrated into a custom-built framework. The imaging system is designed to deliver high-resolution images and colour HD video clips with a swath width of 5km.”

“The MoD’s science community is one of the driving forces of the UK’s space revolution; and this is an excellent example of defence science and technology working with industry and the Royal Air Force to deliver affordable and pioneering space technology quickly for our Armed Forces.”

“Space has applications across every part of our economy and is a vital part of our national capability. British companies like SSTL are the best in the world at what they do, making them a fitting partner for the RAF.”

“The MoD already has a world-leading role in satellite technology, with Skynet 5 delivering a resilient, sovereign capability until 2025, supporting secure communications for troops, command centres and cutting-edge unmanned vehicles. Beyond that, the MOD is fully committed to launching Skynet 6a and is looking to change defence structures to bring better operational coherence to activities for the future.”

Excellent – using defence as a spring board for wider industry!

Yes, and satellite coverage is the first line of defence for our new carriers. Good move all round.

I’m sure similar technology will allow missiles to be launched and then watching them land on their target in real time.

I’m disappointed that we’re not launching our own satellites and are instead paying India to launch them whilst also subsidising their space industry.

This madness has to stop and we need to invest more in our space programme so we can independently launch satellites of this nature.

Daniele Mandelli
Reply to  A. Smith

Agree. How about RAF Spadeadaam, where our last ICBM’s were to be based.

UK never had any land based ICBM.

Not ICBMs, but 60 Thor IRBMs were based in the UK between 1958 and 1963, operated by RAF Bomber Command under a UK-USA dual key arrangement. These missiles had a range of 1,500 miles and a Megaton warhead.

Thanks, but I was aware of that.

Cheers to be corrected on terminology.

In an agreement with the US, the US was to build ICBMs and the UK IRBMs. You had Black Arrow and another one, but then canceled the program. A former defense minister around 1958 said the UK would go to an all missile defense force. This resulted in cancellation of some great aircraft programs. But then the missile were cancelled. Some very stupid, almost treasonous defense management in my opinion.

Stephen G.
Reply to  A. Smith

The UK launched a satellite with its own launcher in 1971, then inexplicably left the filed wide open to France and others. You are ight, the UK need to build its own launcher, which is not a very difficult project.

Right. Who is controlling this? The MoD and RAF gave up control and ownership of Skynet years ago when 1001 SU RAF was disbanded and the SGS at Oakhanger, Colerne and Defford were passed to the private company Paradigm, who provided all Satcom services from that point, as usual saving MoD up front cost of purchase but probably costing more in the long run. The control centre at Corsham and the SGS at Colerne and Oakhanger are still run by the contractor, though still MoD owned sites. Curious who controls this satellite. If it is imagery related then that is… Read more »

Good God help us all!

Yes. Why have satellites like many other world nations when we can all go and live in a cave?

Could need as many as 4000 of these for live coverage of any spot on earth, always available. At a cost of ~2m each, if launched from a falcon heavy, that would be 8 billion-ish.

Colossal yes, but what a resource to exploit.

India???? I do understand that only certain parts of the globe allow you launch sites for the specific orbit you want.

Very good selection of location for the image in this article, very cheeky. Im sure you all recognize HK.

I have a pretty good handle on ships, aircraft etc now but how do the U.K.’s military satellite assets compare with our allies and potential adversaries? As with every other military resource I assume any comparison with the USA is pretty pointless, as in there is no comparison, but how about France, Germany, Italy, Australia, Canada, India, Russia and China? Does anyone know re comparisons with some or all of those countries? I suspect this might be an area where comparisons are difficult or impossible due to a lot of stuff being classified. Given France’s very close-to-home launch capabilities I… Read more »

I believe the UK only has Communication satellites, where’s other nations also have Sigint, Elint, Photo Surveillance and Sea Surveillance Satellites, France being one. Due to the 5 Eyes relationship GCHQ does not have its own Satellites for Sigint but pays into NSA’s budget for the right to task their satellites for periods of time. These were one time Magnum satellites but no are probably something else. The UK did go down the route of developing its own Sigint satellite capability in the shape of Project Zircon in the 1980’s but, what a surprise, the ruinous costs sent the treasury… Read more »

Thanks Daniele, most informative.

Australia is a member of the Five Eyes sigint community and hosts major installations including the US-Australian Joint Defence Facility Pine Gap (JDFPG) with agreements in place for access to high resolution military surveillance satellite imagery. The Australian Geospatial-Intelligence Organisation (AGO) is the lead imagery intelligence organisation and provides geospatial intelligence for the ADF. The ADF’s 2016 Integrated Investment Program has earmarked $3bn–$4bn from 2023 to 2039 to develop an indigenous satellite imagery capability. This will see the AGO’s ability to collect and use imagery substantially enhanced, including imagery from satellites and analysis for operational imagery and targeting. In the… Read more »

What news of the facility at Geraldton?

A notice seeking a contractor for upgrades to the installation at the Australian Signals Directorate station in Kojarena, 30km from Geraldton was posted to the US government’s Federal Business Opportunities website in January 2017. The Centre for Defence Industry Capability advised Australian companies were able to tender. The tender is for the construction of an electronic equipment building, antenna foundations for satellite terminals and other supporting infrastructure. The electronic equipment building will be concrete-framed with reinforced concrete or precast wall and roof components, supported on conventional shallow concrete foundations. The project has an estimated cost of $US5 million to $US10… Read more »

Cheers. All well and good then Sigint wise.

We do not have sovereign launch capability, which is a serious weakness- hopefully, Skylon will deliver this in due course.

A. Smith
Reply to  Ian Skinner

I was thinking about Skylon too and other possibilities are of using a heavily modified A380 and launching rockets in a similar fashion to the Pegasus launcher and for the UK Space Agency to invest in creating it’s own version of the Stratolaunch aircraft.