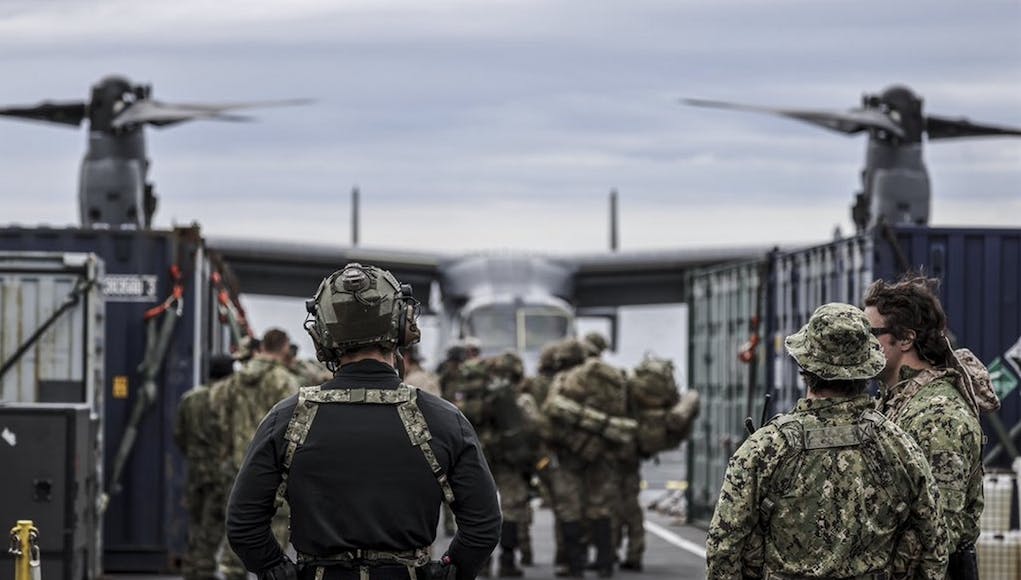 The Littoral Response Group deployment will is being tested in Exercise Highland Dagger, a 11-day tactical exercise, before moving into northern Europe and the Baltic region for operations with NATO allies.

The task group has so far been working closely with the USS Iwo Jima’s Amphibious Ready Group off the coast of Scotland, on the US-led Exercise Ragnar Viking off the Norwegian coast and on operations in the North Sea.

“The value of this training with our US allies cannot be underestimated. It allows us to test, prove and learn from even the most simple of daily tasks up to concurrent helicopter load lifting and replenishment at sea between three very large ships in very close quarters. It’s a skill set not many nations can carry out as efficiently and safely as the Royal Navy and US Navy.

It has been a genuine pleasure to have worked with our US partners, not only over the last five days but also during the weeks and months of planning that preceded this. Their humour, enthusiasm and incredible generosity shows that the special relationship between our two nations and armed forces remains as strong as it has ever been.”

What are the American thoughts on our Royal Marines, anyone know.

There are a few videos on Youtube of US serving soldiers, USAF\Navy airmen, and veterans who watch what our capabilities are like and talk about what they see!

US Marine here. I’ve worked the the RMs several times over my career. Absolutely love the fighting mentality of RMs! I don’t think I’ve ever met an American service member who didn’t enjoy working with their British counterparts.

US Marine here (apparently there are a few of us floating around here). I’ve worked with the SCOTs, 2 and 4 Rifles, and the RMs. I was overseas for 8 months and we had British officers integrated into our staff sections. We had nothing but good things to say about them, tough and intelligent guys with a good mindset and more than willing to fight (as well as the characteristic dry/gallows humor you Brits are known for). I’d be happy to go into combat with them again. I only wish they were compensated better for what they give for their… Read more »

A year before my father then (subsequently K-coy, 42cdo).

Thanks for your service Alan, OAMAAM.

Did you have an old-style US helmet during training too? My Dad said trained Booties didn’t wear helmets because they were tough enough to take a bullet to the bonce and keep fighting. As a kid, I believed him!