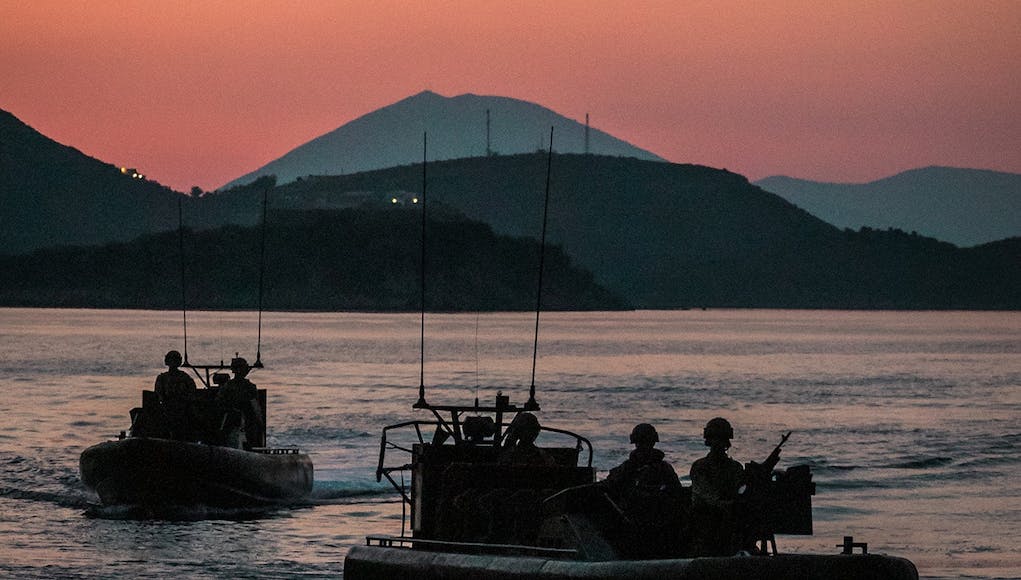 Royal Marines Commandos have stormed the coastline of Albania as part of an exercise with NATO allies, say the MoD.

According to a release, Alpha Company made amphibious landings along the Albanian coastline while Bravo Company, Recce Troop and members of the Commando Logistic Regiment have been operating in the mountainous Bize region.

“The idea of the exercise is to strengthen ties with Balkan members of NATO but also provide commandos with challenging environments to train in. On the coast, Alpha Company used hovercraft and Offshore Raiding Craft from RFA Lyme Bay to launch dawn training raids on a disused Albanian Naval Base alongside their Albanian counterparts.

To the east of the capital Tirana, in the mountainous terrain surrounding the Bize training area in Dajti Mountain National Park, Bravo Company and Recce Troop worked closely with Albanian personnel. This included Close Target Recce (CTR) – observing a target of interest in a covert manner – and vertical assault training, which is a speciality of the Royal Marines.”

“Bize provides the perfect terrain for this kind of training and has been of great benefit to us and the Albanian forces. I was here in 2014 and it’s great to be back here with our Albanian partners.”

I know its bad of me, but it makes a change from Albanians landing from small craft onto British beaches

Why is it bad?

Again shows what the RFA can do, we have lost a third of RFA ships in the past 10 odd years! They are a great force multiplier and should be protected not scrapped or sold! The government think buying 4 tide class tankers/support ships make up for the loss of all the other RFA ships! It doesn’t! And we will be losing more soon with no replacement! 11 RFA ships is not enough! No doubt we will be losing the Fort ships soon also and RFA Argus will no doubt be going with no replacement and that ship has been… Read more »

Sir
In an excess of zeal, HMG marine forces captured the training target, then proceeded to capture the remaining territory of the target area national space. Request instructions on how to proceed.
Yours faithfully,

I work with Albanians regularly. Frankly they are some of the nicest and hardest working people I have ever met. Generous to a fault too and hard as nails.

Absolutely. I was just having fun. The Italians learned how capable the Albanians were.