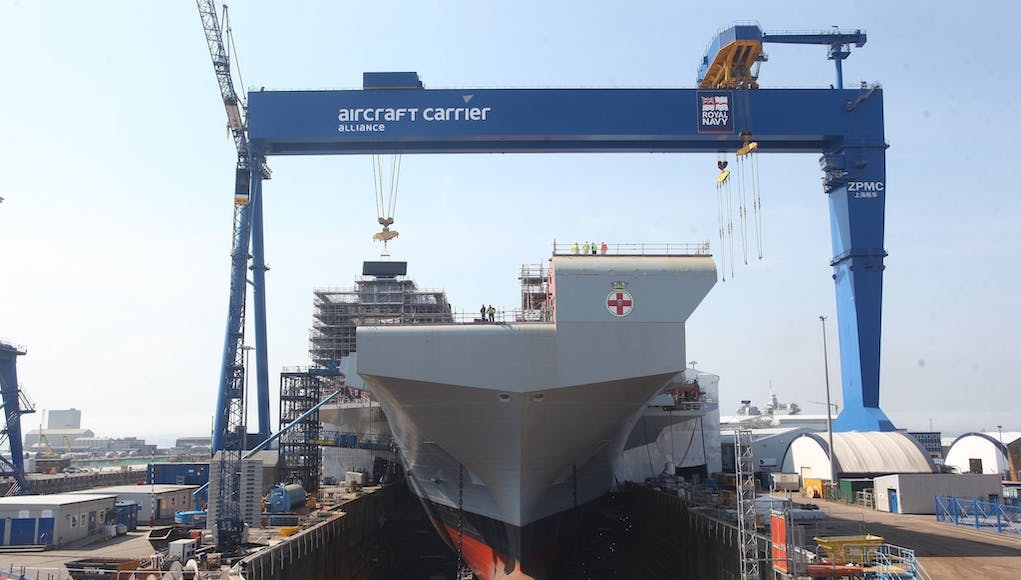 The announcement was made at an event at the Institute of Directors in London just two days before the warship is officially named in Rosyth.

Captain Moorhouse is a former Commanding Officer of HMS Ocean and HMS Lancaster, known as the ‘Queen’s Frigate’ because Her Majesty is the ship’s sponsor.

He will take over next year from Captain Ian Groom, who is serving as the Senior Naval Officer on board HMS Prince of Wales during the carrier’s build programme.

“I am honoured to have been appointed as the first seagoing Captain of HMS Prince of Wales, a hugely exciting job to be in at such an important time for the Royal Navy.

Seeing our sister ship HMS Queen Elizabeth make her debut in Portsmouth last month was an amazing sight and I look forward to one day bringing HMS Prince of Wales home to the same warm welcome.

Until then the ship’s company in Rosyth will continue to grow and they have much to be proud of in all the work they have done so far, working with our civilian industry partners to bring this ship to life.”

HMS Prince of Wales is preparing for her official naming ceremony this Friday, to be attended by the ship’s sponsor Her Royal Highness the Duchess of Rothesay.

HMS Prince of Wales, will benefit from ‘lessons learned’ in the construction of HMS Queen Elizabeth.

People we spoke to on-board the vessel told us that building HMS Prince of Wales has been “20% to 25%” faster than building its sister ship HMS Queen Elizabeth. When on HMS Queen Elizabeth in December last year, we were told that the build of HMS Prince of Wales was expected to be around 8 months quicker thanks to “lessons learned” in the build process.

Defence Secretary Sir Michael Fallon earlier announced that HMS Prince of Wales will be officially named at a ceremony in Rosyth on the 8th of September 2017.

The announcement was made during a visit to HMS Queen Elizabeth at sea. According to an ACA press release:

“The Defence Secretary landed by Merlin helicopter on the deck of the new aircraft carrier HMS QUEEN ELIZABETH, which is currently on sea trials off the coast of Scotland. He met with members of the crew and thanked them for their contribution to UK defence.”

“Our carrier programme is a clear demonstration of British power and commitment to our global standing. With two aircraft carriers we will have one available at all times, providing a world-class carrier strike capability. They offer a prodigious promise to future generations of our determination to continue fronting up to aggression for years to come.”

Captain Ian Groom also told media ahead of the naming ceremony that HMS Prince of Wales will need to be delivered during 2019 to allow flight trails to continue whilst Queen Elizabeth is undergoing inspection in dry dock.

Quoted in Janes, he said:

People are being tight lipped about why PoW is three thousand tons heavier than his sister (or mother)? Does anyone know what ‘Ocean’ functions require the extra tonnage? I assume PoW will perform additional duties over and above QE.

Gonna be lean on planes given today’s news

Would be nice to see an article on press speculation regarding defence cuts.

Given the success of the tidespring project and the inability of UK shipbuilding to put in a competitive quote that is unlikely.

Do you ever get tired of writing the same copy paste comment in every article? You really are pathetic.