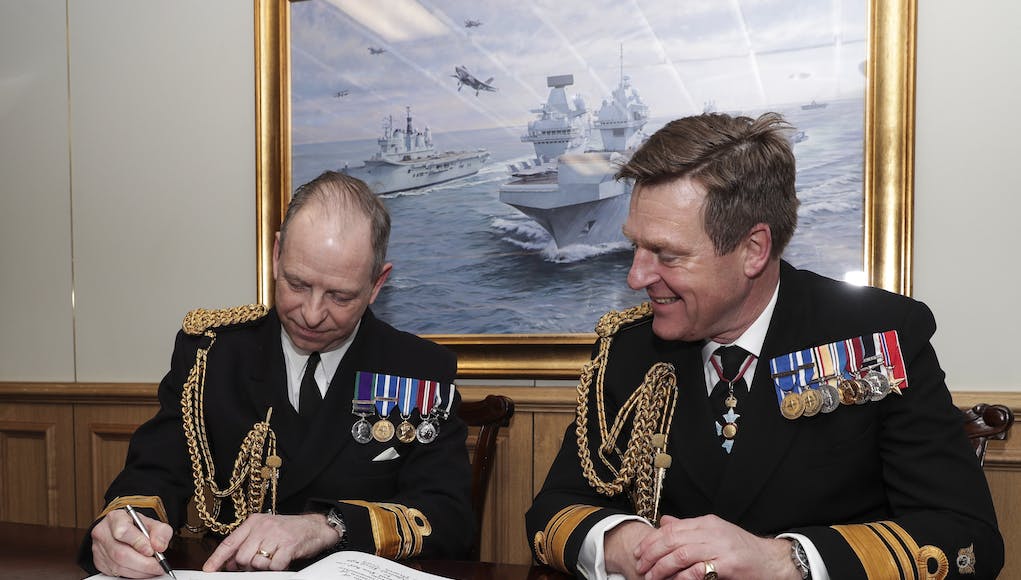 “It is a great honour to take command of the fleet on board HMS Queen Elizabeth, having been privileged enough to lead her through her first sea and flight trials.

This aircraft carrier is just one part of a growing fleet that shows our determination to keep Britain safe in an ever more complex and uncertain world. Our sailors and Royal Marines are deployed on operations in all corners of the globe.”

VAdm Key, who had been in the role of Fleet Commander for three years, bid farewell to staff at Navy Command Headquarters:

“When I reflect on what we have achieved in three years it has been a phenomenal journey. I have had the joy and privilege of commanding the five arms of the Naval Service, supported by the civilians who glue us all together behind the scenes. We have an awful lot to be proud of, with ships, submarines and people deployed around the world on operations.”

“This aircraft carrier is just one part of a growing fleet that shows our determination to keep Britain safe in an ever more complex and uncertain world.”

They must read off the same script as the varied MoD spokesmen and spokeswomen, and minsters who rattle on about uncertain worlds.

Apart from tonnage which part of the fleet is growing?

Technically you could argue the OPV fleet is growing from its current numbers.

Of course, historically it was a little higher but shhhhh, I’m putting a politicians spin on my answer.

Ah, no you’re right actually Lusty. Rejoice! Pity they cost an arm and a leg though.

“Apart from tonnage which part of the fleet is growing?”

We have a growing fleet of decommissioned Subs. not sure if that helps !

the amount of captains without ships

I’m an artist myself, the waves are well done.

I’d like to think that the two other carriers you can just make out in the background are of the WW2 breed.

Good eyes on the Swordfish though!

Could well be, or the old Ark Royal of famous television programme fame.

It’s a shame we never had the pleasure of seeing Lusty or Ark Royal (of the Invincible class) and QE at sea together.

A swordfish could have taken off from the deck of the Invincible without the ramp or vectored thrust! It also possessed a very potent anti-shipping weapon …if it hit! Certainly curtains for a modern naval vessel!

Gunner, Are you referring to the Picture taken from above of HMS Queen Elizabeth and HMS Illustrious ? If so, It was taken whilst both ships were in Dry Dock In Rosyth.

I’ll get me Coat.

If the F35 coming off the ramp in the picture got to that height and that attitude it either has a very gutsy pilot or a lot of artistic licence. I also like the bit about the growing fleet, I wish I could believe it.
Good analysis of the new European Carrier on the Defense News website, apparently a lot of German politicians are saying variations on WTF. And this from the probable next Chancellor of Germany.

Nick C, It’s not unknown for a Freak Wave to hit whilst Launching. This would sometimes cause a natural Boost not dissimilar to a angry Bucking Mule’s hind legs. The Higher the Sea State, the Bigger the Boost. Oh and, Visa Versa.

But, The Painting does depict a calm Sea. So I’m guessing It’s “Artist Licence”.

Yup, “Tossing them off” so to speak.

Only 21 ships (Carriers, Frigates and Destroyers) of our ‘growing fleet’ are guaranteed to be built in the UK. The rest could be built overseas under the wonderful national shipbuilding strategy. See the Govt reply to the petitions, a typical standard script from MOD:
https://petition.parliament.uk/petitions/235377

I need a promotion structure like this at my workplace!

Guess I shouldn’t have left the mob…
Don’t get me wrong, he’s probably a first rate officer, but…

Kyd sure shot up a few stairs quick, they have no aircraft, scrambling for crew, there are more admirals than ships right now……..the RN is no way what it used to be, such a shame to see.

Type 26 delay could mean more work for the Clyde