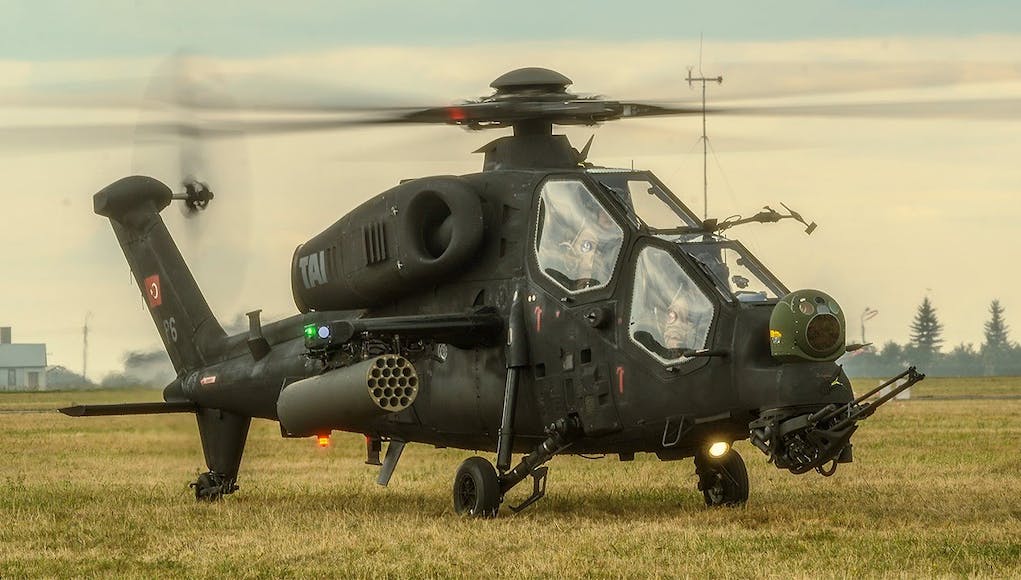 “We have a number of joint projects for developing promising aircraft and rotorcraft platforms, components for the armor and the after-sale maintenance of the armaments supplied,” the press office quoted Rosoboronexport CEO Alexander Mikheyev as saying by ITARTASS.

According to Russian media, Turkey has shown interest in the Russian combat modules, air defence systems and anti-tank weapons.

“At present, we are discussing with the Turkish partners the implementation of some most important projects in the sphere of military and technical cooperation and in the civilian industry. We are undoubtedly ready for various formats of technological cooperation, including in such science-intensive spheres as the aerospace industry, helicopter-building and the energy sector,” the Rosoboronexport press office quoted Rostec CEO Sergei Chemezov as saying.

In addition, last year BAE Systems and Turkish Aerospace Industries signed an agreement to collaborate on the first development phase of an indigenous fifth-generation fighter jet for the Turkish Air Force.

The planned aircraft, the ‘TFX’ is expected to be a twin-engine, fifth-generation Turkish ‘aerial superiority fighter’. The aircraft is planned to replace F-16 in Turkish service. As far back as December 2015, Turkey had indicated that it intended to chose BAE Systems to assist with the design of the fighter.

It is understood that Rolls-Royce have offered Turkey EJ200 engine technology transfer and joint-development of a derivative for the TFX.

Given the way Turkey seems to be heading towards Russia should Rolls Royce still be offering engine technology transfer? Remember the way the USSR reverse engineered early generation jet engines to equip the MiG 15?

I totally agree. One of the major issues with the Sukkoi Su57 (Pak-FA) was its engines. If Turkey are now climbing in bed with Russia and the Su57 is our future opponent, how can the continued involvement of Rolls Royce be allowed. As I’m 100% certain that Russia will give their left arm for any EJ200 performance and material data. What is going on in Turkey, a few years ago they were nearly in conflict with Russia following the shooting down of the Russian aircraft over Turkey/Syria? How and why have the two countries down a 180 to be fawning… Read more »

The Bosperus straight is basically the outlet for all raw materials coming out of the Volga.

Along with Sevastopol and eastern crimea its of essential strategic value.

The very reason Churchill hated Stalin, was in fear of Sovjets contesting the eastern Mediterranean and blocking Suez, the doorway to India.

Even with new harbours on north of siberia in climate change future. Turkey will remain the mist important partner to Russia till hell freezes over.

Its a wonder how the Turks stayed neutral.in WWII and became NATO puppets with missiles during the Cuban crisis.

Indeed does one laugh or cry at the realisation that British engine design (was it the Avon) helped the Russians, even the Koreans put aircraft into the air that niether we or the Americans could truly match. Not sure if the EJ200 would be a risk in this regard things have cHanged markedly and I guess it has to be balanced against the ability it would potentially give RR to invest in moving forward the curve of its engines.

The Spey turned up in some odd places as well, like the Xian JH7. But that was about 40 years after it was designed. I’d be very worried about giving Turkey EJ200, esp. if it involved the planned power upgrade they were talking of to push it to 28,000lb wet thrust category. I think the whole BAES tie up should be reconsidered as well, in light of Erdogan’s shift to Russia, but I have a feeling the current UK Govt. would chase the money and not worry about the consequences, just like they have with decisions on Hinkley Point, ARM,… Read more »

The UK Gov is run by Quislings.

No, the EJ200 is still very relevant. The engines used in the Su57, the AL-41F1 is an uprated version of the ones used in the Su35. They have a very low time between maintenance. This is because even though the engine is very powerful, its hot end suffers severely from cracking. Which is due to the inferior materials used in the turbine housing and blades. The production engine is said to be an evolution of the AL-41F1, so will probably have the same problems unless they’ve solved the material issue. The EJ200 has one of the highest mean times between… Read more »

I would imagine that this will put the tin hat on their aquisition of the F35 following the S400 missile deal.

IT seems shooting down Russian aircraft can have unexpected benefits. Is this part of the strong promised retaliation I wonder. Deeply unpredictable this complex world of military and political mischievous interactions.

Looks familiar that aircraft… I wish Britain had a decent Attack helicopter builder!. It also would have been great if that British tandem rotor “Bristol belvedere” could have been supported more and then we wouldn’t need to buy the chinook… The Bristol Belvedere was the only british production tandem rotor and I’m sure they would have only got better and bigger engines and payload ect… Shame.

In an industry that’s mainly run with a political mindset, the T129 makes a very interesting case study, that feeds directly back to a proposed pan European Attack Helicopter, that eventually became Tigre. The British and Italians suggested the A129 as a starting point .. The Germans and French ‘insisted’ on a clean sheet design. The British sensibly split and went for the AH64 and the Italians stuck with the A129. The Tigre has hardly been a successful design, with limited orders and a troubled and very slow development… Thank God we dodged that bullet! The capable collaboration T129, shows… Read more »

From the FT last month: Please use the sharing tools found via the share button at the top or side of articles. Copying articles to share with others is a breach of FT.com T&Cs and Copyright Policy. Email [email protected] to buy additional rights. Subscribers may share up to 10 or 20 articles per month using the gift article service. More information can be found at https://www.ft.com/tour. https://www.ft.com/content/164c5ee0-3d1d-11e9-8c2f-30761f19a974 CGI of the Turkish fighter jet TF-X being developed Share on Twitter (opens new window) Share on Facebook (opens new window) Share on LinkedIn (opens new window) Save Save to myFT Laura Pitel… Read more »

From the FT last month: Laura Pitel in Ankara and Sylvia Pfeifer in London MARCH 4, 2019 Print this page107 Rolls-Royce has scaled back efforts to join a Turkish programme to build a new fighter jet, striking a blow to UK ambitions to put the British aerospace industry at the heart of the project. The aero-engine group has been working with the Turkish industrial group Kale to bid for the contract to develop the engine on the TF-X jet, an ambitious scheme to create Turkey’s first indigenous combat aircraft. Senior UK officials, including the prime minister, Theresa May, had lobbied… Read more »

I posted this last week. The quetions raised by Turkey getting into bed with Russia and the manufacture and operation of the F35 are re-enforced by this story. “Turkey buying Russia’s S-400’s is going to screw up not just the manufacture but also planned operation of the F-35. The UK is the only Tier 1 partner contributing at least $2.5bn. Italy a Tier 2 partner has paid in $1bn. While Turkey a Tier 3 has paid in $195bn. In the operational phase, the UK got the Avionics maintenance at Sealand. Italy, a Tier 2 partner, after threatening withdrawal got the… Read more »

About 15 years ago I was in Turkey trying to set up their helicopter manufacturing. They were well behind that capability and an earthquake put paid to an further work. I doubt if anything will come of this. Just politics.

Turkey is already building its own heli engine and is using it in the T129 Attack heli. Turkey has jumped ahead in many areas. They are already working on another attack heli, and are way ahead of many countries in drone tech. Turkey recently test fired their home made ballistic missile.

I was thinking more about the avionics (my area of expertise). Over 60% of the cost of a helicopter is in the avionics and it’s in this area they were particularly weak.