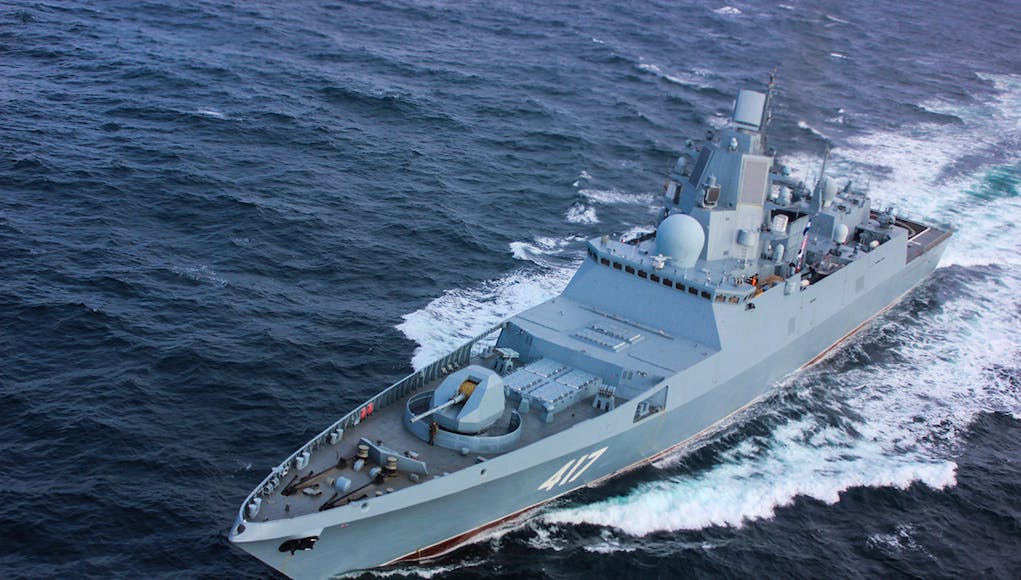 More Project 22350 frigates are to be built at the Severnaya Shipyard in St. Petersburg, according to local media.

Speaking at the floating out ceremony for the Project 20380 corvette Retivy at Severnaya Shipyard March 12, Russian Deputy Defense Minister Alexei Krivoruchko was reported as saying:

“I want to assure you, the staff, that the book of orders formed and signed with enterprises of the United Shipbuilding Corporation, in particular, with the Severnaya Shipyard, will enable it to utilize its capacities at least in the next ten years. In the near future, we also expect and will lay the keels of additional frigates.”

It was also reported that the deputy defense minister did not disclose how many more frigates are to be laid down at the shipyard, but specified that he was referring to Project 22350.

Currently, the Russian Navy has one Project 22350 frigate in service, the Admiral Gorshkov. Another frigate, Admiral Kasatonov, is to be commissioned later this year.

The Admiral Gorshkov class is the successor to the Neustrashimyy and Krivak-class frigates. Unlike their Soviet-era predecessors, the new ships are designed for multiple roles and are to be capable of carrying out long-range strikes, anti-submarine warfare and escort missions.

Sounds like just the job for the RN! Perhaps,we had better cancel the type 31 and place orders for 6 of these far more capable vessels instead!!

And what would 6 cost? 4 or 5bn? That said, I do want us to look at uparming T45 Destroyers, T31 Frigates and even T26 as soon as the funds are available. Funds are our problem. However if you look at the history of warships; and certainly RN ships; we have arguably rarely had the best equipped ships (on paper). Right back to Nelsons time our Battleship 74’s were out gunned by the French 80’s which also had 36lb guns on the main deck vs our 32lb guns. Likewise our Frigates were usually outclassed. The Russians here have produced a… Read more »

Will
Reply to  Paul42

does it come with its own tug for when it breaks down?

Russia won’t be building any

Darn these Russians fully equipping their new frigates with all the right gear. Can’t they learn how to hazard their ships like we do in the UK? Underequipping with 2nd rate gear is the HMG/MOD cool fashion, not a whacking great 130mm when you can ship a piddly 57mm & keep your finger crossed no one ever calls your bluff. Goes for T31s tiny SAM magazine, antiquated ASMs too. We persist with this dreadful fantasy that we can keep all the half-equipped ships out of harms way & any enemy will do the decent thing & leave them alone. No!!!… Read more »

Agree absolutely Frank 62, it is depressing how underarmed so many of our warships are. If we have to go into a peer conflict, rather than hiding behind the USN, the results could be rather disastrous.

They are looking quite powerful for their size!