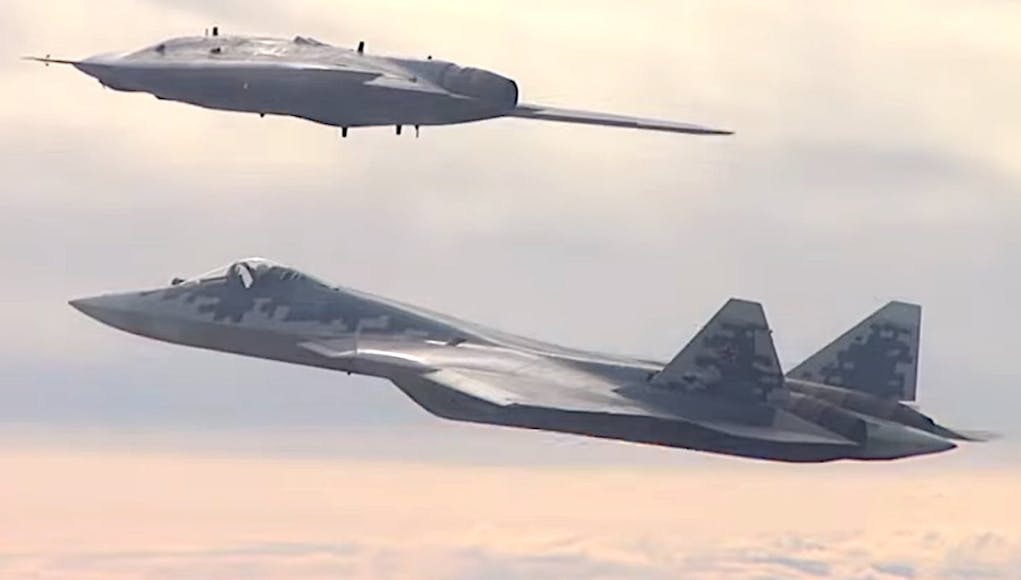 Russian media are reporting that the Okhotnik drone will perform a series of weapon firings during trials.

The Sukhoi S-70 Okhotnik performed its first test flight earlier this year according to state media, and has subsequently engaged in testing to confirm its capabilities. Once operational, the drone is slated to work in tandem with fighter jets such as the Su-57.

The Okhotnik has been under development since at least 2011, when Sukhoi was selected by the Russian Defence Ministry to lead a programme for a new heavy unmanned reconnaissance and attack drone.

Last month, the Okhotnik made a joint flight alongside an Su-57, wherein the two aircraft practiced coordination “to broaden the fighter’s radar coverage and to provide target acquisition for employing air-launched weapons,” the Russian Defense Ministry said. It is likely the Okhotnik was designed to act as a “loyal wingman” controlled by the Su-57.

Further flight trials are scheduled for the rest of the year.

Russia hopes to put the drone into service in the next five years.

Believe it when see it

Looks suspiciously like the US RQ-170 which of course the US lost one in Iran in 2011.

Which is a major reason no doubt why the USAF keep their latest stuff under wraps for as long as possible. Russia and China will just copy it.

I’m sure the Iranians would have given the Russians full access to their prize at the time and the Russians are pretty good at reverse engineering, a gift horse really.

Judging by thier recent efforts with autonomous robots it probably has a prone midget at the controls. Indeed im sure I can see his little thin arms sticking out the front of one of those pics.

The Chinese “Sharp Sword” is another UAV which looks suspiciously like the US Stingray drone. All the flying wing drones pay lip service to the original Horten 9 design, so I guess its no surprise they all look similar.

There’s no such thing as keeping under wraps these days. Everything is stored somewhere and everything can be hacked either for political will or personal gain as China proved much to the chagrin of the US, Russia and France.

Hmm, not sure. Having researched the US Black Budget for many years there are secrets that are indeed kept. Many things that have been tested at Groom don’t see the light of day, and I would assume that applies to both the public and foreign intelligence services.

A Flying Triangle was seen in 1989 over the North Sea, being refuelled by a KC135 and flanked by 2 F111. That is just one example.

Oh Taranis UAV, where are you…^^

Just goes to show how inefficient the MOD is. We had Taranis in a similar position 2-4 years ago and it seems to have died a death, when the UK needs a relatively cheap force multiplier 1 f35 controlling 2-4 Taranis is a game changer. As does making them into refuelling vehicles for the carriers. All of a sudden we have deep strike capability with the F35 managing the jamming and battle space from a stand off position. We really do need to be far more innovative than we are, as ultimately we haven’t got the budget or people of… Read more »

An operational version of Taranis was never going to be a cheap option and there is not enough money to do it and a future fighter as well, hence Lanca which is more sensible in that its cheap and so we can afford to loose some.

Not sure I agree with you there, Taranis is a way for the UK to create a deep strike capability that is now lost with the removal of tornado, F35 is a regeneration of the carrier wing and at £10-20m each is far cheaper than the alternatives. I also believe if we had pursued Taranis, we could be selling it to other F35 partners so they could also benefit. Tempest is at least 10 years away and Typhoons replacement in the long run. You may be right about Lanca, but that is the future, we have Taranis now and I… Read more »

I doubt a Taranis production version would cost that little especially as numbers would be low.A demonstrator is a long way from a production design ,it would take a lot of money and resource away from Tempest and that is by far more important.Typhoon has taken over deep strike and combined with Lanca will cover that role well enough.Its interesting that the US has not produced a fleet of UCAV’s that we know of considering how far ahead of everybody they were.

Your points all make sense, but also show how pre-programmed we are on these things now. The UK has a really good aeronautics industry and we should be looking for niches where we can become world leader. Your point about the US is really valid, but that actually provided a window of opportunity (since gone I believe) for us to fill, much in the same way as the Norwegians have with the JSM/NSM. It seems to me the UK could and should have funded 276 Taranis (2 per F35) and made a statement about the product and its cost base… Read more »

I agree the opportunity was lost but there’s little political will to do advanced projects alone so Tempest with Italy is a good way forward.I like the Lanca approach as it offers a lot of Taranis capability at an affordable cost and its interesting that both the U.S. and France seem to be going this way to.

i would hope taranis trials will involve possible weapon fits, hellfire and the like, its ability to operate from the carriers in the future may be an area of interest i believed lockheed missed a trick by not developing a folding wing f 35b which could greatly increase the fighter capacity for queen elizabeth.

Hopefully this goes better than the nuclear powered missile test.