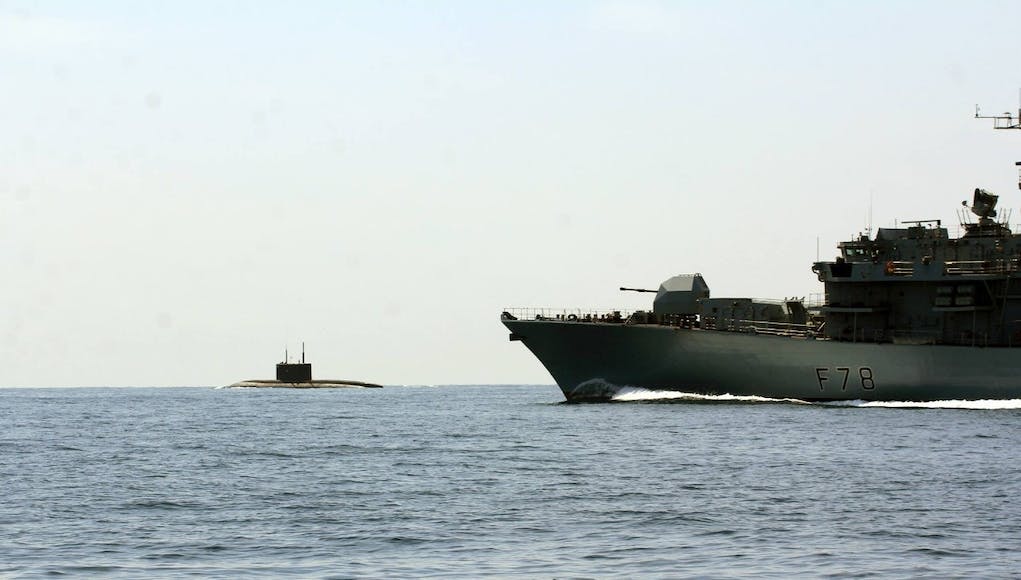 Type 23 Frigate HMS Kent has been sent to watch the Stary Oskol, a Russian submarine of the Kilo class which left her home port of Severmorsk, Murmansk and reached our coast on Sunday.

The Kilo class is the NATO reporting name for a naval diesel-electric submarine that is made in Russia. The original version of the vessels were designated Project 877 Paltus in the Soviet Union.

These attack submarines are mainly intended for anti-shipping and anti-submarine operations in relatively shallow waters.

“Locating this submarine was a combined effort with Nato allies and shadowing such units is routine activity for the Royal Navy.

We continue to escort the submarine as it conducts its passage, providing a visible presence.”

The Type 23 frigate were originally designed for anti-submarine warfare however have proven their versatility in warfighting, peace-keeping and maritime security operations around the globe. Thirteen Type 23 frigates remain in service with the Royal Navy, with three vessels having been sold to Chile and handed over to the Chilean Navy.

Sailors aboard HMS Kent have reportedly been tracking the sub over the last few days and it is believed she is currently off Dover.

“This shows that the Navy is maintaining a vigilant watch in international and territorial waters to keep Britain safe and protect us from potential threats.”

Who would I need to give credit for the pic? Crown copyright?

See navy starting to get its act together, last year Russia parked an aircraft carrier off Scotland and it took 24hrs to get a ship up there!

Aircraft were on the scene instantly, the sending of surface vessels like this is little more than a photo op.

UK Defence Journal true but with an under equipped navy it does make the challenges of protecting our waters a lot more difficult and in some cases dangerous.

Adrian Bennett if he’s going through the channel he would have to surface as to shallow.

Apparently they knew he was there before he hit the Channel.
So apparently our navy is doing ok even without althe maritime recce craft it needs

Ryan Andrew Black NATO told us he was there as they were previously tracking not difficult really as was surfaced with a tug. Also the ship was on hand as was coming back from Jutland commemorations so we were lucky we had a ship in area. Otherwise we may of had to ask the Russian sub to Hold up for a while we go an escort up there!

Russia have always tested northern costal defences.. Air and sea!
(Mainly as it’s the fastest coast line to arrive at)
It’s nothing new to northerners.
It’s only the last few years became more co manly known due to social media etc etc.
it’s became that often the Russian and interceptor RAF pilots wave at each other.

I don’t know much about the ability of each vessel…but if the Russian sub is that close, could do some
Damage to the uk surely before that frigate could react?

I think if Putin wanted to attack the UK, he’d use boats in the deep ocean rather than one in the channel.

It is not clear from the article how this sub was spotted, we just know that once spotted the frigate tracked it. I assume it was spotted by an allied maritime aircraft patrol.

Ultimately frigates aren’t much use for protecting the coast, as they take too long to get to a position unless we know well in advance where they need to be Aircraft are much for effective, leaving the frigates for escort duty or protecting fixed points like harbors.

Not only a routine activity, but also probably common sense, submarines are low in the water so aren’t that visible and could possibly collide with shipping if travelling through the channel, if we’re shadowing them then we’re nearby to lend assistance if an accident occurs.

It was on the surface being supported by a naval tugboat navigating shipping channels. Hardly a tactical intercept

See!, we don’t need Nimrod after all Trev! ?

Just goes to show how ballsy the Russians are if they can’t be bothered to submerge ?

Apparently, the crafty buggers have been sneaking them in, in bunches of bananas…..

Trevor Cook the boat is probably broken and can’t submerge.

We still rule the waves

Should have sunk it .