Saab delivered the first GlobalEye ‘Swing Role Surveillance System’ aircraft to the United Arab Emirates on the 29th of April 2020.

In November 2019 the country also announced its intention to complete a contract amendment for the purchase of an additional two systems.

“The delivery of the first GlobalEye is a major milestone for Saab, but also an important step in the history of airborne early warning and control.

We have set a new standard for the market and I am proud to say that we have delivered the most advanced airborne surveillance solution in the world to the United Arab Emirates”, says Micael Johansson, President and CEO of Saab.

Nice piece of kit. SAAB produces some great stuff for such a small country. They are always on the leading edge.

Correct. This was a very smart move by Saab!

“Finland’s HX program is ostensibly a multi-role fighter competition, but Saab has taken the step of adding the force-multiplying GlobalEye airborne early warning (AEW) and intelligence/surveillance/reconnaissance (ISR) platform to its offer of the Gripen E/F so that it can generate a wider set of capabilities. By leveraging the GlobalEye’s state-of-the-art AEW/ISR suite, the overall combat effectiveness of the Gripen force can be considerably enhanced, and its use in the AEW role can download the burden on the fighter force by negating the need for combat air patrols in certain scenarios.” 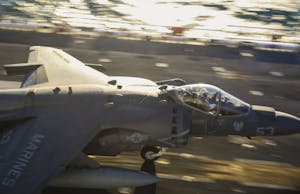 May 17, 2021
Harrier jets launched from the USS Iwo Jima acted as enemy strike aircraft for an exercise.