Home DSEI2021 Saab ‘Next Generation Combat Boat’ on the Thames 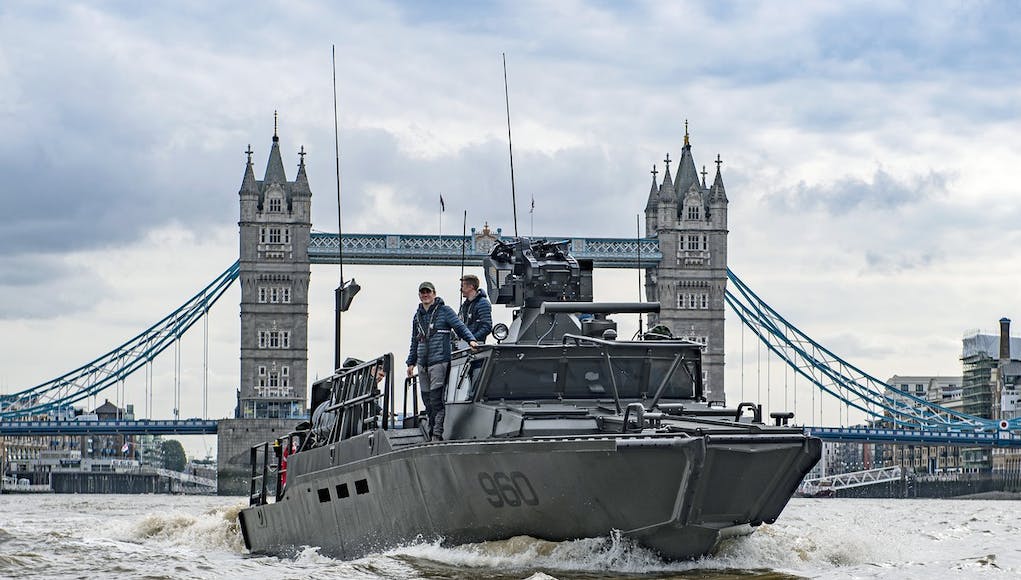 DSEI 2021 – Travelling for the first time outside of its native Sweden, Saab’s Combat Boat 90 NG (CB90) has toured the Thames visiting London landmarks.

The combat boat will be shown from 14-17 September at the DSEI exhibition taking place at ExCeL London.

“Building on the previous generation of more than 250 boats operating worldwide, the CB90 Next Generation (CB90 NG) features new capabilities. Designed to swiftly transport marines and other forces, CB90 NG is renowned for the ease by which troops can rapidly get on-shore and depart again, be it a beach or an awkward, elevated rocky shore. Depending on the mission, CB90 NG can take on different roles such as to search for threats, share intelligence, rapidly deploy troops and attack the enemy.

CB90 NG includes a new combat management system and sensors for surveillance, ballistic protection, as well as further improved stealth, manoeuvrability and speed. By providing amphibious forces with multi-mission capabilities, CB90 NG is an even more potent means by which to project force from the sea.”

“It’s great to have CB90 NG here in London on its first visit outside of Sweden.  We are proud of our combat boat and the capability it offers to our partners, and feel privileged to show it off to Londoners on the Thames today,” said Magnus Lewis-Olsson, Chairman of Saab UK.

Saab say that the CB90 NG has potential applications with specialist military units such as the Royal Marines Future Commando Force and the Littoral Strike Groups. The example of CB90 NG seen on the Thames and shown at DSEI this week was recently delivered to the Swedish Navy, with the designation Docksta CB 90HSM.

It is representative of how CB90 Next Generation is customised to meet a customer’s requirement, and DSEI gives armed forces the chance to see and learn more about this adaptability in person.

“The exceptionally fast and agile combat boat has a top speed well beyond 40 knots and can carry up to 21 amphibious troops with full equipment.  Additionally it can be armed with large calibre machine guns, a MK19 grenade launcher, naval mines and depth charges, as well as Saab’s own Trackfire (a remote weapons station that enable weapons to fire with superb accuracy whilst the boat is on the move).”

CB90 Next Generation will put on displays twice-daily as part of DSEI’s waterborne demonstrations outside the main hall. Saab is welcoming visitors to DSEI to come along to where the craft will be docked on the Royal Docks to see CB90 NG for themselves.

Do like these vessels. Always wondered if there would be any utility in combining a couple of these with their depth charge capability and some half descent side scan sonar set up for use in tight sea loch environments around faslane as loyal wingman to whatever T23/T26 was operating.

I know…. ‘Merlin’…..but would these augment and provide some added loitering / endurance qualities with ability to re position quickly supporting Merlin and FF?

I have worked on the USN Command Boat (CB 90 based) which they had in service for a few years prior to moving onto MKVI boats (which they are now also disposing of.) CB 90s are a major pain to overhaul and conduct maintenance on and the spares where ruinously expensive. The manufacturer has had to squeeze a quart into a pint pot and this means that lots of systems cannot can be easily dismantled without dismantling a lot of other things first to get to them. They are way more complex than a LCVP and having seen first hand… Read more »

You’ve mentioned the ORC before too. Having read up on its specs there does not seem to be much the CB90 has that the ORC can not do already, range similar, dismounts wise ORC has less but is that such an issue? I guess CB90NG has gucci ISTAR kit and new RWS.

RM already have 39 ORC in service.

And RM already trialled CB90 years back and reportedly rejected it.

Seems to me another case of buying gold plated if RM got this when an ORC is “good enough” for rapid insertion / riverine ops.

The current LCVP is not just matelot proof but achieves the even higher accolade of being pretty much Royal proof. As you said you can go for the gold plated standard but it will need intensive servicing, parts and looking after . Or go for an Orc or LCVP which are simple and reliable. CB 90s in UK use are going to be ship based assets on Albion, Bulwark and Bays. You need to be able to maintain them and keep them going at sea, in austere conditions with no shore side support. Sweden doesn’t have that issue as they… Read more »

Other thing that occurs to me is that a Bay can only carry 2 LCVP in well dock I believe? ( I Know LPD carry 4 and 4 LCU )

And a Bay will be with the LRG(S)

So for a bigger insertion and to spread your assets they will need more boats. I guess dozens of ORC can fit in a Bays dock?

Could they be held on deck and put over the side ala Mexefloat too?

Surely the bays crane is big enough and they can hold multiple on the top deck.

I LCU will fit in a Bay dock which means 2 or 3 VPs could fit. Orcs on trailers could launch over the beach into the Dock. They would take up one vehicle lane on the deck as they have done on LPDs .

The cranes on the Upper deck of a Bay can launch Orcs into the water… But I have heard that the Hangar mod will remove one of the cranes.

200 mile range with some fuel reserves seems pretty good for ORC is it?. But must be dam cold if in the Arctic with it being open to the elements.

Probably. I think it is more likely LRG(S) will be using them though.

Interesting to find out.

AS always, an interesting insight!
So do you think that ORCs are sufficient, or could they do with a replacement/overhaul? An RWS or better sensor/comms gear or something? In all honesty, I don’t know how they’re fitted out at the moment, so they could have plenty.

Not to denigrate the GPMG too much, but I think they could be improved upon with minimal expenditure, surely? I suppose there is the question about whether that’s required. But if the ORCs are going to be the primary waterborne transport method for the these RM teams from the LRGs, then I think they could do with being up armed. At the moment, even the smaller IRGC boats in the Strait of Hormuz are going to be more heavily armed. I know that actually shooting at each other is unlikely to happen. But having the greater threat of firepower would… Read more »

They are open to the elements but it depends what you want to do with them. For getting from a to b and landing they are fine. MKVI which I have worked on have RWS and they re great on smaller boats. Not sure they would add much to an Orc though. Probably need an up gunned orc with cabin cover. Something that’s still simple to look after, robust. Royal is going to be raiding so quick in, cause chaos and get out. He is not going to be doing his own version of the battle of the river plate… Read more »

Sounds like a relatively simple improvement plan, but I guess there are bigger ticket items that everyone is interested in so unlikely to get done. Haha, I wasn’t thinking River Plate, but more along the lines of aggressive patrolling in the Gulf around Yemen and Iran, the actions they carried out in the marshes of southern Iraq, and even harking back to the river fighting in Vietnam. There are probably applications in the Baltic and Black Seas too, and plenty of others I haven’t thought of. Any of those situations would probably benefit from an automatic grenade launcher at least,… Read more »

These are great looking, can and does the UK still build and design similar craft? Surely we can and could export..

Course we can. We have built advanced SSN and Carriers. We can build anything given the will.

Likes of Sweden prioritise these smaller vessels as their geographical position in the Baltic sea with its many islands demand it.

The UK has the blue water RN with global outlook, so smaller vessels while having their uses are not top of the list.

Yes, the ORC is British.