Mine warfare experts from HMS Shoreham have returned from the Gulf and are to re-train to use new automated minehunters and associated equipment.

The Royal Navy say here that the team from 1st Mine Countermeasures Squadron Crew 7 have completed numerous tours of duty in the Middle East either in HMS Shoreham or one of her Sandown-class sisters which spend three years at a time operating from Bahrain.

You can read more about the delivery of the new craft below.

“Controlled remotely either from a ship or command station on land, Hebe, Harrier and Hazard can be used to detect and classify mines or ordnance dumped in the sea – at speed, without putting sailors and a multi-million-pound warship in danger.

Under the recent Defence Command Plan, the Royal Navy has decided to gradually move to autonomous mine warfare technology. Instead of returning to take charge of another Sandown-class ship for UK-based operations the mine warfare specialists will get to grips with the new launches.”

“I am excited to be part of the first team to work with the new systems. I am looking forward to taking on the new challenges that it will present to me.”

The Royal Navy say in their news release that using the three new boats, he and other mine warfare experts can coordinate and control the boats or monitor autonomous offboard sensors.

You can read more from the Royal Navy itself here.

Sad these unmanned drones are taking the place, those minehunters were quite useful force mutipliers

Exactly. The RN in recent years has employed surface assets increasingly in multiple roles for which they were not originally intended. Obvious examples are the MCM’s, OPV’s,survey ships and various RFA vessels employed in relief work, low key policing,rescue etc.. These manned ships provide two things-human eyes, ears and minds ‘in situ’ and minor self defence/offence capability up to 30 mm canon status.They will as pointed out have to operate in conjunction with larger surface units or close to shore, but the advent of these unmanned minehunters will lead to the loss of some or all of the existing conventional… Read more »

Its frightening that they’re letting Muppets loose on things with moving parts. ﻿ 😂 ﻿

Like it or loath it it’s the future. I wonder what they think of their new kit?

Boaty McMineface? The eyes have it!

MCM, another area where the RN outclesses most others. Lets hope this continues.

I don’t know a lot about this kit but if operating unmanned in the straits of hormoz. What would stop bad actors disabling and or towing them away. The answer to me is not obvious.

Need to put lasers on top of them for protection – mine hunters with friking lasers on them 🙂 aka dr evil.

joking aside GPM on each one?

They are designed to operate either close to a shore station or with a mothership – could be a Type 26 or 31/32 frigate, or a Bay or even a contracted support vessel, which will be nearby. The main Anglo-French system on order from Thales (not this one from Atlas, which is for route proving in the Clyde) is due to be deployed in the Gulf (two systems I think), probably from a Bay, and also has a rotary UAV as part of the system to provide surface surveillance and act as a datalink between mothership/shore station and autonomous systems.… Read more »

Good info as trying to get my head round this autonomous lark.

Didn’t realise these are for Faslane only.

As for autonomous, there are windows and that looks like a persons head in view??! ﻿ 😎 ﻿

Yes they can have a driver too!

Hope that it doesn’t come down too drawing a short straw when a coxswain is required , as the diving branch is trained for EOD and their pay equates to those types of jobs ,then just allow CDs to perform the roll of coxswain .There could be gongs awarded for such tasks

I believe the Clyde route-proving system has been created from two experimental Atlas-Electronik ARCIMS autonomous MCM vessels procured under Project Wilton with an added Project Vahana SEA dive support workboat as a command vessel. Three sets of the Anglo-French developed Thales/Harris L3 autonomous MCM systems have also been procured, with deliveries due to begin at the end of 2022. These are more fancy. Three UUVs are being procured to work with these systems. More systems are likely to follow. 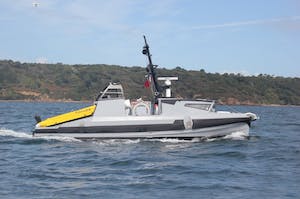 Thanks. Is it 3 MCM boats plus Diver boat per system? I guess we will end up with half a dozen systems at least?

The Thales systems are about £60million each, the experimental ARCIMS influence sweep system was £13million although I think it has been upgraded with a towed sonar, so quite reasonable. UUVs and UAS are extra.

One of the benefits of autonomous as opposed to manned is that there is no loss of life if a hunter is hit by a mine. But surely these boats (They don’t look big) are supported by a larger ship. So anything that attacks them can be lrotected(?).

I’m just curious here but, when was the last time the RN ‘hunted’ a live mine? The immediate area would seem to be the gulf.

The other side of the coin is, what intelligence do we have about enemy players preparing to be able to lay minefields.

I would guess lots that we will never be privy to!

Hi does anyone know how many sailors this will free up for sea service in rest of fleet ?

In total numbers, not very many. But I imagine the MEs released will be particularly valuable in addressing skills shortages elsewhere.

How this will work in bad weather?

They will operate the same as MCMVs do in bad weather… Which is they don’t. Hunting is weather dependent. You need to maintain an exact(down to less than 1 m) positioning in your sweep/hunting lane and you need good sonar conditions. If you are using a VDS or a towed sonar the sea state is going to be the issue. Being on a small MCM or Patrol Craft when it’s lumpy is in my own experience, god awful. That’s why I spent most of my career on things far far bigger. Even now when I do sea trial on small… Read more »

Morning Gunbuster. I had an acquaintance who claimed to have been on a MCM in the North Sea in bad weather and he echoed your sentiments entirely! I get sea sick in even relatively mild chop going out of the Durban Bay! Thanks for info as above.

Yup, only time I vommed was on small ships.

I take it when these are deployed they have to be transported to the area on the deck of the mothership , then lifted into the water task completed then lifted out again ,that if the task is away from port. They would not be able to travel a long distance to a search area.

That is my bugbear. We need motherships and they are in short supply.

As are Atlas aircraft.

Yonks ago on here i suggested a blue water “mother ship” capable of transporting fast patrol boat-type assets to an area of concern and was basically laughed at by others. The same ship (if quiet) could be used to transport and operate these drone MCM boats.

Another great opportunity for British shipbuilders….

The ideal ship would be a ship of similiar design to the Superyacht support ships .
They have all the accommodation and bridge to the front of the boat and have a large flat deck to the stern with onboard cranes.

Yep, or my thoughts were for a tri-hull design Mother ship with the boats mounted and deployed from the outer hulls. An added benefit if carrying fast patrol boats, their defences could add to that of the mother ship’s.

Failing all that the cheap and cheerful approach would be just to use commercially available vessels as ‘GlassHalfFull’ has suggested further down the thread, but they would be noisey for anti-submarine environments.

During the 80ts the Navy used STUFT one example was the Stenna Seaspread down at Mare Harbour the Falklands as a front line support vessel in 87 she was relieved by RFA Dilliegence one week after hand over ,the Stenna was back and the Dill was retasked to Jebal Ali UAE as mother ship for MCM operations during the closing stages of the Iran/IRAQ WAR

But motherships don’t need to be anything more than a commercial vessel with appropriate launch and recovery capabilities, and there isn’t a shortage of them. For example operating off the UK coast and around the naval bases won’t require anything more than a commercial platform and in some cases may even operate from a land base. It only becomes a potential issue if we need a RN vessel and then it probably requires more than the current defence systems carried on Hunts, Sandowns, or the new Dutch/Belgian vessels. Its not clear what your concern is with the number of air… Read more »

Morning. My train of thought was back when someone told me here that an advantage of these could be rapid deployment by air, in contrast to a conventional MCMV vessel spending weeks to get out to theatre. So assumed it would be commonplace. With the Hercs going, that is another task the 22 Atlas and 8 C17 are lumbered with as they will now also be doing the SF mission which required 14 AC to generate however many are available daily. Fair comment on the mothers for UK waters. I wonder if they will be commissioned vessels on overseas tasks… Read more »

If it were commonplace then I can see the basis for your concern but its more likely to be either used in extremis, or at the beginning and end of a deployment. We might for example fly a system to Singapore (as practice in case of mines in the Malacca Straight) and then operate it from a B2 or T31 that is forward deployed. Or the MCM mission might be supported from our future survey ships in similar fashion. Or we might even host the system on allied vessels to leverage RN expertise with less experienced navies. But to answer… Read more »

As always, a comprehensive alternate explanation GHF. Thanks.

Hi Daniele
i read some where the Germans don’t want all the Atlas’s they have ordered…. Could be some nearly new ones available with very low mileage….

Yes, and Pigs might fly if by some miracle the Mod bought any!

I agree the option is there.

I think they will work fine, the investment in the RN has been and will continue to be massive for years to come, new ships, new aircraft etc. Getting rid of some older generation ships is a small price to pay.

The grammar in the headline is a bit odd.