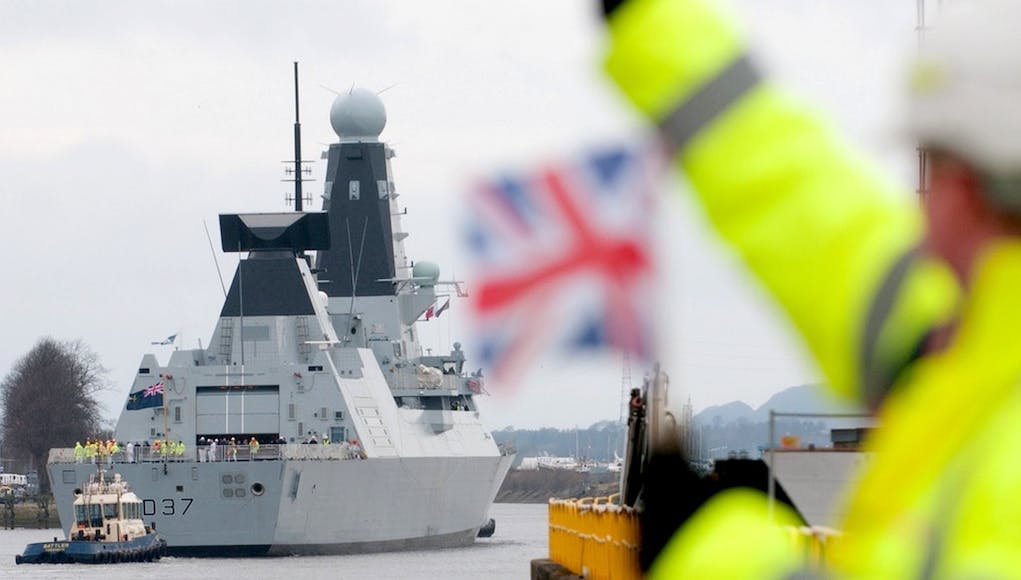 The Ministry of Defence say that Scottish shipyards will benefit from “a renaissance in British shipbuilding through a shipbuilding pipeline”.

“Scotstoun, Rosyth and Govan shipyards will benefit from the shipbuilding pipeline. Babcock in Rosyth will be the principal assembly site for Type 31 frigates. BAE Systems’ Glasgow yards are working on Type 26 ships. Scottish yards will likely benefit from the new Type 32, MROSS and MRSS, and LSDA conversion.”

MROSS is the ‘Multi Role Ocean Surveillance Ship’, MRSS are the ‘Multi Role Support Ships’ designed to to provide the platforms to deliver Littoral Strike, including Maritime Special Operations, in the early 2030s and the Type 32 is a new class of frigate, designed to protect territorial waters, provide persistent presence overseas and support the new Littoral Response Groups.

What is the state of shipbuilding and Scotland and why is it so controversial?

One key issue that has had significant influence over the often torrid debate when it comes to military ship building in Scotland is the reduction of the Type 26 procurement from thirteen to eight vessels. The often passionate arguments from those who support and oppose Scottish independence makes a balanced view of military ship building in Scotland and its future difficult as it can often end up with people shouting their ‘prefered’ facts at each other over social media rather then examining the issues.

With the change from 13 Type 26 Frigates to 8 Type 26 Frigates and 5 Type 31 Frigates (plus some Offshore Patrol vessels), there was the perception in some corners that work had been cut for Scotland, what actually happened?

As a result of Type 26 being reduced to 8 ships, it was announced that five general purpose frigates were to be designed and ordered. These became the the Type 31 Frigates and they were ordered from Babcock at Rosyth. Part of the reason for this change was understood to be that the MoD is hoping to reduce its reliance on BAE and cut the costs of procurement. 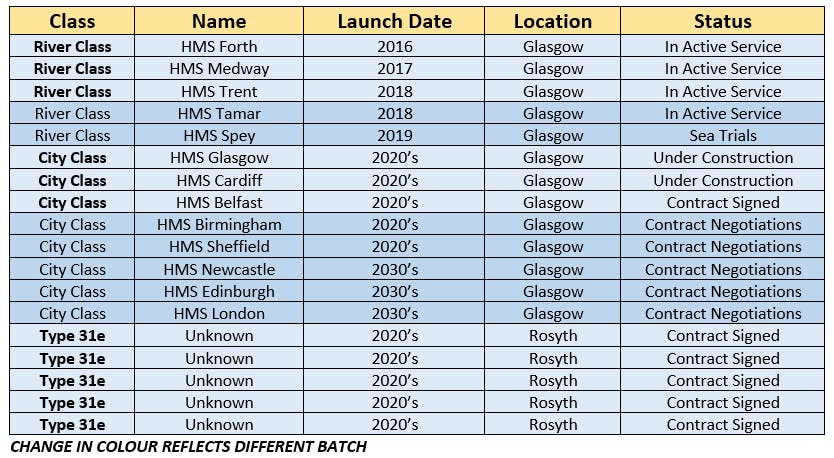 There are plans for 8 Type 26 Frigates and 5 Type 31 frigates to be built in Scotland, 5 River class Offshore Patrol Vessels have been launched. The original plan was for 13 Type 26 Frigates at one yard, years later the plan is now 18 vessels of three types sustaining work at three yards.

Jonathan Chartier, a defence commentator working in Government and local government IT services, explains the issue.

“Traditionally the Royal Navy has purchased ship classes from multiple yards and in distinct batches, this not only spreads programme costs but also allows for changes and improvements to the base design plus rectification work as well as keep shipyards open with a constant steady stream of work. Certainly for famous classes like the Type 12I Leander this batch production was necessary just to keep up with the radical changes seen in electronics and systems over their extensive career.

So whilst the Royal Navy would have a projected number to be built it was not unusual for the number of batches to be reduced or on some occasion increased as needed without comment by the wider general public to satisfy the requirements of the Admiralty and always lurking in the background Treasury. This practice continued through to the Type 23 class which was built by competing yards Marconi Marine (YSL), Scotstoun and Swan Hunter, Wallsend. It is actually possible to tell where an individual Type 23 was built by inspecting its internal pipe fittings. With warship construction consolidated on the Clyde Type 26 was projected to be a build of thirteen vessels again through multiple batches in keeping with common practice, for those familiar with military ship building the thirteen projected was at best a placeholder subject to change.

Certainly it was well known in the period after the 2010 Strategic Defence and Security review it was clear that the equipment programme was again coming under extreme financial pressure again. In that circumstance it was unfortunate with a Scottish Independence referendum in the running David Cameron and the Better Together campaign unwisely turned routine procurement that could be subject to change into a political football by making it a direct promise to Scotland; thirteen Type 26 Frigates would be built on the Clyde alongside a new ‘Frigate Factory’.

The Labour Party exacerbated the situation with a leaflet spelling out that if Scotland remained in the Union it would get 13 Type 26 frigates. The Prime Minister and other Ministers plus representatives of the Better Together Campaign regularly spelled out that a Scotland in the Union would be getting thirteen Type 26.”

So when the referendum was over and won for Better Together, the reality that Thirteen Type 26 was not deliverable within the allocated budget set in.

“A few months after cast iron guarantees for thirteen Type 26, the order was cut to eight as part of the 2015 Strategic Defence and Security with a compensatory order for five General Purpose frigates proffered and some Offshore Patrol vessels ordered in their place. Considering what was promised in very clear terms by the Prime Minister, Better Together and other Parties including Labour it is understandable why Scottish Nationalists have fixated on it as a totemic issue. Put simply thirteen Type 26 was a core promise by Better Together in the Independence campaign that has been, technically, broken.

Of course the more nuanced point to be considered is that Scotland gained five River class Batch II Offshore Patrol Vessels and five Type 31 Frigates (plus a ‘frigate factory’ in Rosyth) as compensation for the loss.”

You can read more on this from Jonathan Chartier by following the link below.

All good news for Nichola….having just got off Scot free!

On the day that women released a draft for independence
What happens if the answer is leave?

Shall we just shutter the rest of the ship building capability in the uk just to keep the stroppy jocks happy?

Yes Andrew, that’s exactly what you should do. Learn your place from your superior Scottish Overlords and be thankful that we are here to keep sending you money, food, electricity and superior politicians like Tony Blair, Gordon Brown and Ramsay MacDonald as well as warships to protect your self for the French or whoever you upset this week. Also be thankful that our Queen occasionally leaves her home in Scotland to visit Buckingham palace to keep your tourism industry alive. No need to thank us just understand your place in the union.

Cheers, Martin. You’re unequivocal support for the Union is most gratifying.

I’ll give you the rest but think you’ll find Scotland gets back roughly £10 billion more than it raises annually to spend on stuff like free university education….

Aye he just got a wee bit confused he was meaning to post on the EDJ even though it only discusses matters up till 1707 … easy mistake to make I suppose ?

Aye spot on a fact only made possible through the healing and restorative supernatural powers of IRN BRU made in SCOTLAND from Girders ??

If the French or Germans had ever discovered the secret of Irn Bru the RN would have been finished off long ago. All great ships are made in Scotland from girders. Luckily the Japanese only copied the whisky.

I guess you’re right that Barrow build boats not ships…but what was the funny big thing I saw floating down the mersey not so long ago?

When was the last time you saw anything floating down the Tyne from the shipyards?

But A & P Tyne have built blocks for carrier, astute and Attenborough.

So we went from building the biggest ships in the world to nothing all in the name of keeping Scotland happy and yet they still whinge like a 2 yr old bairn, it’s a shame they don’t know what was sacrificed to keep them happy

When did you build the largest ships in the world? The Great Michael was twice the size of the Mary Rose, the biggest ships ever built for the RN were Queen Elizabeth Class, Vanguard and Hood all built in Scotland. As pointed out Scotland been building the largest warships in the world since the time of Henry VIII and is still building them. Queen Mary built in Scotland Titanic in Northern Ireland, I’m toiling to think of a biggest ship built in England since the great eastern which was about the first time and last time London tried to build… Read more »

That’s a nice list of little ships you have there, I wonder how they compare in size to the Northumbria, Hibernia, Tyne Pride and World Unicorn? Perhaps do some research before you open your stupid mouth

Martyn you will notice that my list comprises the largest ships in the world at the time. Not to insult your superior Englishness but your list of mid sized VLCC were no where near the largest anything in the world when launched. The Japanese were building ULCC with three times the displacement you ******* donkey.

Moron, they aren’t Very Large Cargo Carriers but a list of Super tankers, once again do your research you cockwomble and yes they were among the biggest ships in the world at the time of manufacture

Mate sort yourself out they are not “super tankers” they are Very Large Crude Carriers the mid size version the the Ultra Large Crude Carriers. Sorry to burst your bubble but if your going to be a **** to people online make sure you know what your talking about. You could have googled VLCC in 10 seconds.

there are other shipyards in the UK. About time some were built in the south

South of where? Waterford? Is Devon south? Is Liverpool South? Is Barrow south ? Belfast is south of me does that count?