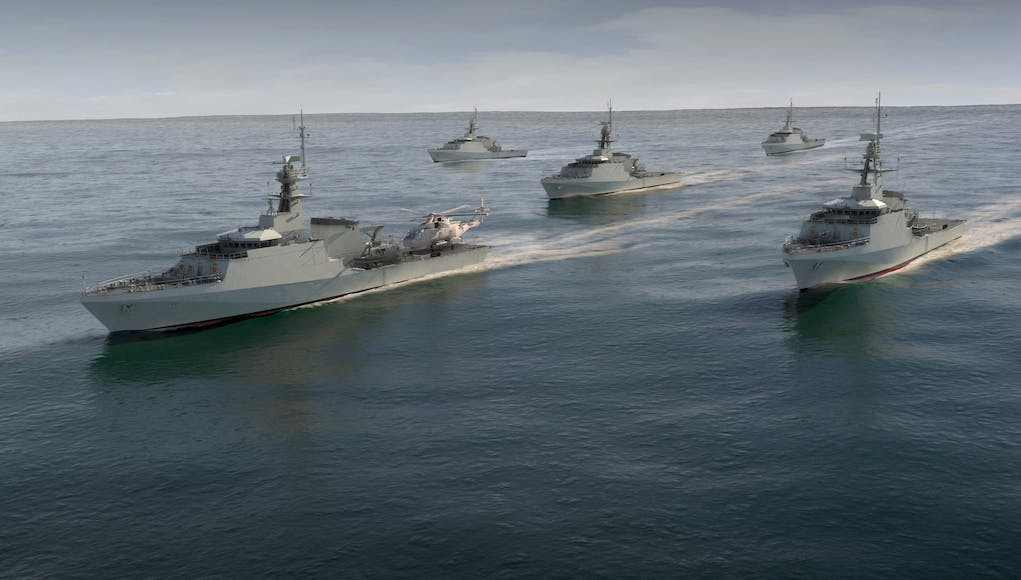 The vessels were earlier described at a Defence Select Committee meeting as ships “the Royal Navy does not want or need”.

It is understood that the Ministry of Defence paid an extra £100 million for new Offshore Patrol vessels in order to satisfy a requirement to pay BAE a minimum of £230 million per year.

A house of Commons Briefing Paper explains the agreement:

“In 2009 the Government signed a 15 year Terms of Business Agreement (TOBA) with BAE Systems and Babcock. The TOBA guaranteed BAE Systems a minimum level of surface ship build and support activity of £230 million a year.

This was judged as the minimum level of work possible to sustain a credible warship-building industry in the UK and thus avoid the delays encountered during the Astute class submarine build caused in part by the loss of skilled staff following the gap between Astute and the Vanguard class submarine build.

If cancelled the MoD would be liable for industry closure costs and compensation to BAE Systems.”

I hate these vessels and all they stand for. They are not even very good OPV’s and cost a fortune. Everyone knows they are neither wanted nor very useful craft and I would like to see us sell these on ASAP or transfer to the border force. The RN needs to get on top of its fleet management (no pun intended) and start building at a regular tempo that is never allowed to drop. We really are at the minimum level here of 2 ships per year and a sub every 2 years of thereabouts. Anything less and we should… Read more »

Simply up arm them and they would be perfectly good vessels in a variety of rolls. They don’t need to be front line .

Defiantly need to be unarmed to make them more useful, for the cost of them they should be

Indeed.
They are probably one of, if not the most expensive OPVs, yet don’t even have a hanger.

Well, I like them. Reasonable spec, good value at the proper price (I’d still be interested to know if the 5 OPVs and perhaps 3 T26 is a payoff for the 2009 TOBA). Range 5,000 nm? Good enough if Ocean Shield is brought back based at Bahrain perhaps with at-sea refuelling to extned patrol, or for similar operations in the MED or off Africa. That could relieve FFs for escort duties.

agree with Howard, still handy vessels to have.. They can carry out anti piracy roles and operations in the North Atlantic / Caribbean area, takes the pressure off the Destroyer and Frigate fleet. The Royal Navy does not need to deploy it’s expensive Destroyers and Frigates to do light deployments when these smaller patrol vessels can do that job !

I agree with Pacman27, Howard and John. They are certainly overpriced, they do need to be up-armed and if this is done properly, they could be competent enough at lesser responsibilities enough to free up the escorts – that John quite rightly stated should not be deployed to menial taskings. As it always does, it comes back to money – or lack of it in the case of the RN. Unfortunately, the current state of play will continue for the foreseeable future….

RN really needs to up its game on drones because that could add a lot of capability. Sadly the last big news I noticed was a step back with funding for extending ScanEagle trials pulled. River B2s have no hanger but do have a decent sized flight deck and ability to stow 2 containers without encroaching on the flight deck (1 either side of the crane, aft of the RIBs) which would give enough space to embark and effectively provide hangarbfacilities for a UAV. There’s also spare crew and command space plus a proper CMS infrastructure. If there’s any vessel… Read more »

All arguments presented are valid and I accept they can have a role. The reason I dislike them so much is that they take away from what we actually need which is escorts. Understand the logic of having a hammer cracking a nut – but actually part of having a fleet is to have it built and in position, once there if it is piracy – so be it. These OPV’s really should be T31’s which in themselves are a downscaled version of what we would actually like and whilst they have certainly have some utility, for me they are… Read more »

The Royal Navy is going to need these ships so they need an up spec ASAP.

I agree with writers in stating the RN does need these vessels. What the RN needs is hulls. These 5 vessels should free up frontline warships for higher end duties. Although lightly armed they are capable for fishery protection, securing our UK EEZ and providing a presence in lower-risk zones such as Caribbean, would also be adequate for immigration rescue and patrols. What I would love to see though is the 3 batch 1 vessels leaving RN duty to be handed over to the coastguard as they desperately want more vessels. Warships IFR did a really great article on our… Read more »

I hear a lot of people saying that River batch 1 should go to coastguard (does that actually mean Border Force?) but, to play devil’s advocate, does that really make sense? The crew complement quoted for a River B1 is 30 vs the existing 42m Border Force cutters with 12. The cutters still have a quoted 14 day endurance and with civilian close-ish-to-home operations I suspect that is way more than what is probably the limiting factor which is how long staff are expected to be away from home without giving recruitment problems which is probably measured in days not… Read more »

If the RN or the Gov. had an ounce of commercial acumen it would have used the “extra” £100m it had to pay BAE because the business agreement said it had to maintain a minimum spend level to upgrade the armaments and capabilities of the vessels ordered instead of just handing it over for effectively nothing. Another wasted opportunity as if the vessels are to be up-armed in the future it will cost more than doing during the build stage. It makes my blood boil!

Warships IFR ran a great article recently on this issue. The border force do require more Ocean going vessels to patrol the UK EEZ. The river class batch 1 vessels would offer an enhanced capability to do that rather like the us coastguard cutters. The could remain armed, like the US coastguard cutters. Why not?