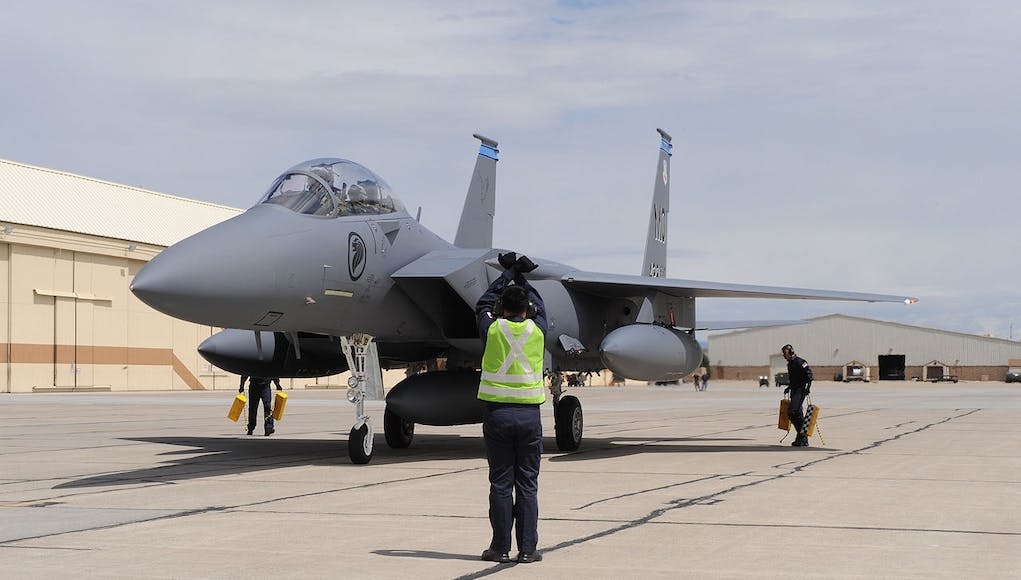 The Singaporean government has reportedly earmarked the Royal New Zealand Air Force Base at Ohakea, on New Zealand’s North Island, as a potential overseas base for one of its F-15 squadrons.

Speaking to the NZ Herald Gerry Brownlee, the New Zealand Defence Minister, confirmed that a feasibility study was underway to assess the suitability of the base and what logistical requirements would be required such as housing, education and airbase facilities.

The move could involve up to 500 Singaporeans moving into the region.

If Ohakea is found to be suitable under the study, a formal proposal will be taken to both governments for approval. New Zealand and Singapore maintain a key strategic alliance within the region through the Five Powers Defence Arrangements and have both hosted each other’s forces before.

Singapore operates similar overseas fighter detachments in France, the United States and at RAAF Pearce in Western Australia. These bases offer much greater flying opportunities than Singapore’s congested airspace and are thus ideal for training.

RNZAF Ohakea is currently home to the air force’s training aircraft and operational helicopter squadron. It was previously home to the RNZAF’s fighter and fast jet trainer squadrons. The RNZAF has not maintained fighter assets since 2001 when they were axed by the Clark government on cost grounds, a policy maintained by the Key and English governments.

Brownlee highlighted the strong strategic and economic benefits to New Zealand for the proposals. Particularly through 500 additional people moving into the Manawatu region and providing a boost to local business.

At this stage no set timeframe for the move has been announced. Brownlee however confirmed that there was a deadline for the proposal to be submitted and that he anticipated the whole process would take a couple of years to allow for preparations to be made before the squadron is deployed.

About time the RNZAF acquired its own fast jets. As an independent nation it should not have to rely on it’s neighbours and allies for a critical element of it’s Defence responsibilities.

In our neck of the woods we call that “the Ireland situation”.

If I were in charge and money was NO OBJECT I would have offensive strike wing aircraft based around the country, at least a dozen Type 45 Destroyer and our land forces would have all the bells and whistles. The theory being , it is better to have them and Not need them than to need them and not have them.

The F 15 is still a magnificent aircraft

Good heavens, the things you learn. I had looked at their navy, but not the air force. So the RNZAF has 6 P-3 Orions, and not one single fighter -r multi-role. They do have Super Seasprites for anti-sub, a couple of frigates and OPVs.

Don’t know what to make of it, to be honest. NZ has an AA / Aaa stable credit rating, and a 25% debt to GDP ratio! Makes you think, Australia has a good force of Hornets, with 70 F35 on order apparently.

Any form of militarisation however is politically tricky in NZ.
There is fanatical opposition to it led by their Green Party.

Well indeed, and the argument I guess would be “who would want to attack us, we’re friendly” – same as some in Scotland think. And that argument is more valid for NZ. Mmm, Australia defence at 2% GDP, NZ 1.2%. Not bad. The question would be does NZ have enough to have Australia’s back for subs, and secondly, how much does NZ contribute to 5 eyes and is that expenditure included in its defence spend? I still think NZ should have at least 1 sqn of fighters though, even if not top of the range or even supersonic! What about… Read more »

Comparing % GDP spends is only part of the story. There is a massive difference in scale between the two countries (and we’re not just talking about the size of the land mass to defend). Australia has population more than 5 times that of NZ. In fact if New Zealand were a state of Australia it would narrowly pip Queensland as only the third largest state. But here’s where the difference in the two country’s economies is telling. The state of Queensland alone has an economy 1.8 times of NZ’s entire national economy. Australia has the world’s 13th largest economy… Read more »

Well OZ my own perspective is from Scotland, perhaps Independent in 2021, having to have our own forces with roughly 1/11th the economy of the rest of the UK. The problem I see is that it’s not a straight comparison because of “overheads”, and therefore economies of scale. A straightforward example I’m thinking of more and more is the QRA at Lossiemouth and Coningsby. On a straight split you could say we’d have perhaps 10 Typhoons, almost a squadron, few swaps for oter stuff, a full sqn. But what do we do with them – send them up with binoculars… Read more »

For someone who actually lives in NZ (near the Ohakea base) – I strongly object to this idea, and I’m sure the majority of the population here will not want jets flying over our heads and causing disruption. Especially foreign jets. The con’s outweigh the pro’s, there’s very little benefit for the locals like myself. If they were RNZAF jets, then there may be more support for it.

Object all you like, jets are the kind of thing you might dislike a little until you need them, at which point you thank your lucky stars.
Nz dorsnt have the scale to support the infrastructure and skills for its own jets so it makes sense to work in multinational teams. Having said that, nz isnt spending enough gdp on defence. Whatever they spend it on could be used to police the fisheries better, too, its like the wild west out there in the Pacific.

Oh,and I live in NZ too, next to a base.

I just don’t want new recruits practicing their flying over my house with tonnes of metal, jet fuel, and bombs… Don’t get me wrong, I’m all for having some jets to police NZ skies, but only under direct NZ government control. NZ’s best defence is its remoteness, this proposal is inviting a foreign military onto our doorstep, whats been said so far regarding this proposal has mainly been in Singapore’s interests, there isn’t much said about what they can offer NZ apart from the very vague “strong strategic and economic benefits to New Zealand”. Will these jets be under the… Read more »

Joke really NZealand get some self respect. Sqn of used F16 from USAF. Leased, how difficult is that…! Singapore can finance it……rrrrr bet their not keen on that idea lol.

NZ had a squadron based in Australia to train with and against the Aussies. So we’ve done the same as the Singaporeans.
Even a handful of F-16s or EA18Gs would maintain our ‘independent’ foreign policy.
The next conflict will be a Falklands, another failed state like Timor, troop support in another Afghanistan or area denial at sea.
So an amphibious assault ship/helicopter landing dock, would be useful, which can also multi-task in the disaster relief, ship to shore role.
History tells, we need both soft power and hard power.

Interesting as the runway at Ohakea isn’t long enough to support the F-15e strike Eagles in their current configuration. The jets deployed there earlier this year for the airshow and then onto Avalon in Vic, Aus. Talking to the pilots, I asked why the Strike Eagles weren’t carrying thier conformal fuel tanks, that give them the range and weapon load that sets them apart from regular F-15 Eagles, and they said that the runway wasn’t sufficient to support them so they removed them to lighten the birds so they could fly in and out of the base. So we can… Read more »