An MQ-9B SkyGuardian is over Scotland and is being flown to demonstrate its “capability in a maritime environment”.

The drone is taking part in Joint Warrior, a twice-yearly UK-led NATO exercise.

The drone has already been operating from RAF Waddington in Lincolnshire, for this stage of its trials process it is flying from RAF Lossiemouth in Moray.

An MQ-9B SkyGuardian is over Scotland and is being flown to demonstrate its "capability in a maritime environment". The drone is taking part in Joint Warrior, a twice-yearly UK-led NATO exercise. pic.twitter.com/0RpSwjoTAx

The aircraft is effectively a prototype for the ‘Protector’ drone. A fleet of 16 Priotector drones are to be stationed at RAF Waddington replacing the less capable Predator drone fleet. You can read more about UK plans for the type by clicking here or by clicking the link below.

Second Protector squadron to be 13 Squadron

The Ministry of Defence had submitted a proposal for two ‘Temporary Danger Areas’ this summer to protect Skyguardian operations at Waddington and Lossiemouth.

Details of the MoDs submission to CAA can be viewed here. Further, the UK Civil Aviation Authority has granted the request for the two temporary danger areas at both UK bases to allow the flights to take place.

The CAA said it was “satisfied that it meets the safety requirements for a large remotely piloted aircraft”.

“Whilst SkyGuardian could operate in a slightly smaller volume of airspace we are aiming to emulate the Protector flight profiles in order to see if the airspace can cater for typical Protector departure and arrivals in the manner which the RAF intends to train its crews.”

Great , we should base some at Kinloss…

Should have kept all Maritime patrol at Kinloss and combat at Lossie, think Kinloss is now another Army barracks…. Army SLAM upgrade progam is to used RAF stations rather then build new barracks

As for SLAM, plenty of new barracks accommodation has been built, like at Tidworth and Larkhill, they are not RAF.

Using surplus RAF stations also predates SLAM and makes sense if only to keep them in the defence estate in case they’re needed again. Fuel, ammunition and hardstanding/runways are not cheap to replicate.

I met some of the Army Guys at Kinloss, they are the Army Runway repair engineers so Kinloss is handy.

I was based there for 8 years, lovely place, soon as they made all the major investments in the mess and accommodation…should have realised they were about to close it as an RAF base ! now it has a handful of Royal Engineers and the camp is half empty im told. Runway still fully operational for a secondary landing for Inverness airport as the weather is much better at Kinloss (I was repeatedly told it has a micro-climate)

Why replace the Predators? Why can’t the Predators act as a reserve drone squadron? We seem to always have issues with mass by replacing like for like or replacing like with less.
If something big hit the fan, I’d rather have a bunch of lower end assets ready to go than wait to build more of a current generation etc.
Surely the Predators aren’t THAT incapable?! Are they? Or have they reached their max flight hours I wonder.
[email protected]

Protector can fly in UK airspace.

Agree in an ideal world keep the Predators in the ME. Crews are limited I guess.

To be precise, they are Reapers!

Thanks Daniele,
I guess I’m thinking that, at a time of war, I think we’ll have plenty of volunteers sign up for ones country… Go through training, only to find no platforms to fight with. It frustrates me that we don’t have reserve platforms if we ever needed to surge anything… or loose the high end stuff early in a conflict.
Ugh rant over lol
[email protected]

We are getting rid of thousands of army vehicles lots armoured and we have already got rid of loads. We are reducing numbers of newer stuff too. We should try keep 100 odd Challenger 2s as reserve but can’t see it happening sadly.

Morning D. A thought, if Reaper deployed over international waters on Maritime sorties, would that negate the local airspace restrictions? Appreciate some flexibility is need to transit in and out of Lossie.

As far as crew goes, there will be a few ex 100 sqn Hawk types available from next year (and a few ex Hawk Navy lads).

Seems a waste of a useful asset, retiring Reaper as Sky Guardian comes on line,

Evening Klonkie. Reaper does not I think posses the advanced sense and avoid tech of Protector, so with the busy airspace around the UK? Probably not. I might be corrected on that. For me Reaper is not obsolete and I’d be happy for them to continue in the ME while Protector is based in the UK. Look up “Crossbow” and “Airhandler” programmes on RAF / USAF Reaper RPAS and Predator before them. Nothing obsolete there and a part of 5 eyes intell resources. BTW that stuffs acknowledged, it’s open source on the internet and I know of the UK based… Read more »

Like the Apaches, we could keep a reserve squadron of older ones, or keep all the 750 yank mastifffs, ridge backs ect that we are scrapping just now in a reserve role, even keep warrior as a reserve force…

Have to agree. Russia has no problem retaining thousands of tanks, artillery, rocket launchers and duff IFVs in case needed. That way if they have to put every man woman and child capable of fighting into uniform they will at least have something to fight with. Technology develops but having a strategic reserve to cover for attritional losses just makes sense. The MOD seem to think the concept of losing armoured fighting vehicles , jets or warships/ subs in combat is not going to happen. That is why we have exquisite kit but not enough of it and degibetly no… Read more »

Is there actually a difference between SkyGuardian and Protector, or are they the same aircraft? 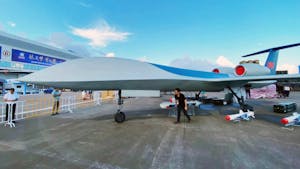