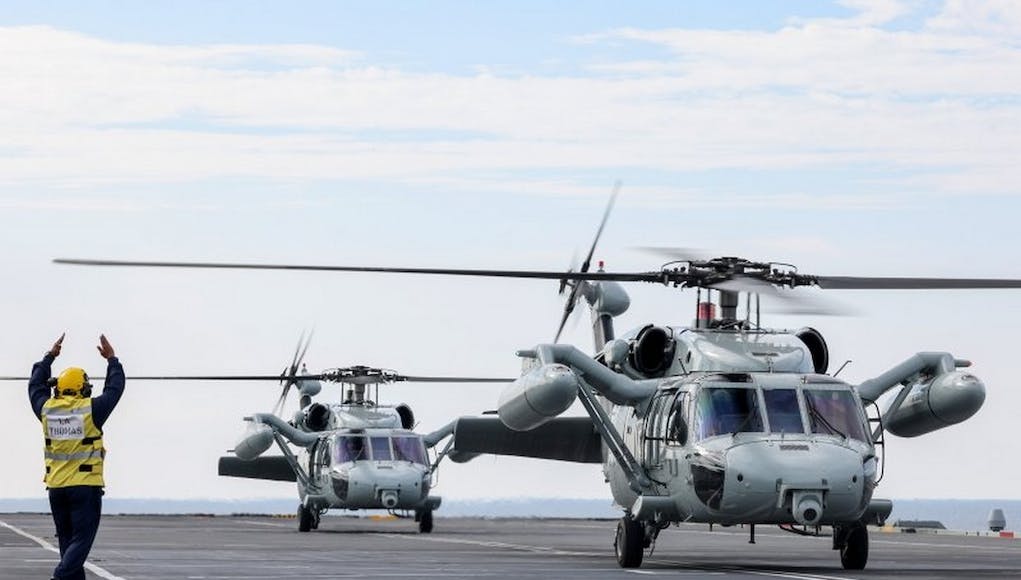 Flying in from #Busan Naval Base, great to work with @ROK_Navy. ⚓ 🇰🇷 🇬🇧

The UH-60P Black Hawk is an export version of the famous helicopter designed for South Korea, based on UH-60L with some improvements. Around 150 were produced under license in the country.

The Koreans have some Wildcats, maybe we should do some training with those as well?

Excellent opportunity to work closely with the South Koreans and the Japanese.

I’m sure we will be doing a lot of this in the years ahead.

Cw thales dipping sonor as originally designed. Would be very desirable for wildcats embarked on either T45 or T31.

I hear the Taliban have some low mileage UH60s up for sale. Maybe the RAF should buy some to replace their Pumas.
BTW I hear HMS Diamond has left port for trials after her engine defect was rectified.

Pete
Reply to  Bloke down the pub

Plenty of footage on the News last night of Helicopters in Hangars – glad to see they have been Royally FUBAR’D.

Hi Paul T, I’m not entirely sure of that. On some of the aircraft in the clip shown the damage looked a bit superficial and last minute. Seemed to me that those aircraft were damaged with bayonets and rifle butts. The Taliban will struggle to get them airworthy without outside help but I’m sure there are plenty of dodgy players in the market who could supply enough knock-off parts and expertise… There may be some local trained people as well – may be not qualified on type but I guess western standards of airworthiness wouldn’t apply. This is just my… Read more »

It is really easy to deny a helicopter. If you have time you can remove the essentials like the engine ECUs, the flight control computer, fuel and hydraulic pumps and any other other LRUs that use quick release connectors and fasteners. Then place a lump of PE on the main rotor gearbox. When it detonates, it will not only make the gearbox useless, but also twist the thrust decking it sits on. Thereby preventing a replacement from being fitted without a factory jig to re-center everything. If we don’t have the time and have to exfil in a hurry, we… Read more »

Daveyb…… do you think that some will end up flying in transport planes to China for measuring ,copying and repairing
Ian

At this stage of the game I wouldn’t be surprised, but I doubt it. These Blackhawks are the basic army variant. The Chinese already have a reversed engineered version of the Blackhawk with their Harbin Z-20. The secret gear, such as the comms crypto and IFF would have been removed prior to it being denied.

a handful of ball bearing or similar into the turbines would probably be quite effective too. I doubt that they have too many people or facilities capable of stripping/rebuilding those. I imagine that the yanks didn’t want to make too much noise before they left at risk of the taliban realising what was happening.

Willy Pete or Thermite will properly break whatever it is applied to.
Also its advisable to smash and break the same thing on every aircraft…it stops cannibalising many to get a few working.

Lol, that visible damage was either from taking out the avionics or just an extra ‘fuck you’.

And those Sea Knights are death traps when they *have* the mechanical support they need.

They have been flying Blackhawks.

some of those cockpits looked quite analogue to me. Dial glasses literally smashed with a hammer. I would have thought lobbing a grenade in each would be the way to go, even if a little hazardous

understanding is everything @ Kaboom, Kabul was decommissioned or parts removed. others sent out of Stan, But kit captured directly from the AFF, Is serviceable and has shed loads of spares. But what right did the Americans have to destroy kit, THAT WASNT THERES? they sold it to the Afghan Country.

Johan
Reply to  Bloke down the pub

Australian Army has 49 Blackhawks for sale with spares package. might be a better option than Honest Stans used military kit, via KABOOM. sorry Kabul

Killjoy
Reply to  Bloke down the pub

She is actually on her way to join back up with CG now . She already passed through the canal

Are we sure they aren’t TALIBAN Black Hawks?

Just been watching the new bbc series about the nuclear bomber/boomer deterrent. Can any one tell me how we compare to the cousins and others with marine deployments on ships and subs?
I believe they have teams to handle security in ports and protect senior officers. Does the RN do similar or do we have to few marines? If so do we have marines manning ship guns? What makes a gun marine rather than navy manning? Anyone know?

Crabfat
Reply to  Andy a

Was also surprised to see a yellow Sea King helo being used. Thought they had retired them? Can anyone bring me up to date?

Andy a
Reply to  Crabfat

I noticed that, think just them using something everyone would recognise

There is a series called Warbird Workshop ( from memory ) on freeview where a Sea King was bought back to Flying condition, useful income for it as a TV prop I’d guess.

There is one ex RAF Yellow Sea King privately owned by an enthusiast from Somerset if I remember rightly. I watched a TV programme of them restoring it recently.

Thanks, Micky, Paul & Andy. I guess it’s a bit of artistic licence. Couldn’t imaging MOD lending them a Merlin! Cheers.

Daniele Mandelli
Reply to  Andy a

43 Commando for security of nuclear deterrent while in port.

42 has various roles aboard deployed ships. I believe M Coy carries out Force Protection, L Coy is JPR, and J Coy other security tasks. They took some of those roles from 43 when the Commando’s were reorganised.

None of those involve manning a ships weapons as far as I know.

Andy a
Reply to  Daniele Mandelli

I know on rfa years ago certain weapons were deemed expert and marines used to crew them. Just wondered if still did maybe 30mm or phalanx

Gunbuster
Reply to  Andy a

Royal mans RFA and RN weapons if onboard…
They are there so they get used… otherwise they make the place look untidy and spend all day waiting in a queue for the Colonel to open.

Andy a
Reply to  Daniele Mandelli

Have seen them manning mini guns and 30mm mounts on destroyers.

Marines don’t deploy on submarines as a rule, especially SSBNs. SF use SSNs for insertions as and when, but that’s it.
43 Commando RM are the Fleet protection group based in Faslane, and are tasked with protecting the nuclear deterrent.

I thought 43 is nuclear security snd 42 is fleet work. Just wondered if did it on subs. Mind would be bit much to ask marines to handle that for months

Only time RMs go on SSBNs, is when we sail or when we are coming back and are met at the Cumbrae gap by police launch/ribs to escort us in. We take a marksman/sniper with us for extra force protection as far as the gap, then he hops on to the rib and goes back to Faslane. It’s designed to stop over enthusiastic plonkers from trying to get onboard in the Clyde.

Seeing this makes one proud to be British

Great Army and Millitary South Korea has, they always get underestimated, they are far more powerfull in equipment terms than UK. Nukes not included.