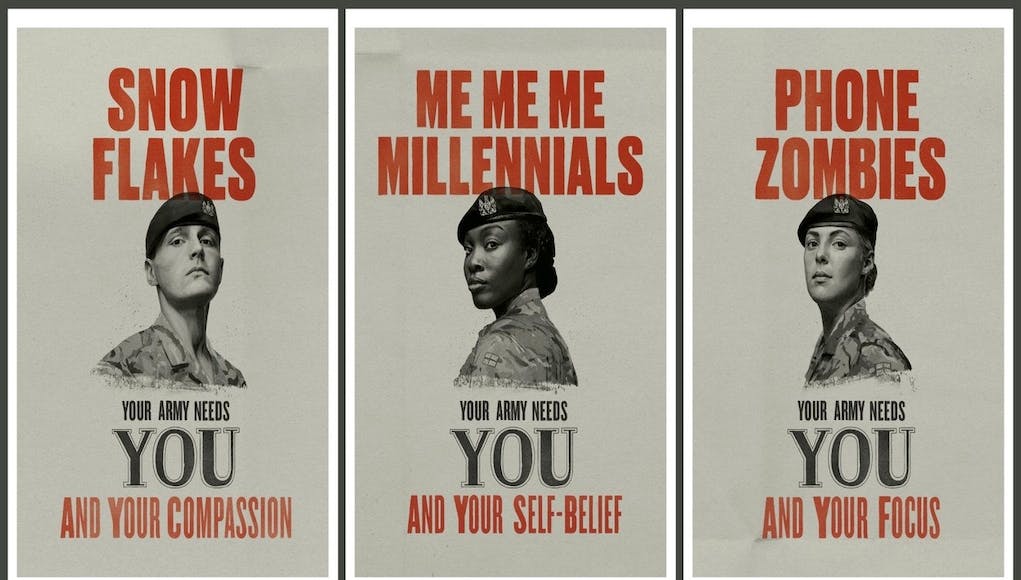 The British Army recently launched its latest recruitment campaign ‘Your Army Needs You’ and the results have been encouraging, despite earlier controversy.

The campaign is comprised of a series of posters and adverts and designed to show that the Army looks beyond stereotypes and recognises peoples “need for a bigger sense of purpose”, according to British Army Major General Paul Nanson.

According to official figures from the Ministry of Defence the Army had 9,700 applications in the first three weeks of January, a five-year high compared to 5,437 the previous year.

The surge in the number of recruits comes amid what many referred to as controversial attempt to appeal to the younger generation. The controversy appears to have been short lived however, the campaign appears to be working.

“To ask the Secretary of State for Defence, how many inquiries the British Army received as a result of its recruitment campaign referring to millennials, binge gamers, phone zombies, and snowflakes.”

Mark Lancaster, the Minister of State for the Ministry of Defence, answered:

“The latest Army recruitment campaign has received a very promising amount of interest, evidenced by the high number of hits to the Army jobs website and increased applications since its launch.

The British Army insists the entire advertisement campaign is focused around ‘unlocking potential’ and is designed to illustrate a sense of ‘belonging in a team where anyone can do something that matters’.

It appears to be working.

Really hope that the spike comes from the media frenzy over poor recruitment figures and missing personnel in key areas rather than this snowflake campaign.

What’s funny is the negative coverage it got reached far more people than the official advertising done by the Army, and big youtubers with millions of subscribers have done multiple videos slamming the Army recruitment campaign and would have reached many millions alone, maybe it’s the new Army recruitment strategy, that other Army add with the Muslim praying during a military exercise received lots of criticism also. But silver lining and all, now the army might finally get upto the shameful 82,000 number that was promised by government and hopefully the Army reserves might number the 35,000 mark finally.

There have been several military tv documentary series recently on ITV (paras, men of war) Channel 5 (young soldiers, warship at sea and red arrows) and Britain’s biggest warship on the BBC. It all helps. But the truth is wars and recessions are the biggest recruitment aids to the forces. Neither of which are attractive options.

Absolutely agree, it would be horrendous to think the small armed forces would be full of entitled snowflakes, personally I think this campaign was deliberate in that it would put off the typical young guy who joins the infantry, normally tough, from council estates etc, nothing more off putting then being labelled a snowflake.

I think the ads are quite good – though this is the first I’ve seen of them. question is will the calibre and motives of any applicants be good enough – let’s hope so

it,s ok running the add and getting a spike in interest but if Capita cannot speed up it,s routine from when people apply to getting them through the gate it,s a waste of time,i Know a few young lads who were going to join but after waiting nearly 12/15 months they went on and got civilian employment instead and i can,t blame them 12/15 months is a long time,When i joined in the late 80,s you went down the local recruitment office, had an interview,a few days later did some basic tests followed by a basic medical,where by i was… Read more »

I like the ads. They are positioned in ways which might make sense to young people today (I think, I stopped being young a long time ago). If they feel odd or unusual to you – maybe that means you aren’t young anymore either 🙂

My 18 yr old nephew is in the process of applying for the Household Cavalry. He’s certainly a screen addict and has been privileged to a degree but has at least wisely invested time playing rugby to a good level, ACF and the DoE Gold award. He has spent a lot of time on Dartmoor and in the Brecon Beacons. His application process is slow but for him I think it suits him since he has time to think everything through and prepare himself. He needs to stay focused for the last few months of his colleague course. Typical young… Read more »

I wish there were a more innovative way of introducing people to the service life. I couldn’t serve if I wanted to because of a disability. But I admire those that do. I hope some imagination is used to get youngsters to see that going to ‘uni’ is just a way to get into debt for what for many is a useless piece of paper. Help to get ex-services back into civvie street would also be money well spent.

Correlation does not equal causation. Isn’t there always a surge in recruits in January? This really doesn’t mean anything.

You’re correct of course and this might just be noise in the data. They mention it is an increase on this time last year but we lack broader context about patterns of recruitment to make sense of that limited piece of information.

However insulting this may seem to people that have served (or do serve) I really do think it a genius campaign.

The crux of the matter was brought to light in 2012 with the new Quatermaster in Skyfall.

“I’ll hazard I can do more damage on my laptop, sitting in my pajamas”

Bond’s response is equally important but in modern warfare BOTH are required.