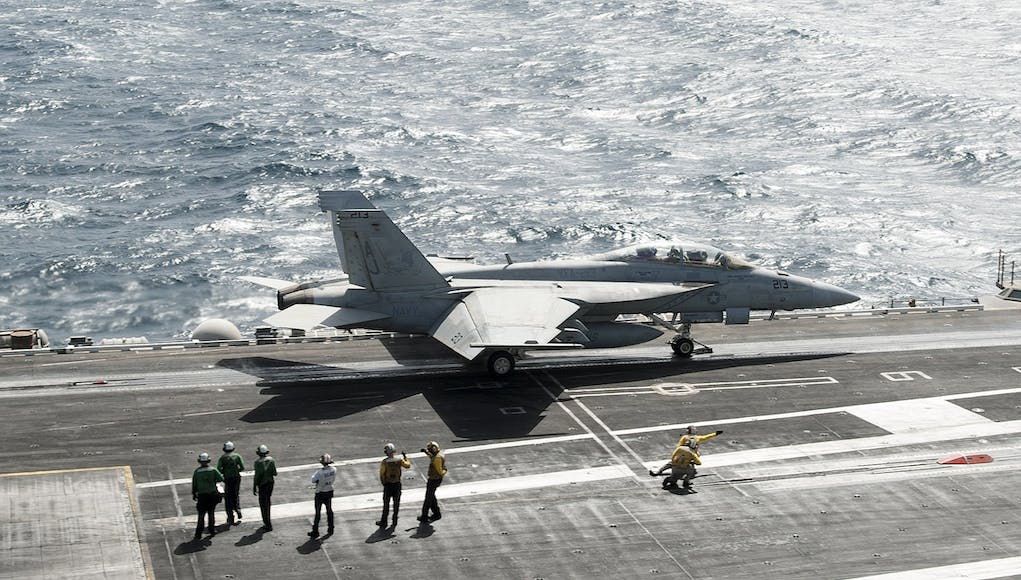 USS George H.W. Bush is part of Operation Inherent Resolve in and has been “critical” to the efforts to defeat Islamic State.

Capt. Will Pennington, Bush’s commanding officer said in a statement to the press:

“The defeat and destruction of ISIS was our primary concern and our ship-air wing team performed superbly.

Moving that effort into the 5th Fleet AOO allowed us to not only continue that critical fight but to also demonstrate our commitment to our allies and partners in a critical region of the world.”

The supercarrier and embarked Carrier Air Wing 8 has conducted more than 4,700 sorties and used 813,000 pounds of ordnance in support of Operation Inherent Resolve (OIR), made two port calls and travelled more than 27,000 nautical miles.

The Carrier Strike Group continue to conduct sorties in support of OIR.

USS George H.W. Bush is the tenth and final Nimitz class supercarrier and is named for the 41st President of the United States and former Director of Central Intelligence George H. W. Bush, who was a naval aviator during World War II.

Construction began in 2003 at the Northrop Grumman Newport News shipyard’s Dry Dock 12, the largest in the western hemisphere. She was completed in 2009 at a cost of $6.2 billion and her home port is Naval Station Norfolk, Virginia.

Following a 14-month shipyard availability at Norfolk Naval Shipyard and a compressed training cycle, George H. W. Bush and Carrier Air Wing Eight departed Norfolk in January for her third deployment. She transited the Strait of Gibraltar on the 2nd of February and after a port visit to Souda Bay Crete, she again participated in strikes against Islamic State in support of Operation Inherent Resolve.