DSEI 2021 – The Tempest flight test aircraft programme will see a Boeing 757-200 completely overhauled, turning it into a flying testbed for the technology that will go into the UK’s future fighter ‘Tempest’.

Leonardo has placed the latest in a series of contracts with UK-based aviation services company 2Excel to commence the next stage of the Tempest flight test aircraft (FTA) programme.

“The programme will see the partners completely overhaul a commercial airliner, turning it into a flying laboratory for combat air technology. On-board, scientists and engineers will test futuristic sensors and communications for the Future Combat Air System that the UK and its international partners are developing to fly into service in 2035. Named ‘Excalibur’ after the legendary sword of King Arthur, the aircraft is being modified to supplement the transformational ‘digital-first’ approach the Team Tempest partners are taking with regard to the testing and evaluation of Tempest’s next-generation electronics.

Excalibur will provide the real-world environment necessary for the latter stages of development of the complex, integrated sensors, non-kinetic effects and communications Leonardo is developing. Excalibur will be available to the international partners to de-risk technology being developed for the Future Combat Air System and the aircraft could also be used to complement the development of uncrewed technology, including acting as a control hub for uncrewed platforms undergoing test.”

This latest contract builds on two years of work by Leonardo and 2Excel on the FTA concept and design phase. That phase saw the partners evaluate the suitability of a commercial airliner as a testbed and digitally model some of the proposed modifications, including significant changes to the nose section. The new contract covers preparatory work on the real aircraft procured by 2Excel and will allow development work to continue at-pace.

In addition to its primary role, acting as a testbed for equipment and significantly de-risking the programme, Excalibur is also expected to see use under other UK and international flight test programmes.

“The FTA concept and design phase proposed the initial outline design solutions for Excalibur, incorporating Leonardo’s requirements for the placement of sensors and supporting equipment both internally and externally on the aircraft. The activity considered the size, weight and power requirements of the high-tech technology which would fly on Excalibur and identified appropriate locations and the provision of necessary services e.g. power, cooling, racking, observer stations, computing and data recording.

Candidate external modifications, including a significantly modified nose section, have been modelled to allow analysis of the aerodynamic and structural impact on the aircraft whilst meeting the Leonardo equipment installation requirements. Over the next 12 months, more detailed design activities will continue on the installation of Tempest equipment and detailing the flight test schedule. Leonardo and 2Excel will survey, inspect and confirm the proposed installation solutions. In addition, Excalibur will have a significant fit of equipment under test, including a ‘representative cockpit’ in the passenger cabin. Flight test instrumentation will be fitted in advance of baseline flight tests required for future certification of the modified aircraft.”

2Excel have procured Excalibur and are preparing the aircraft for modification at the company’s large aircraft engineering facilities at Lasham, Hampshire. The existing aircraft can carry a payload of 28 tonnes (or over 14.5 tonnes when full of fuel) at 42,000 feet at up to Mach 0.86, cruising at 0.8 Mach. Its range carrying a full payload is 3,900 nm and it can fly for 8 hours.

Very pleased for 2Excel. Very professional outfit. I was fortunate to be offered a job with them 5 years ago, but turned it down to go into offshore wind. The boss is an ex Harrier GR7 pilot.

Yep. It’s all progress. Long may it continue.

Thought I recognised the name that’s the same outfit that run the blades display team.

Sure is. They do all sorts from VIP flights, Oil Spill response, and military research. And the Blade’s. A few ex Red Arrows pilots now work for them.

Sure when a couple of the blades interviewed, they suggested it was a requirement to be ex reds to fly with the team.

The Tempest DSEI stand, notice the flags. At the moment UK and Japan only have a joint fighterengine development project but the panel was told they may well officially come onboard as a joint component developer during the next few years. 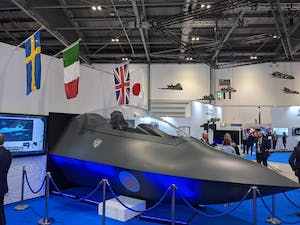 How does one? I take it you cannot just stroll up as a civvy and pay ?

Should be a professional only plus press.

I’m not sure to be honest. Probably have to be in the industry, or be part of certain defence interest groups on LinkedIn ect to blag an invite.

Any specific reason of choosing this aircraft instead of something else? Like a 737 perhaps?

Aerodynamics, electrical generation, quality of cockpit systems etc… would likely have been considerations along with what was available to use,

Very big internal space for a narrow body aircraft, good handling characteristics at max weight, good payload for size and as watch zero suggest they have good power generation.
Also weird fact they are the smallest and only underweight ‘heavy’ airliner because they use pretty much identical designed wings as a 767 their wake turbulence is close to a 747s at VR.