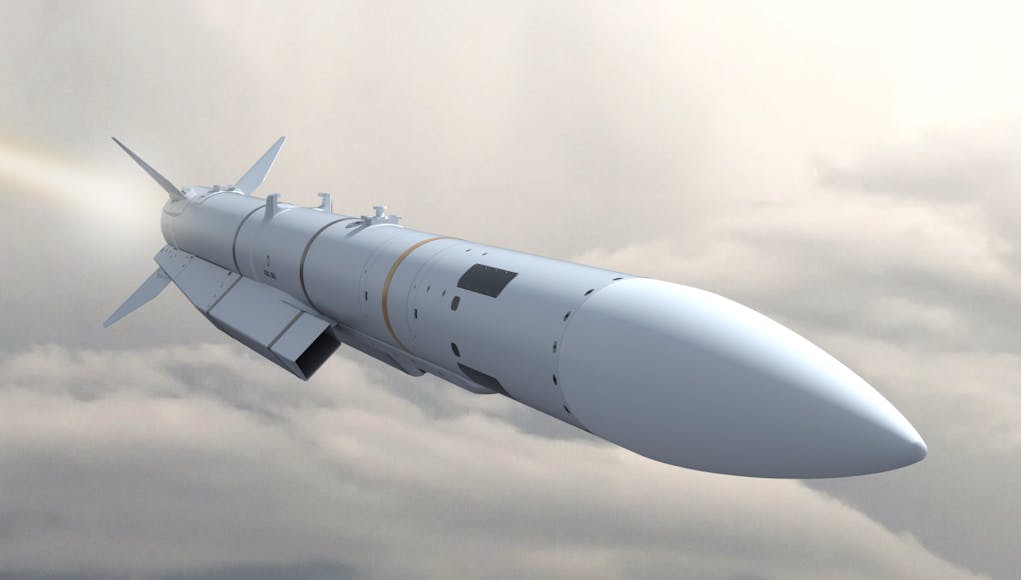 Meteor is a ‘Beyond Visual Range Air-to-Air Missile’ system developed by MBDA.

The Meteor programme sees the UK, France, Germany, Italy, Spain and Sweden working together to provide access to technology and expertise across those nations.

The missile is guided by an advanced active radar seeker and is also equipped with two way data link communication, enabling the launch aircraft to provide mid-course target updates or retargeting if required, including data from third parties.

“An active radar target seeker combined with an RF proximity fuze, both of which are highly resistant to both active and passive countermeasures, ensures reliable detection, tracking and discrimination of the target.”

Meteor, say MBDA, offers a multi-shot capability against long range manoeuvring targets, jets, UAVs and cruise missiles in a heavy electronic countermeasures environment with range well in excess of 150 kilometres, MBDA also say that the no-escape zone of over 60 km is largest among air-to-air missiles. 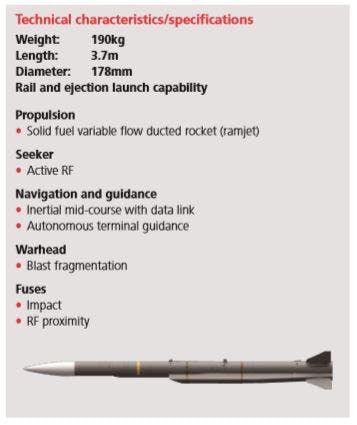 A two way data-link and an active radar target seeker ensures that Meteor reaches its target, even at very long ranges. A jamming resistant proximity fuze and a lethal high explosive blast-fragmentation warhead combine to give the missile its high kill probability.

The missile is often lauded for its outstanding kinematic performance and according to MBDA, Meteor’s performance is achieved through its unique ramjet propulsion system – solid fuel, variable flow, ducted rocket.

“This ‘ramjet’ motor provides the missile with thrust all the way to target intercept, providing the largest No-Escape Zone of any air-to-air missile. To ensure total target destruction, the missile is equipped with both impact and proximity fuses and a fragmentation warhead that detonates on impact or at the optimum point of intercept to maximise lethality.”

According to MBDA, Meteor has three to six times the kinetic performance of current air-air missiles of its type.

As I mentioned in an earlier post, time to replace AMRAAM with a new and clearly better version from MBDA.

Added information on the future update to Meteor.

Yes, it is having redesigned tail fins (shorter but longer) so that they can fit in the weapon bay of a F35B. MBDA have said there’s no performance difference. So the modification will be used on all Meteors regardless of aircraft fit.

Shorter but longer? I’m trying to work out what you’re describing there.

That’s what I was wondering but in that case is it just the fins affected or is it more? Has the whole missile been shortened and the corresponding loss of tail fin area been compensated for by making the fins wider? Presumably the issue is that the current Meteor breaches either total length or maximum diameter constraints of the internal bay so if it it a length issue then I don’t see how shortening just the fins helps unless that shortening allows the missile body itself to get shorter as well. Conversely though, if it is an overall-diameter constraint that… Read more »

It’s just the fins. They are longer in length and shorter in width for the F-35B.

But this is not a special or separate version. The rest of the missile is exactly the same, the fins are the only change. The fins are actually installed by the armourers prior to loading the missiles. It may be that all Meteor’s are delivered from MBDA to the UK with 2 sets of fins depending on which aircraft they are fitted on.

Correct. The additional length is to provide the additional lift and control authority that the ‘clipping’ of the wings loses. But thats the only changes necessary.

What isn’t clear though is if the Meteor will be compatible with the proposed ‘six-shooter’ rack proposed by LM for Amraam to enable 6 Amraam to be carried internally. The fact that it’s not proposed by Raytheon could mean it has the possibility of carrying 6 Meteor as well…might be a bit of a long shot though for the B variants with their shorter bays, so I suspect of no use to the UK.

This is what was posted on this site in April 2017: “MBDA is planning integration of Meteor on the Lockheed Martin F-35 Lightning II Block 4. The Meteor has already been checked for fit in the internal weapons bays of the jet and is compatible with the aircraft’s internal air-to-ground stations, but would require modification of the fin span and air intakes to be compatible with the air-to-air stations.”

LOL. Yes, I was covering both bases, although Rudeboy’s use of the term “wingspan” has now made it 100% clear which of my guesses was correct. Thanks Rudeboy.

Oh, sorry 4thwatch, it was you who introduced the term “wingspan”. Thanks to both you and Rudeboy for clarifying the situation so well.

What does “No Escape Zone” actually mean ? Do they mean it has a 100% hit rate at any target within 60km ? That feels like a pretty big claim.

Hi. It means even at the very extremes of the missiles range, it still has enough energy to out manoeuvre the most agile of aircraft. ?

It means the enemy aircraft cannot turn around and try to out run the missile before it runs out of fuel. If the range is 100km and the target 90km it still has a good chance of turning around and making it outside the 100km kill zone before the missile has caught it.

This is a good and easily accessible description.

Thanks for the link

Meteor has a very long and interesting history going all the way back to Sky Flash which of course was based on the US Sparrow.

I wonder if an air to ground version is feasible? Ditch the radar & add an off the shelf IIR seeker + GPS. For those small mobile targets that may only appear briefly before vanishing again. You need something with a very short flight time, that can get there quickly before the target moves off.

I’ve also thought that would be a great idea, maybe a layered air defence with a ground launched meteor and camm (sky sabre) similar to s400 and iron dome with multiple missles for different ranges

It would be very expensive…outside of an S-400 TEL there is little that would be worth the shot, particularly given the small warhead that could be carried. IIR wouldn’t be much use at range either, MMW would be used. However…MBDA did have a green painted Meteor on the Land Precision Indirect Fires proposal along with CAMM/Brimstone hybrids. Think they were just floating an idea as LRPF would be far cheaper and more useful as a high speed strike capability. The RAF and MBDA did talk about using Meteor as a high speed, long range ARM. Presumably this was in the… Read more »

An air to ground Meteor would not be for ordinary targets, but for high value, mobile, brief window targets i.e. Chief dictator/warlord/terrorist boss or mobile ballistic missile. Or targets of equal value that are time limited.

MBDA seem to have developed some very capable missiles in brimstone, CAMM’s and Meteor! Surely this could be a replacement for Astor and a mixed system would not only benefit the army (I know the army doesn’t use Astor, but only has short range air defences) but also the navy, if both could use the mark41 launcher on Royal Navy ships! I see they are working on spear 3 the third version of brimstone with a 80mile range which I think is doubled the original missiles range and an EW version! It does seem to me that taking these capable… Read more »

Manufacturers love to hype up the capabilities of a new missile. They all do that. The missile isn’t anything till it performs in real combat. Simple.

I don’t think there is any commonality between Meteor and Astor 30. If Meteor was ground launched then on paper it would out perform Astor 30. Could it be a future candidate for Naval/ground based air defence? Or are there reasons it would not be possible?

It would need a redesign for a booster to get it off the ground and up to speed for the ramjet to start working. When air launched its already in the air and has got the aircraft’s speed already working for it.

Yes that makes sense. From what I have read it already has a booster to take it up to a speed where the ramjet can take over. The air intakes stay closed during that phase. This is only from what I have read on Wikipedia mind. Seems like an opportunity to create a long range CAMM style family. Maybe its not possible or just not economical.

MBDA are looking at it as an interceptor for MARV’s in BMD systems.
But add in a decent booster and a ‘pif-paf’ system and for most engagements it would outperform Aster-30.

That is interesting, cheers.

Both the Aster and Meteor have pros and cons for surface to air missiles. One is range and the other is height. If we look as the Astor, the engine is a dry mix chemical that is burnt in a rocket engine. Once the fuel is used up, the missile is effectively flying on inertia where gravity, air resistance and drag start degrading its velocity. Conversely, the Meteor uses a “throttable” ram jet engine. A small rocket booster accelerates it to around Mach 1.5 where the ram jet can start operating. Once the ram jet is operating the Meteor accelerates… Read more »

The piff-paff of the Aster makes it more terminally manoeuvrable but only for a limited amount of time, owing to fuel constraints as per above. I’ve not recently looked what G each can pull as a quantitative comparison though. And again as per above, the suitable altitude of regime of the two missiles differs owing to the rocket of the Aster and the ramjet of the Meteor. If the BMD profile requires exo-atmospheric intercept, only Aster is suitable for this; to that end I’ve not seen research for the Meteor in a BMD role. Meteor is 1 metre shorter than… Read more »

Yes, I agree due to the Meteor’s ram-jet engine’s requirement for oxygen, its BMD would be limited to around 75,000ft. Pretty certain MBDA know the maximum altitude of Meteor and they would have classed it as secret, so we can only surmise its maximum altitude. Regardless, due to its need to breathe oxygen, the Meteor would have a very limited use for BMD. If we could combine Aster’s rocket engine with Meteor’s ram-jet, we would have the best of both worlds. The combined use of the two engines would make it very efficient. Allowing the missile to use its ram-jet… Read more »

I’d never thought of staging it that way round. It would give longer range and BMD performance in one missile instead of the variants I suggested. Good work, get MBDA on the phone!

Thanks for the information. That was a very interesting answer. Outside of Ballistic missile defence Meteor seems to be the more capable missile.

It remains to be seen how effective the piff-paff motors are after multiple uses. Theoretically, The Aster should have a better chance of a kill or doing damage as it closes with the target. This primarily due to the piff-paff motors throwing the missile towards the target. However, I suppose it all depends on the range to the target. At maximum range the Aster will be slowing down quite considerably, whilst the Meteor can nearly maintain its maximum speed.