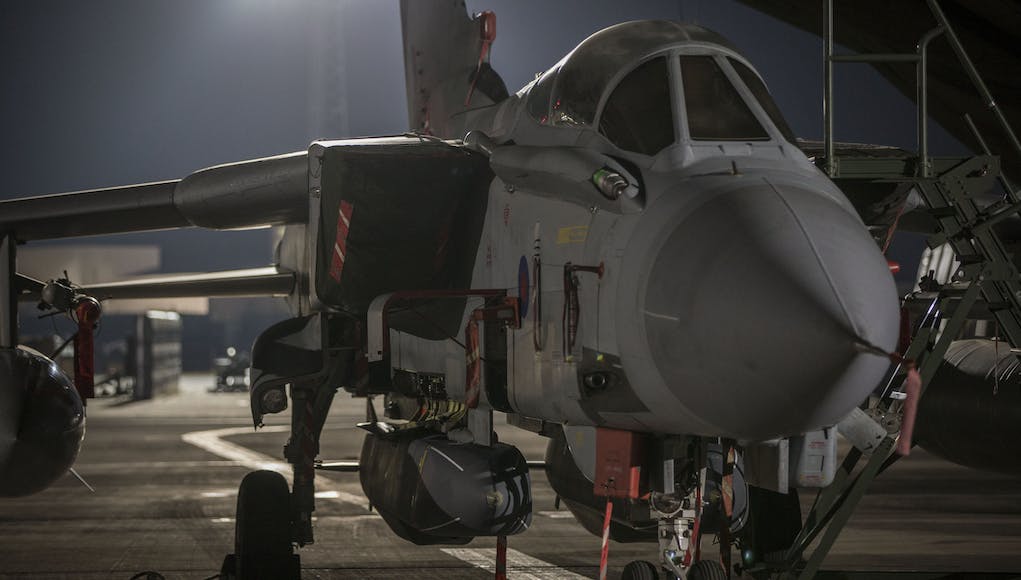 The next day, say the MoD, Tornado jets then supported a Syrian Democratic Forces attack on an Islamic State position, destroying a truck-bomb, a strong-point and an improvised explosive device facility.

With the Syrian Democratic Forces continuing their offensive against the last major pocket of Islamic State-held territory in eastern Syria, centred on Hajin, Royal Air Force aircraft have provided further intensive support say the MoD in a release.

“As in the previous month, a particular focus has been on terrorist positions north-east of Abu Kamal.

On Wednesday 3 October, an RAF Reaper detected a Daesh mortar which was firing on SDF forces a short distance away. Two RAF Tornado GR4s were also on task in the area, and they struck the mortar position with a single Paveway IV guided bomb.

The following day, an SDF attack on a Daesh position encountered a truck-bomb which was blocking their advance towards a terrorist strong-point in a nearby building. Tornados destroyed the truck-bomb using a Brimstone missile, then demolished the strong-point with a Paveway IV.”

Another building in the area was then identified as not only Islamic State-held, but a probable facility for further improvised truck-bombs. This target was also destroyed with a Paveway IV.

While all the fanfare is about the F35, elsewhere our last GR4’s continue to do the job. A bedrock of the RAF for decades, at one time, 220 or something in service? In 13 Squadrons based in Laarbruch. Bruggen. Lossimouth. Honington. Cottesemore. Marham. When it leaves service it really needs a massive send off. Another thought. This article highlights the escalated cost in how we do things. A single mortar position removed with 2 GR4 using Paveway. How much did that sortie cost? Could a Tucano with machine guns or rockets not done the same? I know we have been… Read more »

Hawks could easily do the job for a fraction of the cost. We really ought to order some advanced hawks (when they are ready) to do this job. I imagine 20 or so would be a good number.

But yes I agree with you on the Tornado. What an excellent aircraft it has been!

If you want to keep a squadron worth of aircraft deployed for a long term engagement such as Op Shader you are going to need more than 20 airframes. With only that number you’d only be able to sustain maybe 3-4 aircraft in theatre. Yes I agree it is expensive using Typhoons and Tornados to attack a couple of insurgents with a mortar, but cheaper turboprops are almost one trick ponies. Would you have been happy in a Tucano or even a Hawk over Kuwait/Iraq in 1991 or Serbia in 1999? If the Uk was flush with fast jet squadrons… Read more »

Would have to be in addition for me.

Not at all. I didn’t suggest such a thing. However Additional aircraft would be great, especially as they would be cheap to buy, maintain and operate.

The purchase price and operating costs of a squadron on Hawks (or COIN Turboprops) would be such that they would be in addition to rather than instead of. The extra aircraft would pay for themselves in the saved costs and flight hours on Typhoon (too late for Tornado). RAF scared to buy cheaper aircraft like this though as they fear some idiot politician would use them as an excuse to cut Typhoon/F35 numbers. (Similar reason why RN probably chose to have the OPVs virtually unarmed — that way they wouldn’t lose more Frigates). What we have done to deserve such… Read more »

Spray the Red Arrows grey and use them as a frontline squadron. How on earth can a display squadron be justified when overall numbers are so low? It would be like the RN painting a frigate Red White and Blue and just moving it around from port to port for recruitment purposes. Utterly pointless when every asset has to work so hard nowadays.

lets not forget that it is a fiercely contested airspace…potentially. Would you want hawks dropping dumb weapons with marauding Russian aircraft if it turns “hot”. also with GR4/Typhoon dropping smart weapons, collateral damage is rare. Imagine a classic COIN aircraft with lower cost weapons…..it is political as well

the failing occured as far back as accepting the hawk design for it not to be enabled for aggressive actions was short sighted in the least, its like having major assets like carriers and amphibious ship and not arming them. a hawk should be enabled for ground support roles something that was lost when harrier was withdrawn

The weapon that is required for low level close air support is the CRV7-PG. This is a standard 70mm CRV7 unguided rocket but with a guidance package added, much like adding a Paveway package to a 500lb dumb bomb. Check out the link below: http://cradpdf.drdc-rddc.gc.ca/PDFS/unc101/p533472_A1b.pdf Unfortunately the cost of operating the Tornado in the CAS role has to be weighed against the training it gives the crews plus all the support personnel to put the aircraft over the target. Realistically, the best CAS aircraft for that particular theatre is the Reaper as there’s a very low threat against it. The… Read more »

I know training and maintenance crews are being switched to typhoon, but surely it wouldn’t hurt to keep the tornado in storage just in case? Better than just getting rid

Typhoon will do everything Tornado does….the problem is numbers. Storing tornado is not a solution and the supply chain is now cut anyway