A Typhoon display team jet has been flying over the White Cliffs ahead of the anniversary of the Battle of Britain.

The Royal Air Force say that the Typhoon, callsign Blackjack, which is based at RAF Coningsby made several passes along the landmark as part of their return flight from the south coast after a successful four days of displays at the Bournemouth Air Festival.

“The sortie provided essential training for Quick Reaction Alert, which is the pilots primary role based at RAF Coningsby.  The aircraft was conducting a training exercise to intercept a low slow target in unfamiliar airspace.

The Cliffs saw plenty of action in the summer of 1940 and has a long history as a location for observation and warning.  The location hosted a Chain Home Radar Station, which helped provide an early warning system along the east and south coasts of Britain.  By 1940 the chain was completed and could detect low-flying aircraft which proved invaluable in getting RAF Fighters airborne.” “It was an honour to fly the Union Flag over the White Cliffs to commemorate the anniversary of the Battle of Britain.  Looking down to see the stunning coastline and the pure whiteness of the cliffs, as the Fighter Pilots who fought in the Battle of Britain would have done many years ago, was an incredible experience.”

Looks good and a respectful gesture, however im sure in some of the daily rags and twitter losers, the thought process behind it will not be understood and the usual drivel comments about BREXIT/Right wing/Racist/ blah blah will spew forth. But as I said, looks great, still a fighting platform and very respectful.

I’m waiting for the moans that the flags of other nations are not displayed. Czechs, the Poles, and so on. Anything to downplay or belittle Great Britain.

Well, they are welcome to send a jet to fly by too. Would be fantastic, and the Northolt Wing were fanatical fighters.

Spot on, I think our relationship with Poland has always been important, but, in these modern times, it should be more so. We do have a very simliar thought process (IMHO) as the Polish, and they are one of the few countries in Europe who are taking defence seriously. And they are also running out of patience with the EU dicators and their dreams of a Great Europe, at the expense of individual countries freedoms. Poland was under the Soviet yoke for many years, let down by Europe on more than one occasion and they know that freedom comes at… Read more »

As an expat, a plug to the NZ and RSA contribution( go Sailor Malan!) NZ would like to send a jet, however we have none! My neighbour is currently flying the RAF flag in remembrance.

I wish the tranche 1 typhoons would be given to the Red Arrows instead of being scrapped!! A Typhoon equipped red arrows would be amazing… dont think typhoons are suitable though are they.

I think that you would end up with a very different display – think Thunderbirds or Blue Angels – & the cost of operating them would be a signifiant uplift from a trainer.

The RAF will be retiring Typhoons and replacing them with Tempest/FCAS, so no hope on that one!

“Answering a question in the House of Commons on 13 September, Minister of State for Defence Jeremy Quin said that uncrewed aircraft are set to replace the Royal Air Force’s (RAF’s) Eurofighter Typhoons in the air-to-air role from the mid-2030s, supported by the Tempest fighter now being developed as part of the wider Future Combat Air System (FCAS).” 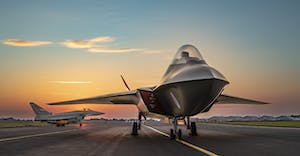 Some more positive news on the Typhoon front.

Unfortunately not. Would be fantastic to see. But the operating costs would dwarf that of the current Red Arrows with Hawk T1.

Yeh it’s a shame 🙁 the sound of 1 Typhoon doing a display is awesome, the thought of 9 would be mind blowing but would probably lead to numerous complaints 🙁 but as is the way now ££ is king. I expect the pilots would prefer for long overseas trips being able to get tanked to the US instead of hopping Iceland/Goose Bay.

Appropriate given that yesterday was the 81st anniversary of the day that the Luftwaffe launched its largest and most concentrated attack against London in the hope of drawing out the RAF into a battle of annihilation, an anniversary that I believe was hardly, if at all, mentioned by any British press at all.

EXACTLY! B of B Day. How many young adults are even aware of it? They hit us with everything they had and 12 Group were waiting for them over London once they’d fought their way through 11 Group. Many of their bombers just dropped their loads and fled back to France. Ray Holmes RAMMED a bomber headed for Buck Palace as his ammunition was spent. He died long ago but no doubt was treated as just another old man by the younger generations who know not what our “few” did. Still gives me goosebumps. So proud. Me, old fashioned and… Read more »

I wonder how many in our modern society today still appreciates the sacrifice made by the Few, many of whom were aged in their early 20s and sacrificed their lives so that we can enjoy the freedoms we have today?

Well considering the level of mass immigration and that many probably don’t give a toss about the nations past, or are even aware of it, then very few.

Those who educate themselves or at least acknowledge it, have my respect.
Do schools teach it?? No idea. I left school 33 years ago.

Not being rude, but blimey that’s not a well designed paint job. I’m sorry but if your using our nations flag do it well.

I know some of you read it as respectful and I understand why, but I think our nations flag When used needs to be represented the best way possible.