According to the Ministry of Defence, operations by the Syrian Democratic Forces (SDF) near Raqqa also continue to receive support. On Wednesday 25 January, the SDF reported that they were taking fire from a group of Daesh fighters with an armoured personnel carrier, to the west of Raqqa, on the north-eastern shores of Lake Assad. Despite challenging weather conditions and the proximity of the SDF to the targets, two Typhoons used a pair of Paveway IV precision guided bombs which removed the threat.

In a press release, the government said:

“Daesh targets have been less common since their defeat in eastern Mosul. As a result, no RAF attacks were required in the latter part of the week. Our aircraft, however, continued intensive armed reconnaissance patrols to gather intelligence on suspected terrorist positions and movement, and to be ready to strike should the situation require. Sentinel aircraft have also flown a number of surveillance missions, similarly gathering valuable information on Daesh. Hercules transports have also continued their essential role in providing logistical support required to British forces in the Middle East, particularly for the training and liaison teams deployed as part of the Coalition’s efforts to help the Iraqi security forces further improve their capabilities.” 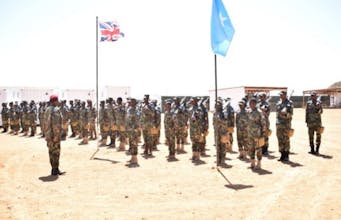