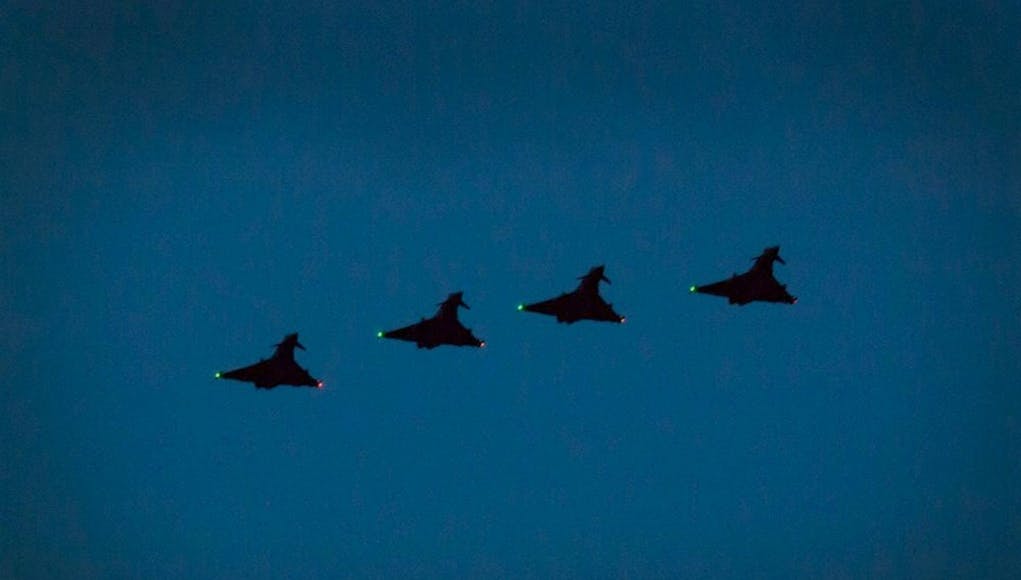 Typhoon flew from Scotland to Romania on Monday to continue their enhanced Air Policing mission which begun last year, say the MoD.

The Typhoons from Number II (Army Co-operation) Squadron left their base at RAF Lossiemouth in Scotland on Monday to join 135 Expeditionary Air Wing (EAW) at Mihail Kogalniceanu Airbase near Constanta in southeast Romania.

In charge of 135 EAW is Wing Commander Chris Ball who said,

“This is an important role for us that will build upon the success of last year’s mission to help to secure NATO airspace in the Black Sea region. These are interesting times but from the Black Sea to the Baltics, NATO’s resolve is steadfast to defend itself against any threat.”

The EAW is based at RAF Leeming in North Yorkshire and consists of one hundred and fifty personnel, including II (AC) Squadron, drawn from stations across the country to form a unit capable of carrying out all the necessary support activities to maintain a fast jet operational force, say the RAF.

“The RAF will carry out its enhanced air policing role in the region from May until September. The deployment, confirmed by the Secretary of State for Defence at the end of March 2018, is part of a long-standing continuous peacetime mission undertaken by NATO allies.

The RAF is no stranger to the NATO air policing mission, it has deployed Typhoons to the Baltic States in recent years to protect NATO airspace in the region. Once again, the RAF will be flying in partnership with Romanian MiG-21 Lancer aircraft.”

We need more of them!
Hopefully with the new ej2x0 engines and conformal fuel tanks for the entire fleet.

I wonder if they were fitted with Meteor? I understand it was entering frontline service early 2018 onboard Typhoon.

A flight is 3 or 4 aircraft. A squadron is 12 – 24 aircraft. A wing is 36 to 72 aircraft. So do you think he is embarrassed about earning a wing commanders wage to command a flight ? Well I suppose we should look on the bright side at least for a few months of his career he’s going to be earning someone’s pay !

It’s crazy when you think about it, when Tornado retires this year (or next) the Typhoon will be the only combat aircraft in active service until the F35’s are fully operational, that’s basically 100 active aircraft. Talk about cutting it to the bone. Even if the Tories are just trying to make quick saves while the budget is tight knowing the long term plane is 100 active typhoon and 100 active F35 where do they plan to get the extra money from when the budget is already stretched as it is. We cut the harriers and invincible class early which… Read more »

Concur with the logic, seems a bit of over kill.
However the Wg Cdr will be their not only as the the senior officer on Det with all the privileges offered to him under MAFL but as the senior flying advisor on station the the Romanian Air Force, to do that he needs the coverage of the rank he is afforded.
Small contingent of aircraft yes, on a Sqn this is normally a Flt and commanded by a Sqn Ldr but in this role seniority is a necessity and is therefore required.

Yeah I remember an Army officer saying similar about why any British Army officer has to be of a similar rank to his US counterpart. Apart from being self – serving it also results in the British Army being ludicrously top heavy with Generals etc. But I’m sure that is entirely an unfortunate coincidence !

So how many Typhoons will go to Romania ?

1 aircraft at 5
1 at 15
1 at 60
1 spare
This is air policing not air combat. The numbers deployed against the airspace to be policed are appropriate and agreed by NATO and Russia.

I thought QRA was done as pairs

This is air policing, not QRA. Sovereign state has responsibility for QRA, this falls to the MiG-21. We are there to support and deter and advise.
We do QRA in countries where they do not have the ability to do it themselves (Baltics and Iceland).
This is all about working with the Romanians, enhancing their skills and if I was a cynic, selling the Typhoon weapon system…..

Could the Mig 21 still perform QRA duties against modern Russian aircraft ? Its a seriously old design. I cant imagine the UK still using the English Electric Lightning as its QRF model. Although I’ll admit to holding a mahoosive soft spot for that aircraft 🙂

Agree with the posts above the UK needs to increase its military numbers game. Typhoon has emerged after a huge amount of £ investment as the premiere multirole and air superiority aircraft in the world. We should harvest this reward (as the Germans are likely going to do with) a substantial new typhoon order. This has to be in addition to F35B which is replacing harrier sea Harriet, army close air support and deep strike roles provided by tornado. The MOD need to run up their flag on this and clearly and coherently state we need 56 more new typhoon… Read more »

(Chris H) Mr J Bell – I am with you most of the way Sir but can I gently point out that the F-35B is in no way replacing the Tornado. Typhoon post Project Centurion will take over that role next year. What the F-35 WILL do is ENABLE that deep strike role by the Typhoons by suppression of contested airspace and using specific sensor suites linked to the attacking Typhoons. You are totally right on the UK following up with more Typhoon orders to replace Tranche 1 airframes that are being refurbished out of store for QRA roles to… Read more »

(Chris H) – oops! Sorry about the repetition. Forgot to delete it.

I wonder how flexible the order for 138 F35’s is,perhaps a smaller batch can be ordered (say 72 F35b enough for the carriers) then use any funds saved and buy a top-up order for more Typhoons.I just cannot see us ordering the full quota of 138 F35 plus more Tyhoons on top of that,cynical as I might seem.

Hi RO_Observer Romanians have 1 Sqn of F-16 (more OCU than active Sqn). We said in press release that we are working with MiG-21 a/c who currently provide main force element and the bulk of QRA duties. David – old yes, but still important hence it is sublemented by NATO air policing mission. Remember, it’s not just the aircraft although that is the visible part it is the training and joint working that enables the Romanians to work interoperability with NATO. You will soon see Romanian aircraft providing air policing support to NATO in the Baltics, it won’t happen over… Read more »

So we send very expensive high end fighters and support Squadrons to defend the Eastern flank of the EU while they do sod all themselves because they don’t spend the bare minimum NATO requirements on their own defence and then act aggressively against us and attempt to do damage the internal structure of the UK in Brexit negotiations. Two words come to mind: Extracting Michael They need to be reminded that 80% of NATO funding will come from outside the EU after we leave. Its time for the UK to grow some serious attitude and tell the EU precisely whats… Read more » 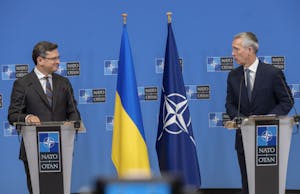