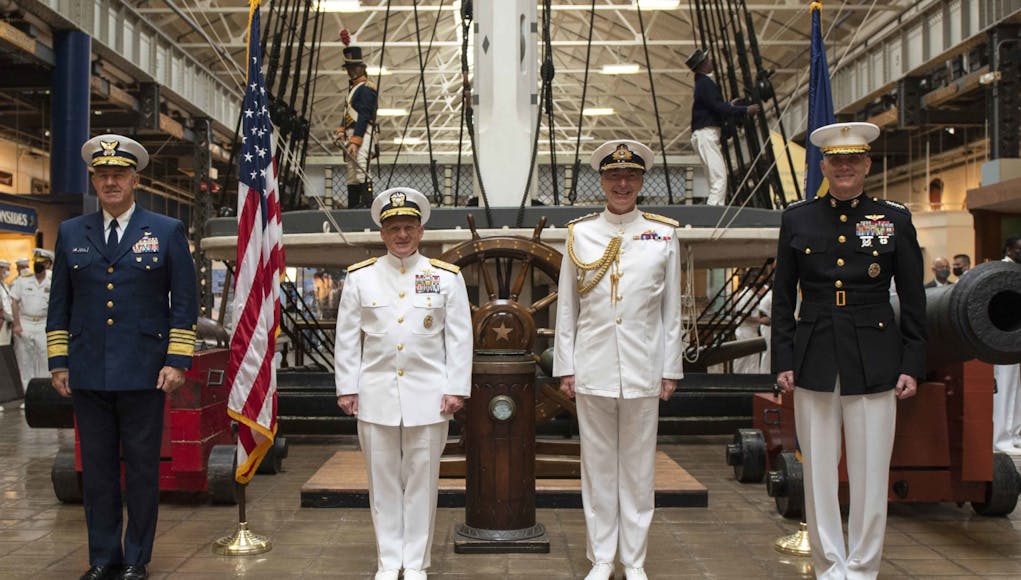 During the two-day visit that included a full honours ceremony and discussions between the UK delegation and senior U.S. Navy leadership, the two heads of Navy focused on expanding and strengthening maritime security efforts together.

“Our alliance with the U.K. is an anchor of peace and stability across the globe,” said Gilday.

“Underpinned by our shared history and commitment to a free and open maritime commons, our two navies will continue to sail together far into the future. By continuing to work closely with Admiral Radakin and the Royal Navy today, we will no doubt increase our interoperability for decades to come.”

“The links between our two nations are deep, and historic, but they aren’t just for the history books: they endure, and they develop. We enjoy close working relationships in the Middle East, where our headquarters are collocated; in the Caribbean we have had United States Coast Guard law enforcement detachments aboard our ships for many years, we have operated for decades in tandem in the Atlantic and we have a shared view on multilateralism and supporting the rules based international system.”

According to the U.S. Navy:

“The U.S. Navy and U.K. Royal Navy regularly operate together around the world, including the Atlantic, Arabian Gulf, and Indo-Pacific. Most recently, the Royal Navy announced April 26, that the HMS Queen Elizabeth (R08) Strike Group will deploy to visit more than 40 nations from the North Atlantic to the Western Pacific.

The Arleigh Burke-class guided-missile destroyer USS The Sullivans (DDG 68) will deploy as part of the strike group, along with a squadron of U.S. Marine Corps F-35s. The inclusion of U.S. forces in the strike group will improve expeditionary capabilities and interoperability between NATO allies, demonstrating the United States’ commitment to the NATO alliance.”

Not much the photographer could do. That photo was taken at the Washington Naval Yard Museum in front of a replica of the gun deck of the USS Constitution.

So is that from left to right USCG, USN, RN, USMC?