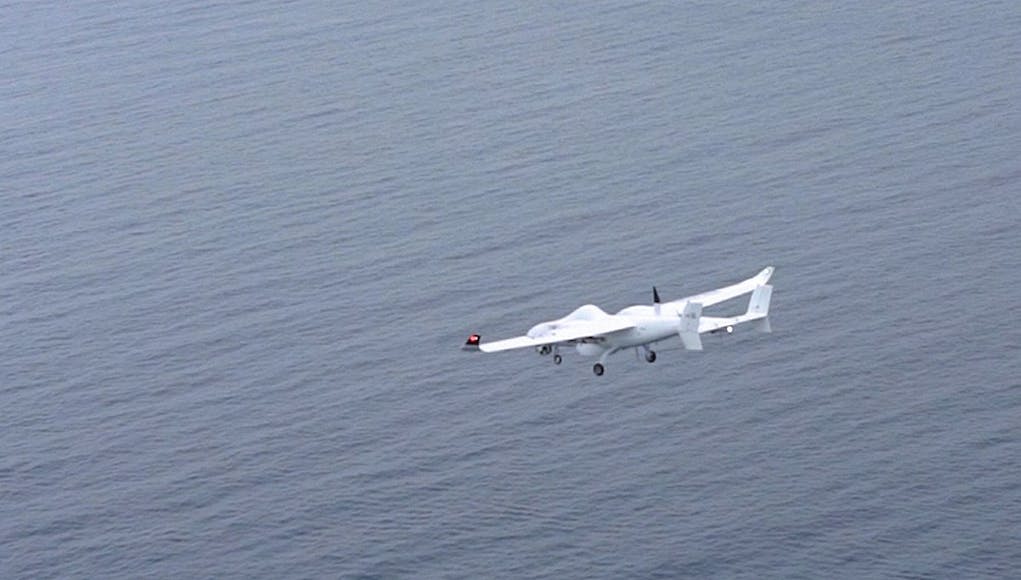 An AR-5 drone is operating over the English Channel on behalf of the UK Border Force.

The Home Office has previously said that it has access to aerial surveillance assets and that it works with partner agencies to make use of the available assets.

A spokesperson previously declined to comment on what company manufactures the drone based at Lydd, citing commercial sensitivities, however, CAA records show the unmanned aircraft flying with the tail number G-TEKV is the 7.3m x 4.0m AR5 model built by Tekever.

Last year, the BBC revealed that unmanned aircraft would be flying from Lydd Airport to monitor people attempting to cross the channel from France by boat.

The TEKEVER AR5 is a tactical UAS designed for medium and long-range maritime surveillance missions. Capable of carrying 50 kg in 20 hour missions, the AR5 features a wide range of sensor options and a multitide of features according to its manufacturer.

G-TEKV is registered to Tekever’s office in the University of Southampton’s Science Park.

You can read more about the drone here.

Sounds like a good bit of kit for this kind of work.

Well I.m a tad confused though, just what will it achieve ?

Will those people wanting to cross be able to track it’s location online?
And if so, will they wait for the coast to be clear? Or just use it’s predicted path so as to be be seen and get help crossing the rest of the way.
I think this won’t deter any illegal migrants but instead will spot those that run into trouble and potentially save their lives.
Death toll lower, illegal migrants in the country higher… is just one possibility I suppose.
[email protected]

People forget, we don’t usually and shouldn’t prosecute the immigrants themselves, we are actually using these to find and arrest those that take advantage of the most vulnerable, and are in charge of arranging these crossings. With these people gone, immigration will be safer, done less through illegal means (as they become less available and harder to carry out). Immigrants will be more likely to end their journey in the EU, seek legal passage Etc.

The immigrants themselves are hardly at fault.

Certainly not the immigrants fault at all.

What amazes me is how people can pass through 4-8 countries and not be allowed to get asylum in any of them. Said countries just pass them through and dont allow them to stop, as we can see with France very much encouraging people to pass through to England.

As far as i know Immigrants have the Legal Right to Claim Asylum in the First Country within the EU they arrive in,but they have specific destination in mind so they choose not to.

It’s so we can at least find and track these vessels coming over, and either send them back, or escort them to safety, or assist if they do get into difficulties and help save lives.

reckon ? And how do we send them back exactly ?

I don’t know, I don’t work for the boarder force. But at least we can track, and assist if they get into difficulties.

Yes, sending them back would be great if they are trying to enter illegally, and it would hopefully kill the trade of the real villains, the people smugglers, if it was known that anyone attempting a crossing would simply be sent back to their departure point. If that is not possible under law though then intercepting them seems to me to be the best option left. What are the alternatives? Leave them to drown? Frankly I’m not going to engage with anyone who prefers that option so we are then left with the other remaining option of letting them carry… Read more »

Under current Eu laws we cannot send them back, in theory we could try ‘block’ the boats coming over but that would endanger life.

Other than invading French waters is literally nothing can be done from our side.

Would it make sense to retask our Reapers to the border force once the RAF have replaced them with Protector?

Reaper isn’t certified to fly in EU airspace, and for good reason – in case the predictable reply of “stuff that, we’ve left the EU” was forthcoming. That is one of the major advantages of Protector over Reaper.

Operating in UK airspace they would only need a permit to fly from our CAA.

True, but my point was that some EU regulation is rooted in science and reason. The CAA is highly unlikely to want to certify anything that the EASA doesn’t want to certify. That is why Reapers are not physically based at Waddington. I believe that, specifically, the differences between Reaper and Protector are to do with resistance to lightning strikes and autonomous collision avoidance.

Hi Daniel, Agreed. If the issue with the Reapers is with their autonomous collision avoidance system not being good enough, there is absolutely no way the CAA will allow them to fly in UK airspace. We have some of the most crowded airspace in the world. I used to fly light aircraft and more than once saw an aircraft flying AWAY from me much closer than I was happy with! The CAA is very cautious and rightly so. In addition to light aircraft, there are military aircraft on training missions and even to occasional airliner avoiding French Air Traffic Control… Read more »

What happened to Hermes? its stuck in storage most of the time with no tasking!

I’m not sure, wasn’t it just a capability demonstrator for coastguard SAR?

Hermes has already been used. These are warfighting bits of equipment. Tracking immigrants in the channel does not require something that we would use in the middle east.

If watchkeeper isn’t currently deployed in the middle east and we supposedly have at least half of them sitting in storage it makes a lot of sense to sell them to the border service where they will at least see regular use.

I don’t think it’s as simple as selling military equipment to a civilian operator.

Schiebel S100. Get some and use them to this and also then can build them up on the rivers and ales where, can supposedly take LMM too. Coast guard use them in Wales why not here. Same radar or similar as hermes. https://www.bbc.co.uk/news/uk-wales-53600780

A bit bigger armed with a few missiles and this sort of thing could help in the rescue of Russian military assets which might break down in the channel.

The you tube promo from farnborough 2018 says it is fully marinised and can STOL from Carriers. RN looking?

Little confused haven’t uk forced spent millions on watch keeper or what ever was called? Why are we not using it?

Watchkeeper only flies in dedicated airspace in the UK. Either in the Aberporth range areas or in an area of SPTA cleared for the task.
I guess due to safety issues.