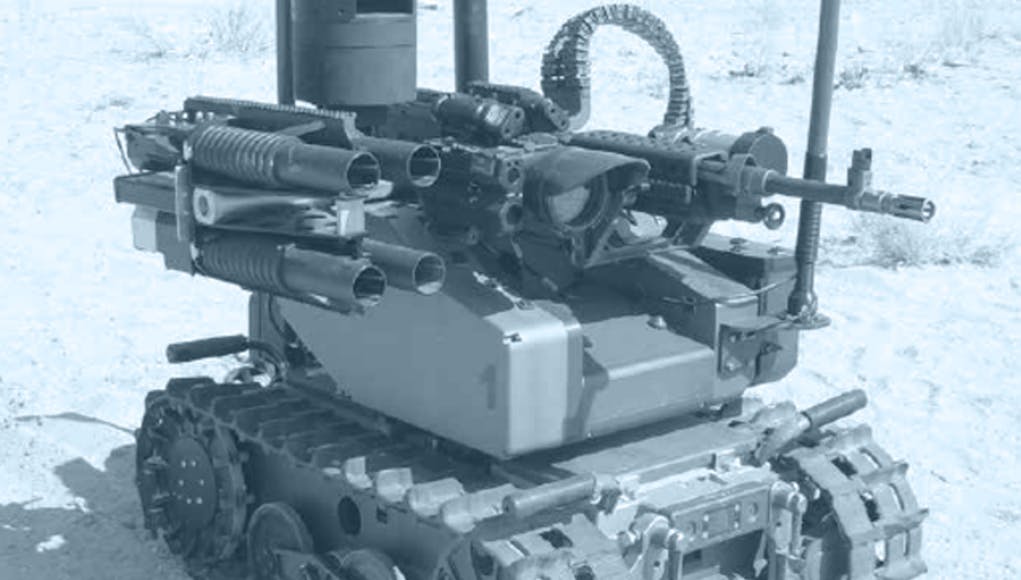 Lethal autonomous weapon systems use sensor suites and computer algorithms to independently identify a target and use an onboard weapon system to destroy a target without manual human control of the system.

“To ask the Secretary of State for Defence, what plans the Government has to develop systems that operate without human intervention in the weapon command and control chain.”

“The United Kingdom has no intention of developing systems which operate without any human intervention in the weapon command and control chain.”

“To ask the Secretary of State for Defence, what recent assessment he has made of the potential merits of supporting a ban on lethal autonomous weapons systems.”

“The UK considers the extant international legal framework on the development, assurance and deployment of military systems as sufficient.”

You can read more on lethal autonomous systems here.

Fair enough, but do they think the likes of China and Russia will let ethics get in the way?

They’ll avoid Ethics for a while…. at least until it comes out of lockdown.

Indeed. This is something that a lot of people seem to miss- that just because you decide to take the moral high ground doesn’t mean your adversaries will, if there’s an advantage to doing otherwise- which in this case there is.

A silly statement, a bit too Luddite for my thinking. In the world of weaponry, nothing but nothing, can be ruled out or we will be sunk by tyranny!

Slightly disingenuous, as the unmanned systems would be developed to do everything up to the moment of firing, at which point an human’s finger on the trigger would be required. To convert from that, to full autonomy, would just need a few lines of code inserted.

ChariotRider
Reply to  Bloke down the pub

That would be especially true if the system provided a recomendation! As far as I aware the UK has long required a human in the loop approach to weapons realise. I read somewhere years ago that the USN (I think the Ticos) could fire in a fully automatic manner with no human interaction. Not sure how true that was or what level of prior command input would be required, but given that there would have been very limited AI at that time would have definately have been a hot war scenario! I’m sure others have similar approaches. For the record,… Read more »

Sea Wolf was fully auto… Phalanx was fully auto Goalkeeper was fully auto. Human intervention is used to stop not start an engagement.
Waiting for a human input to decide to shoot or not is to slow. So instead you decide to not shoot.

Human intervention in the command and control system is therefore in place.

Yes, Gunbuster and I think the answer was quite precise. “No intention to develop ….” No denial of buying, fitting or deploying such weapons.

Yep. Not to mention ordinary, old fashioned mines and booby-traps.

Andy P
Reply to  Bloke down the pub

Aye just wait for Cyberdyne Systems to get their hands on it and Bob’s your Auntie’s live in lover… Skynet becomes self aware and we know what happens next. 😉

Must admit, its a ‘nothing’ story, the UK isn’t going to have killing machines that don’t have a human somewhere in the line to make the call.

James Fennell
Reply to  Bloke down the pub

Agreed. potential for man in the loop is essential to ensure RoE – but that does not mean autonomous systems will not be deployed.

The UK has no money to develop autonomous weapons – fixed it for you.

Isn’t the CIWS we have on ships, autonomous?

That’s defensive weapons though, not offensive.

And on a similar vein the active defence on armoured vehicles… Ultra close in defensive but a small step away from applying the same logic to a wider area scenario….threat detected and countermeasures are launched.

Also Phalanx is driven by the ship’s combat system, which has a man-in-the-loop ability to confirm targeting… its semantics really.

No doubt we will put fully autonomous weapons in the pile with all the actual war winning weapons from land mines and cluster bombs to sea mines. That pile being hope the Americans bring them because we want to pander to the Guardian readers.

Fully autonomous weapons play to the UK strengths we should not give them up because Stephen Hawking thinks they will lead to terminator.

“That pile being hope the Americans bring them because we want to pander to the Guardian readers.”
Guardian readers have no problem with any of those weapons or worse if is against “fascists” . Just look at Syria conflict

Let me think, well a stupid question to start with, first we have Phalanx a fully automated sytem. Then if I remember correctly Sea Viper has a full automation mode. So we have already fully automated systems. Should small robotic combat vehicles armed possibly with a mini gun have full automation for picket duties, scurmish lines, yeep. Sould there alway be a person in the loop, at the moment yes, but in ten years +- then I dont think so AI would have come on by then so far that possibly the human wont be needed. However this was a… Read more »

Mark B
Reply to  Ron

Ron
Reply to  Mark B

Mark B, all systems need to be switched on otherwise the sensors would not be active. I do get your point and I agree, but once a system is active the question then is, is the human in the loop for engagement or should the system work out the threat. That come down to programing and threat evaluation.

Phalanx is a defensive weapon to protect a vessel, that’s the difference.

Your missing the point. The point is it relies on a pre programmed algorythmn to calculate a threat and then use lethal force to engage it without human intervention.
I believe this is why it is turned off a lot of the time or at least that’s what they say when it fails to intercept an incoming anti ship missile.

Its turned off a lot of the time to save wear and tear. The original fit of Goalkeeper search radars rotated at 30 times a min. The rotating RF joint from the transmitter to the aerial would wear out if it was left on 24/7 so it only went on for testing drills and for real. It was eventually improved and became a lot more resilient with a massive improvement in MTBF. Such systems are not default in auto. You have to make a command decision to switch it to that mode. There are a lot of things to consider… Read more »

The Russians have been there for years with deadhand haven’t they?

Does that still exist?

It’s not talked about much these days as most old Warsaw pact nations removed it. However I understand the Russians and several close (former USSR nations) allies still have it. Although as a secondary system.
Like the Phalanx, turned off more than on me thinks.
However a rogue command from Phalanx would certainly be the lesser of the two evils.
Best not to think too much about the other!

From article I have read dead hand has been reactivated, but I take the tone of article as speculations more than hard fact. Not much use sorry Daniele

Thanks Ulya. Merry Christmas to you.

I thought Phalanx used autonomous algorithms to destroy incoming missiles which is probably why it is turned off so much.

How typically short sighted of a government minister. When hypersonic missiles become a reality there will be so little time between detection and impact that human responses will be too slow. Will our defence forces be left vulnerable just so that a minister can adopt a fashionable posture?

The statement pretty much describes Brimstone (certainly legacy) capability includes essentially the ability to find targets within a certain area (such as those near friendly forces), and to self-destruct if it is unable to find a target within the designated area. The missile’s advanced sensor package includes its extremely high frequency millimetric wave radar, which allows the weapon to image the target and hence choose a target location. With as many as twenty-four missiles in the air, the missile’s targeting system also required an algorithm to ensure that missiles hit their targets in a staggered order, rather than all simultaneously.… Read more »

where does a landmine sit in all of this. Plant and forget.

Or a sea mine.