The UK Space Agency and Rolls-Royce are joining forces for a study into how nuclear power technologies could be used as part of space exploration.

The UK Space Agency say that this new research contract will see planetary scientists work together to explore the game-changing potential of nuclear power as a more plentiful source of energy, capable of making possible deeper space exploration in the decades to come.

“Nuclear propulsion, which would involve channelling the immense energy released in splitting the atom to accelerate propellants, like hydrogen, at huge speeds, has the potential to revolutionise space travel. By some estimates, this kind of engine could be twice as efficient as the chemical engines that power our rockets today. Spacecraft powered by this kind of engine could, conceivably, make it to Mars in just three to four months – roughly half the time of the fastest possible trip in a spacecraft using the current chemical propulsion.”

Nuclear space power is anticipated to create new skilled jobs across the UK to support the burgeoning UK space economy.

“As we build back better from the pandemic, it is partnerships like this between business, industry and government that will help to create jobs and bring forward pioneering innovations that will advance UK spaceflight. Nuclear power presents transformative possibilities for space exploration and this innovative study with Rolls-Royce could help to propel our next generation of astronauts into space faster and for longer, significantly increasing our knowledge of the universe.”

“Space nuclear power and propulsion is a game-changing concept that could unlock future deep-space missions that take us to Mars and beyond. This study will help us understand the exciting potential of atomic-powered spacecraft, and whether this nascent technology could help us travel further and faster through space than ever before.”

“We are excited to be working with the UK Space Agency on this pioneering project to define future nuclear power technologies for space. We believe there is a real niche UK capability in this area and this initiative can build on the strong UK nuclear network and supply chain. We look forward to developing this and other exciting space projects in the future as we continue to develop the power to protect our planet, secure our world and explore our universe.”

The UK Space Agency add that developments in this field would not just mean a time saving – it would also radically reduce the dose of radiation taken on by astronauts that would be making future trips to Mars or other planets.

“The size of the dose increases the longer you spend in deep space, away from the bubble of protection given by the Earth’s magnetosphere. The appeal of a small nuclear power generator for propulsion also comes from the fact that power in space becomes increasingly precious with distance from the Sun. In the outer solar system, sunlight gets too dim for solar panels and other technologies like fuel cells are often too patchy as a source of energy.”

Nuclear propulsion is an idea that has existed since the 1950s, when the United States attempted to develop a rocket propelled by small atomic bombs tossed out the back. This time, it’s a little more refined. 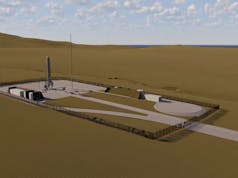 We should kick the ccp out from building our nuclear phase stations that dummy Theresa May signed us up to. Then we’re should invent in something like moltex, salt reactor technology.

Tend to concur, Moltex should be cheaper, distributed and intrinsically safer. Not to mention a British based company.

Tried to edit my previous comment to add something but it wouldn’t allow it.
Wanted to say Nuclear could only be used for in space propulsion, launching with nuclear is not viable for political, environmental reasons as well as it simply doesn’t have sufficient thrust to overcome gravity and reach orbit. In the US there are companies working on Fusion powered propulsion which while not being up to producing power on earth may well enable far higher specific impulse and even shorter journey times from orbit.

Thanks Shaun. I’ll go and have a read. Maybe it’ll cheer me up after having re-visited how we are getting on re progress towards ever getting commercial fusion power stations on Earth about 6 months ago. My conclusion from that was that there are so many hurdles still remaining that the possibility is effectively still out of sight; no point even trying to put a date on it. That’s what makes me so keen to see potentially smaller, cheaper and safer (compared to existing fission power) fission power technologies such as Moltex move on to decent scale demonstrator projects and… Read more »

On the fusion front another one of interest is http://www.lppfusion.com whether any of them come to fruition is still open but they seem to be making steady progress and don’t cost billions in research.
Agree regarding Moltex.

Definitely agree. And Moltex is primarily a U.K. company so very frustrating that it is Canadian investment enabling it to build its first commercial reactor in New Brunswick. The U.K. really should be investing in Moltex as a core technology so that a U.K. demonstrator project could get off the ground.

While I agree with the sentiment, I don’t think laying all of the blame at Theresa May’s door is fair; that deal will have been years in the making- she was just there when they signed it. She obviously bears part of the blame for putting her name to it, but so does every government minister and PM that helped it get there in the years preceding.

Oh yes indeed. Osborne and Cameron are just as, if not more guilty. The fact that Cameron allowed Xi Jinping a state visit, is digusting. Giving a communist dictator and genocidal maniac the red carpet treatment, is one of the most disgraceful acts of the modern age.

Yeah, I know there was a little bit in the late 90s and early 2000s when it appeared that China might democratise somewhat, but that had long since passed by the time of the nuclear deal. It was pretty apparent where things were going- especially to the government who I’m sure had better information than we did/do. I couldn’t agree more. The whole state visit thing is why I had a bit of difficulty with all the protests surrounding offering a state visit to Trump; compared to Xi Jinping or the Saudis, he’s just a divisive narcissist, rather than a… Read more »

Kinda seems like a field that has been researched to death. Exotic matter drives are what NASA’s Eagleworks are working on now, that is the only viable solution to interstellar manned flight

Back in 2004, NASA was pushing for JIMO (Jupiter Icy Moons Orbiter), a voyager type probe, but with a nuclear fission reactor powering a xenon gas thruster. The whole thing would have weighed 18 tons. It would have been much more flexible in its choice of targets, as it had the thrust that other probes lacked. It could have been the blueprint for KUBE (Kuiper Belt Explorer). Going beyond Pluto to planetoids like Sedna, Eris, etc.

The owners manual for the USS Enterprise is on sale at Amazon for just £17.50.

LOL. That made me laugh which with all the sh*t going on in the world right now is much appreciated.

The US did some early work under Project ORION that involved nuclear explosions under a ‘pusher plate’. Interestingly the idea was to launch from the ground with thousands of tons of payload capacity. However- NERVA was a much more recent project and more along the lines of what is presumably being contemplated here. NERVA envisaged a nuclear upper stage on a multistage rocket. The thrust wouldn’t be fantastic but the specific impulse would be much better than chemical rockets.