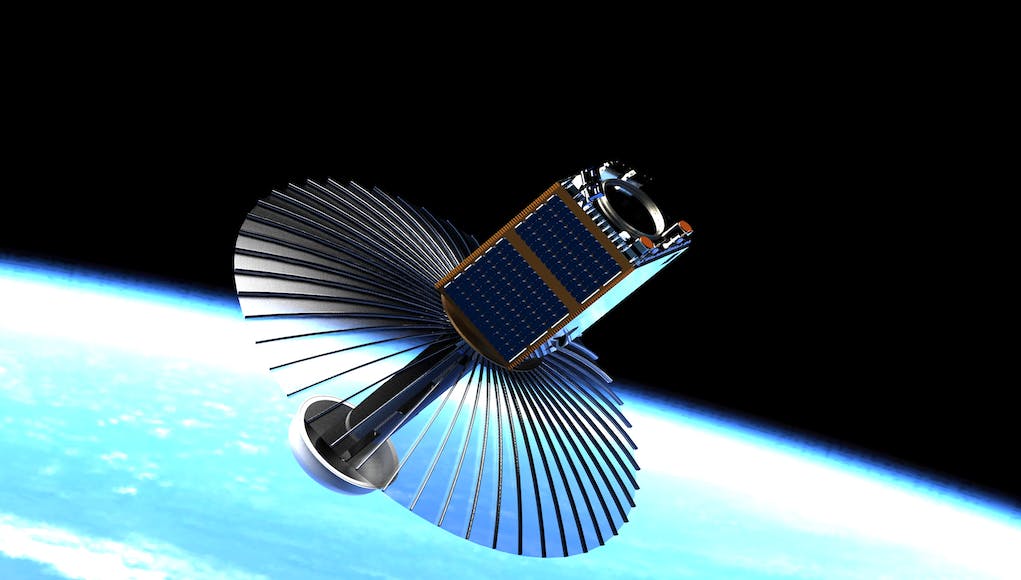 Compared to optical sensors, the any-time/region imaging, capability of SAR makes it ideal for surveillance missions, which can serve both national security and environmental monitoring applications.

At present, the UK relies heavily on the United States for this capability but coupled with the UK soon having its own launch capability, this announcement sets out a clear path for sovereign UK capability in this field.

The SAR payload will be exclusively developed in the UK say the firms and will comprise of a highly stowage-efficient deployable antenna from OSS and a high bandwidth radar instrument and RF system from SSTL.

Successful completion of the project will enable the OSS antenna to be flown on a future demonstration mission from SSTL targeted for a 2021 launch.

“Although an essential part of many geostationary telecoms satellites and likely to form a critical part of a large number of smaller Low Earth Orbit spacecraft, Europe currently does not have a flight-proven deployable antenna solution.

Existing deployable reflector antenna technologies tend to fold like an umbrella into a long cylindrical form which is not compatible with small launch envelopes and have significant structural challenges involved in supporting the cylindrical antenna during launch.

SSTL say it has been working on low-cost SAR mission solutions for many years and in 2018 launched NovaSAR-1, a 450kg low cost S-Band SAR technology demonstration mission which is acquiring SAR data for mission partners the UK Space Agency, Australia’s Commonwealth Scientific and Industrial Research Organisation, and the Indian Space Research Organisation.

We believe that there is a strong market for this new SAR payload, with a shift in the market towards small satellites in LEO constellations delivering increased revisit times and a demand for non-optical EO data or combined SAR/optical data.”

“This collaboration under UK Space Agency’s NSTP Flagship funding allows us to focus on maturing a variant of our ‘wrapped rib’ antenna toward on-orbit demonstration. We view this novel SAR payload as a key enabler for the next-generation of communications and SAR services from orbit.

The antenna is highly scalable and tunable and has been specifically designed for volume production, targeting smallsat constellations. As such, it’s suitable for a range of commercial opportunities not only here in the UK, but globally too.”

“Our National Space Technology Programme is all about supporting the development of space technology and skills to drive growth in the UK economy.

The funding to develop this innovative Synthetic Aperture Radar (SAR) payload will enable an exciting collaboration on new technology that will be developed here in the UK and will be of huge interest to customers in Europe and the rest of the world.”

Being involved with the US through the UKUSA agreement is great, but if we can contribute ourselves with our own space based assets then even better. At the moment we pay for the right to task some of their assets for a period of time.

Great news, I really hope we can get a Budget to fund a constellation of these. With so match commercial imagery available now their is little point in investing in optical satellites but an SAR network is a different story. It can even allow us to track foreign navies for a fraction of the cost of traditional MPA solutions.

however let’s just hope there is a Budget it fund it. Gavin seems to be in full on announcement mode at the moment and the extra 1 billion quid he secured won’t even cover the deficit.

651 AAC transfers to the RAF, because 5 Reg AAC is disbanding. The Gazelle is retiring early, meaning 655 AAC is also lost. They join the already quietly announced disbandment of 657 AAC ( A SF supporting unit ) and 1 Reg AAC will now only have 2 Wildcat Squadrons not 4. This results in around 400 posts cut from the AAC.

The AAC is withering away but hey ho we have the new Apache E and 34 Wildcats!!

Not good. IMHO, if it mostly flies above land and supports the Army its AAC (Chinook, Apache, Lynx, C130), and if it mostly flies above the sea and supports the RN its FAA (Merlin, Wildcat, F35b). So reduce the RAF to QRA Typhoon, Predator and C17, and not let them use £100k anti tank missiles dropped from £100m planes to hit soft targets 500 miles away.

I don’t agree with the carving up the RAF thing myself, but there you go, many posters have it in for them. Not me.

As for the second part of your reply I agree!!!

I suspect China will soon have all the drawings and spec, if they dont already.

how many old apaches and lynxs are those new apaches and wildcats replacing?
Also, I thought the Airbus H125M was slated as the replacement for the gazelles? or was that just a rumour?

I have seen the Oxford Space Systems technology and its brilliant in its simplicity. People bemoan the lack of industry in this country. Well our satellite industry is up there with the USA as a peer manufacturer. We manufacture satellites for both Russia, India and China – which work and for a protracted period longer than the requirement. The OSS and Surrey Satellite Centre have had 10 satellites launched in the last year ranging from the large SSTL S1-4 imaging satellites to the small research cubesats. All the satellites use the OSS deployable antenna boom which works a bit like… Read more »

Marvellous news despite Brexit. When do we hand over this wonderful example of British know how to the French?

SSTL is an Airbus subsidary since 2008.

Great to see the progress that the UK has made in this area. Just hope the funding for this type of programme doesn’t dry up….

Could a resident electronic whiz explain what this means is terms of capability? It is greater discrimination?

Could an electronics expert explain what this means in terms of capability> It is greater discrimination?