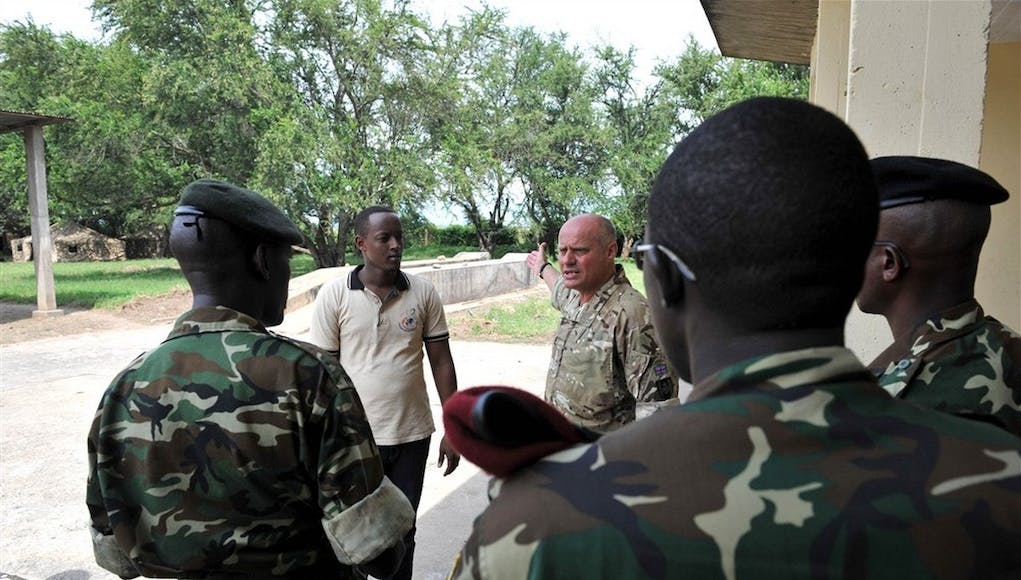 British personnel have now trained over 500 Somali National Army (SNA) officers at the Baidoa training centre in the south west of the country.

‘The training we have provided will help build a more stable and prosperous Somalia. The Somalian National Army have been motivated, keen to learn and professional and we remain committed to their country’s development’
Armed Forces Minister Mark Lancaster

The Ministry of Defence said that the long term plan was for Somali officers to ‘take what they have learned and become self-sufficient in training their own troops’.

The SNA reportedly consists of an estimated 20,000 soldiers, including 1,500 women. The recruitment of women has rapidly increased since 2011 when al-Shabaab withdrew from the capital Mogadishu.

However, Somalia is still deeply unstable place. 9 people were killed last month when 3 al-Shabaab rebels attacked the Interior Ministry in Mogadishu. In June, another attack saw the death of a US solider. Both events served to reinforce the importance of a strong Somalia National Army.

Just recently, U.S. Africa Command said they had carried out an airstrike in Somalia and killed 3 al-Shabaab rebels.

U.S. Conducts Airstrike in Support of the Federal Government of Somalia – https://t.co/HQBP5udVcw pic.twitter.com/aVAWMPiYn1

Before those troops take that training and use it against Western soldiers. It seems Africa in 1950s and 1960s wasn’t lesson enough in that respect.

Our political idiots do not care,it will not be them or theirs who will pay the price.

Somalia has changed after 3 decades of civil war. People had enough. Never did Somali troops shoot at Brits or Americans. They are fighting a Saudi/UAE sponsored terror group that wants to implant extremism that is not a Somali culture there. Terrorism was alien there it only started a decade ago there in the south. The north is a stable democracy. Somalia has Africa’s longest coastline and is located in the most strategic location and has oil and gas and many other natural resources including large amount of uranium and rare earth minerals and gold and the largest livestock In… Read more »

No thanks. Anyone going into Somalia long term or for anything other than terrorist/pirates clean up by air strikes and local militias has a screw loose. Whether it’s China, the USA, France, or Britain that place is 3rd from the bottom in the world. The only places worse are the Congo (on it’s 4th name since I was born) and North and South Sudan. Mogadishu was once a great city during the times of Ibn Battuta, Vasco De Gama and Leo Africanus. By the time Italy and Britain arrived in Somalia it was already trashed. Now it is just hell.… Read more »

This is what our future involvement in COIN around the world should look like. Wherever it is if the locals aren’t willing to fight extremists we can’t/shouldn’t do it for them.

British troops may face prosecution for actions in Iraq