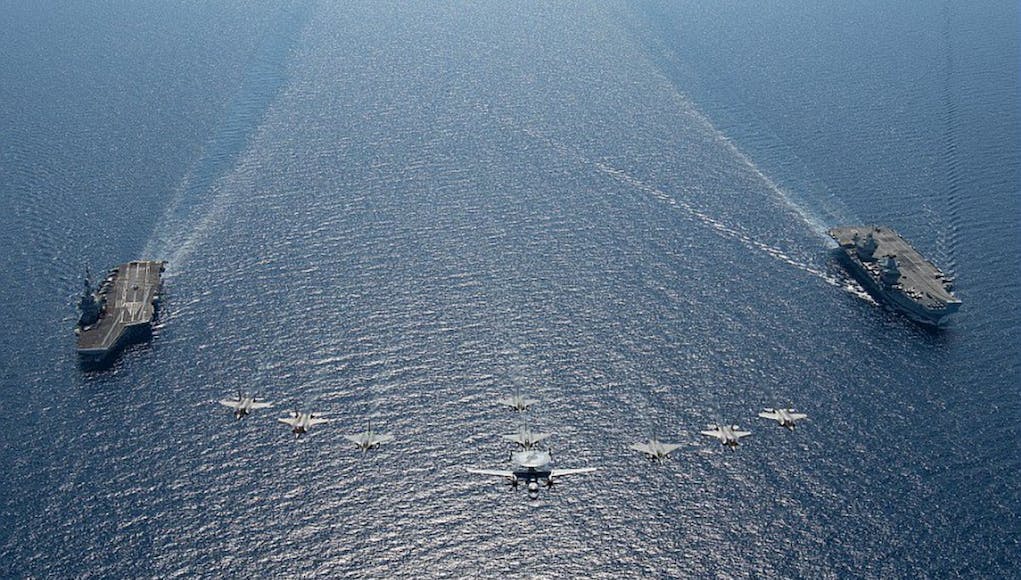 During the meeting, the three leaders signed a trilateral cooperation agreement reaffirming their commitment to deeper co-operation and interoperability around the globe— in both operations and exercises — “to meet the challenges of tomorrow and maintain a strategic advantage at sea”.

“Today, we reaffirm our commitment to uphold and advance a rules-based international system together that has underpinned our mutual security and prosperity,” said Gilday.

“Through continued engagement and dialogue, we are no doubt strengthening our forces’ collective ability to ensure access to waterways – and the economic prosperity that flows with it. There is much to celebrate in our trilateral relationship; indeed the whole is greater than the sum of its parts.”

The U.S. Navy, French Navy, and Royal Navy regularly operate together, including the on-going NATO exercise Steadfast Defender and Mine Countermeasures Exercise in the Arabian Gulf this past April.

“As we look to the horizon, we recognize that common challenges will only continue to increase in scale and complexity,” said Vandier.

“Our three naval services must be prepared to respond, together, in conflicts of varying intensity across the globe. Our trilateral training and exercise activities reflect this reality and ensure that we are able to operate together at the highest level.”

“Today’s Trilateral Meeting between the Marine Nationale, the United States Navy and Royal Navy: the three NATO nuclear nations, and three carrier navies in the alliance, highlights our shared commitment to NATO, and our bold steps towards ever greater interoperability and interchangeability,” said Radakin.

“The Royal Navy’s CSG21 deployment is a clear demonstration of this: a Royal Navy carrier, which will become the NATO carrier, supported by allied fighter jets, frigates and destroyers, working as one.”

This is mentioned to be Global

I think NATO as it stands is probably not going to be able to more overseas. It is largely an air and land orientated force with the exception of the Northern Seas and Arctic and most of the northern navies are committed to that area. No disrespect to Italy as they have a fine navy but it’s not capable much beyond the Med and the Gulf.
France and the U.K. have very similar capabilities and are Global.

“You had one job Pierre – sign on the line. Now we have to start all over again.”

BoJo to Macron. “We have 2 carriers and they are both bigger then yours” Macron replies “Yes you bafoon but we have adequate numbers of aircraft to launch from our carrier” That should generate a bit of debate on pros and cons of CDG vs QE design and programmes. I am glad we ended up with 2 ships though. Would have been a mistake to ever go down to just 1 carrier with limited availability. Like CDG. Great ship but has spent a long time in the yards having refit and repair giving her availability of <60% over the course… Read more »

Don’t think its a difficult argument.

Aircraft are a lot cheaper and quicker to acquire than Carriers and the F35 fleet can (will!) be grown incrementally. Training is also an issue – a lot easier to qualify/maintain skills for STOVL than CATOBAR, especially if you only have 60% Carrier availability.

I too like CDG and admire the French for trying to ‘do it properly’. But IMO their experience just shows its a bit beyond their means, and with a very similar economy/budget, therefore ours too.

Big surprise Merkel will continue to leech off other’s to protect Germany.