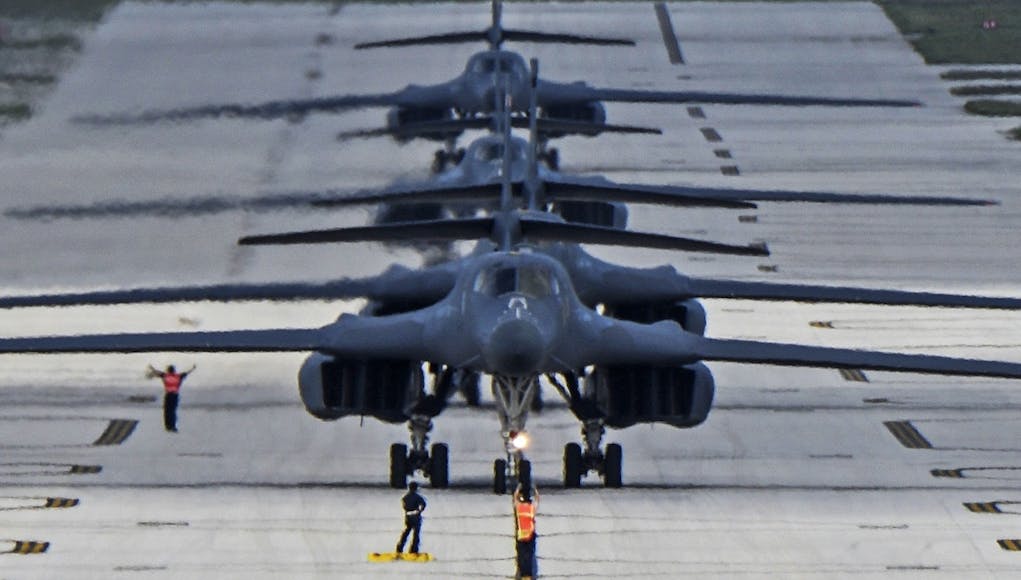 The US Air Force say that continuous bomber support operations over the last 20 years have taken a toll on the B-1 airframe structure due to “overuse in a manner not commensurate with its planned design”.

According to the US Air Force, currently, a portion of the B-1Bs are in a state that will require tens of millions of dollars per aircraft to get back to a status quo fleet in the short term until the B-21 Raider comes online.

As such, US Air Force officials proposed the retirement of 17 structurally deficient B-1Bs in 2021 so that maintenance dollars and manpower can be focused on the healthiest aircraft in the fleet.

“In addition, in coordination with our contractors, the Program Office, Combatant Command planners and our most advanced weapons’ school Airmen, the Air Force has changed various flight employment tactics of the remaining B-1Bs to preserve the longevity of the aircraft. These changes will significantly extend the life of the B-1B and reduce costs associated with potential structural repairs during the transition to the B-21.

The Air Force is not planning to close any B-1B squadrons, reduce major manpower pools or close any bomber bases. The reduction of B-1s from Ellsworth and Dyess Air Force Bases will be spread across both units.”

In addition, the US Air Force say in a news release that will maintain adequate B-1B capability through a heavy B-52 test period and initial B-21 buildup and that this is the start of the B-1B retirement which has been planned for some time, but sped up on the most deficient aircraft in the fleet.

An awesome piece of kit, looks like a fighter on steroids.

Always liked the B1.

Playing FF, how much would 6 ex USAF examples in good condition cost if we ever decided to regenerate minimal long range bomber capability.

I think the RAF would need all 17 to keep 4 to 6 in a combat condition.

I’ve also pondered on this. Or them working with P8s and the fleet for long range anti-shipping. An expensive way to do it though. Although not as expensive a use as the ‘B1 gunship’ idea that was floated last year.

Who would we use such an anti surface capability against? The Red fleet is gone and the few remaining Russian surface combatants pose little threat. The USA maybe needs such a capability in the Pacific but its a waste for us in the Atlantic. Better spending on more ASW.

Martin, you are correct mate. We, as a military force, don’t have a use for long range bombers anymore….if we want to use stand off ground attack weapons, we have submarine launched cruise missiles and the Typhoon and F-35B’s are both more than capable of carrying stand off weapons as well. Long range bombers are an expensive tool for a job easily done by other means, they’re also a luxury platform that are only for military superpowers and the only Country that has a decent fleet is the only real superpower on the planet……the United States. Russia’s long range bombers… Read more »

Paul T – Steve Naive said “most of them are unusable as they’ve been cannibalised to keep a handful of them flying”, which answers your point, so I’m not really sure why you bothered making it……

I would love to see the UK get in on the B-21 program.

I would really love to see the UK start a new Victor program!

Yes, I know I’m dreaming, but…

When you think that each B-21 will cost well over a billion quid each and a shed load of cash for some TLC after each flight, it shows us that they’re even more unaffordable than you think.
The V force bombers were actually very crude by design and had very old fashioned controls..as they were designed in an era without fly by wire technology. Even owning just a few fancy new bombers would be seriously damaging to the rest of the Armed Forces budget, the US can afford it……. sadly, we can’t.

I understand the cost would be prohibitive. Just playing “fantasy fleet”.

I would also expect a new Victor program would be an up to date modern aircraft, not a re-hash of a program first conceived in the 1940’s and an aircraft first flown in 1952.

I have always been a fan of British “4 engine heavies”, especially the “V Force”. Would love to see a modern equivalent.

if a minimal capability is required its probably better to buy B21 with more capability and lower through life maintenance requirements.

Big question is would the USA sell them to us.

We couldn’t afford them even if we wanted just two or three airframes, just their radar absorbing paint would cost tens of thousands of pounds to do and this would need to be redone regularly. They will also need to be kept in special, almost clinical climate controlled hangars which cost a bomb……no pun intended.

Agree that the B21 is pretty much out of reach for the Defence as it stands today but the Infrastructure (Hangars etc) is not a problem – it already exists.

Always liked the B1.

Playing FF, how much would 6 ex USAF examples in good condition cost if we ever decided to regenerate minimal long range bomber capability.

I wonder if there are any spare Airframes left at AMARC ,unless these have already been recycled into the Fleet to replace higher hours examples.

The B1 was designed for nuclear attack and let’s be honest bar practising for it it was pretty much a single task mission. As they had the nuclear tasking removed and became precision strike bomb trucks the flight hours skyrocketed and airframe fatigue increased. They where not designed to do day in day out long haul multi mission tasking circling over afgan ready to drop JDAMS when and where they where needed.. They have done it very well but now the USAF is paying for it in very poor availability, obselecence issues and worn out airframes. They do look bloody… Read more »

For the persistent long loitering CAS missions I’d be interested in the RAF acquiring some Harvest Hawk Plus kits for the C130J fleet. That would be cost effective way of increasing capability.

If I was going to make that decision, I’d go for a couple of the latest versions of the AC-130’s. I know they’re only useful in safe airspace and at night but they are astonishing!! It’s like having a flying arsenal and has probably saved thousands of lives over its operational history.

Yeah agreed, fantastic aircraft. Too bad we don’t have the cash. Tbh I appreciate even the Harvest Hawk kits are beyond our spending, but I just brought it up as it is a piece of kit that could greatly increase our CAS capability for not much extra cash spent, given it utilises the existing C130J fleet.

Agreed, acquiring some Harvest Hawk kits is an excellent idea, within our budget too.

Especially as the Herks are mainly Special forces assets anyway these days.

The obvious (and only affordable) choice for the UK regarding long range strike is paying to add the capability to the P8, along with boosting it’s numbers.

Wasn’t there a similar plan for the Nimrod fleet? I think around the early 2000s, when the USAF started using the B1Bs as high endurance bomb trucks over Afghanistan, there was talk about fitting a LITENING pod to the Nimrods and taking advantage of their long loiter and large bomb bay.

I can just about remember my only encounter with the B1 – I rode with a few other Motorcycles up to the RAF Mildenhall Airshow,must have been 89 or 90,spent a few hours there.Sods Law just as we were getting ready to leave a B1 did a low – level pass over the Runway,just about managed to see it.

The Mildenhall Air Fetes. Used to go every year such a shame they stopped.

I absolutely love the B-1B….it’s a fantastic looking machine, probably one of the best looking aircraft in history in my opinion, and even though it’s job title and role has been changed, it’s performed brilliantly at that job for years without a single loss of airframe in combat operations. What gets me is that the Pentagon is saying that some airframes are deteriorating through age basically, so they have to be scrapped but they overlook the age and usage of the truly ancient B-52’s. I think this is more likely to be a political decision, not a tactical one and… Read more »

The difference between the B-52 and the B-1 is that the B-52s were over engineered and can be upgraded far more easily than the B-1s. The B-52s are in far better shape than the B-1s and will be getting an engine upgrade with an RFP sometime this spring.
This is not a political decision but a management decision. The US Air Force can not afford four bombers – B-52, B-1, B-2, and B-21. Any realistic appraisal of mission and maintenance costs, as well as durability would indicate the B-1 and the B-2 would be sent to the bone yard.

Let’s buy some for the raf.

My favourite bomber, it looks great and still looks modern and like it was built yesterday. Are some still based at Diego Garcia British territory?

I’m not sure any bombers are permanently based at Diego Garcia, the United States generally moves tactical strike aircraft there when they’re going to hit someone. There’s mainly support units with varying tasks, intelligence gathering permanently based there and also similar Naval units as well. It’s more of a place to launch attacks from when needed really.