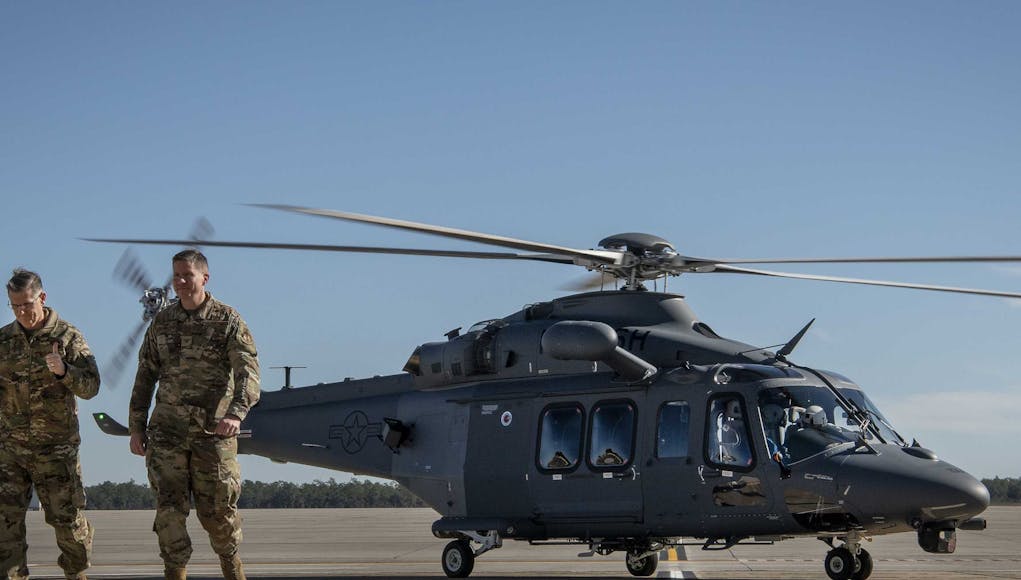 The US Air Force Global Strike Command named the MH-139A helicopter ‘Grey Wolf’ during a naming ceremony held this week.

According to a release from the force, General Timothy Ray made the announcement, comparing it to the wild animal that bears the same name.

The Grey Wolf is reportedly the first major acquisition for the command in its 10-year history. The name Grey Wolf is derived from the wild species that roams the northern tier of North America, which also encompasses the intercontinental ballistic missile bases in AFGSC.

“It strikes fear in the hearts of many,” Ray said.

“Its range is absolutely inherent to the ICBM fields we have. As they hunt as a pack, they attack as one, they bring the force of many. That’s exactly how you need to approach the nuclear security mission.”

The helicopters will provide security and support for the nation’s ICBM fields which span Wyoming, Montana, North Dakota, Colorado and Nebraska.

The US Air Force say that the new helicopter closes the capability gaps of the UH-1N Huey in the areas of speed, range, endurance, payload and survivability in support of the command’s ICBM missions. Other mission capabilities include civil search and rescue, airlift support, National Capital Region missions, as well as survival school and test support.

“The roll out of the new helicopter demonstrates an asset providing ICBM security in support of U.S. Strategic Command’s nuclear deterrence operations aligned with the National Defense Strategy.

The acquisition was contracted through Boeing during a full and open competition at a cost of $2.38 billion for up to 84 aircraft–$1.7 billion under budget. It is the command’s first commercial “off-the-shelf” purchase, adding military-unique modifications.”

The US Air Force will procure up to 84 MH-139A Grey Wolf helicopters, training devices and associated support equipment from Boeing.

The Grey Wolf will replace the UH-1N, which entered the US Air Force in 1970.

Looks kind of like the Augusta Westland aw 139, could that replace the puma?

It is an AW-139, but but built by Boeing in Philadelphia. Boeing and Agusta have a long history of building each others designs.

It is being built by Leonardo at their Philadelphia plant to Civilian spec then being handed over complete to Boeing for military conversion.

“Boeing and Agusta have a long history of building each others designs.”

The association was more with Bell

It would need to be a little bigger. The AW-149 would make more sense as a replacement.

Colour me cynical about the back story of why they called it “Grey Wolf”, I suspect they just thought it was cool.

Doing their best to kill off the Grey wolf in those States so probably very appropriate a name for a helicopter enabling weapons that if ever used will be doing the same job for humankind.

That was in the past. Although ranchers in the region still blame them for – everything associated with livestock loss – not really true. They have been successfully reintroduced to the point where a few hunting permits are issued to thin the population out of necessity. They’ve started to pop up much further South as well into territory they haven’t occupied in a century. Just give Mother Nature half a chance and she’ll heal herself.

I think it has to do with the fact it’s going to be operating in the Northern Tier states of the U.S. where the missile fields are located – Montana, Wyoming, N and S Dakota etc. The Grey Wolf is associated with those states since that’s where the vast majority have their habitat.

So close to calling it Airwolf but then again it’d have to go everywhere with that themetune blaring out which would kind of ruin the stealth a bit.

The tune playing would make the enemy shit their pants though! A helicopter that can take on an Army and win.

I see your Air Wolf and raise you…. the tune that would really put the bejezus up folk with a bunch of paraffin parrots going at them. It has to be Ride of the Valkeries. Especially if they don’t surf.

Grey Wolf…’they hunt in packs and strike fear into the hearts of many’. Pretentious Hollywood bullshit!

Sounds like a line from a particularly bad Michael Bay movie!

9 submarines one week, 80+ helicopters the next.

84 Aircraft for just security and support of one capability! Damn we could only dream.

Yeh, they’re spending more on the these helos than we are on the T31 programme, if I’ve my currency conversion right.

Well good luck to the US of A. Admittedly the UK doesn’t need such – having no land based ICBM’s to protect so we have a saving….better inform Treasury LOL.
The US spends north of 3% GDP too. We could do better – my place to look for savings would be in education. Modern education is IMHO appallingly wasteful and inefficent – chalk and talk schooling cheap and actually worked!

Instead of education, just cut military benefits inline with commercial terms, probably saving 1bn a year. Open both the delivery, execution of services and force projection to commercial entities. This would make enough savings.

I was pleased to hear that you no longer had to walk 10k miles as plod before you could become a senior police officer. That’s not to say there is no place for operational experience, it’s just not the full picture. The legacy organisational culture of many of our state functions is more of a union/religion than a focussed business.

Problem is that doesnt help when kids need to be computer savvy these days. Anyone who doesnt know how to use a computer now and in the future is going to be very , very limited in life. My girlfriend’s friend cant use a computer at age 36 and means she basically cant apply for jobs apart from crap factory ones. We need to invest more, in education terms, in the STEM subjects- science, technology, engineering and maths. Reinvigorate our non-service industries. Also, from a defence viewpoint, it’s only going to become more computerised and high tech, from cyber defence… Read more »

Steve R. I understand what you are saying but I admit I beg to differ somewhat. PC skills are a means not an end. I was exposed to mainframe computers in my mid- late twenties. Not so difficult to pick up, and to desktop PC’s in my early thirties. Again no prior – you dont need to be an Einstein to use a PC. What I did have was an analytical mindset. As for PC’s in education – they are not a substitute for the three RRR’s or cultivating good planning and analytical skills. Furthermore evidence shows this. Australia may… Read more »

You’re right in that PCs in education are not a substitute for the 3Rs, but they are not supposed to be. The Three Rs are supposed to be the basic staple of education, but computers are a fact of life, everything is becoming more computerised and things previously done offline or on paper are now done online. Whereas the Three Rs are the basic staple of education, there are basic staples of computing that every child in the UK should know: emails, basic internet navigation, Word and Excel. The cold fact is that anyone now who doesn’t know how to… Read more »

So what is wrong with this as a Puma replacement?

I have read both for and against on UKDJ over the years.

The AW149 makes more sense as a Puma replacement.

It would seem to be all gloom and doom in Pompey according to this stem article from the Times!

Andy it is not as simple as that. First, and being picky but it is relevant, they are Rear Admirals, not Admirals. 2 Star not 4. Secondly, and I have not counted them but maybe your are right and there are 37 “Admirals” Those positions are throughout defence, not purely fleet. Third. An organisation such as the Armed Forces and the MoD behind it has literally hundreds of organisations and directorates that require a responsible owner/leader of a certain rank. That is reality. Many are headed by Civil Service posts, many are not. A military does not run itself. Putting… Read more »

Correcting myself, having got home to check – Two Vice Admirals, not one. 2SL and Fleet Commander, both 3 Star. 1SL who is the Admiral is more often than not at MoD MB and elsewhere.

Indeed, I jumped to the conclusion these were Fleet.

The Times seems to be running hard with these defence cuts stories. Probably the paper to watch in the coming months….especially if Max Hastings is writing for them!