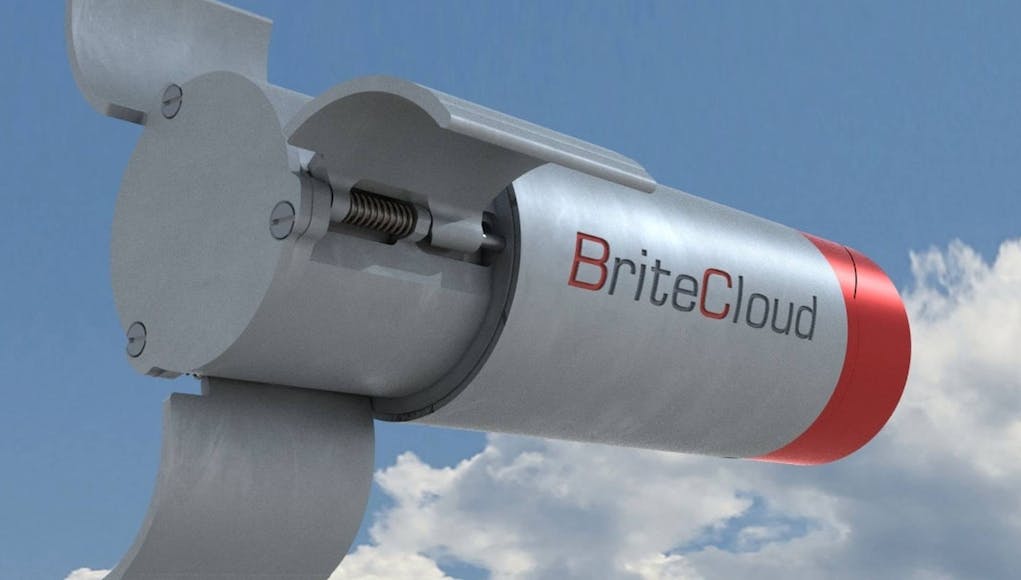 Leonardo has announced that the United States Department of Defense has selected its BriteCloud expendable active decoy (EAD) to be evaluated under the US Foreign Comparative Testing (FCT) programme.

The mission of the FCT programme is to find, evaluate and field products and technologies produced by US allies, such as the UK, where these products have a high technology readiness level in order to satisfy valid defence requirements more quickly and economically.

The Air National Guard (ANG) will lead this FCT by evaluating BriteCloud as it is launched from countermeasure dispensers installed on US Air Force ANG aircraft, say the firm.

“During the trials, ANG F-16 jets will dispense BriteCloud rounds, demonstrating the ability to enhance F-16 survivability. BriteCloud will be tested in a variety of challenging scenarios to provide a high level of confidence in the performance of the system.”

BriteCloud is a compact, self-contained radio-frequency (RF) countermeasure system that is launched by a combat aircraft pilot to defeat attacks from radar-guided missiles.

“Effective against the latest and most-advanced radar-guided threat systems, BriteCloud provides an extra layer of survivability for pilots. By completely separating from its host aircraft and falling away, the decoy improves aircraft survivability by guiding the incoming missile away from the aircraft”, according to Leonardo.

First deliveries of BriteCloud by Leonardo to the RAF went into service on-board UK Royal Air Force Tornado jets in April 2018. In late 2017, following extensive testing, the MoD approved the BriteCloud 55 (named for its compatibility with 55mm flare dispensers such as those on Tornado, Typhoon and Gripen aircraft) for operations and production.

I think they are already on all our fast jet aircraft, it’s an amazing piece of kit but it’s greatest feet is that it fits into the standard chaff launchers which means it’s easy to integrate onto any NATO aircraft.

Helicopters are unlikely to face an RF tracking missile threat so it’s probably not as relevant for them to justify the cost.

We’re going to need something to keep our aircraft safe in the future that’s for sure.

As impressive (or frightening) as that seems don’t forget that when you add up the Naval Forces of the rest of South East Asia plus the US,UK,Canada etc there is a balance of sorts.For any notion of the Royal Navy standing up to the Chinese on its own would be pure madness in my opinion.

There will also be Type 55s and some of their other destroyers are at least equivalent to late-Cold War Soviet designs… plus upgrades. The growing PLAN Navy is really no joke.

They do say that quantity has its own quality value. However, with the speed that China is putting these more modern vessels together. You have to wonder what corners they have cut to get the hull numbers so quickly? I would suspect they have very poor battle damage management. The other issue they have is getting large reliable gas turbines for their ships. Most of their legacy Navy still use steam turbines, so will be acoustically very noisy, easy prey for an Astute etc.

Sadly, we cannot rely upon other nations to support us when the going gets tough!

Not true, helicopters show up like a flashing beacon when illuminated with a 4th gen look-down pulse doppler radar. With a modern AESA radar you can even tell what type of helicopter it is by measuring the differences between the advancing and retreating main rotor blades doppler shift. If a helicopter has a fenestron style of tail rotor, this is also very easy to detect as it rotates at a constant speed and is generally 90 degrees to the airframe. The Commanche got round this problem by using composites fenestron blades. All our helicopters carry radar warning receivers and do… Read more »

Seems like a nice bit of kit but like every other high tech piece of kit you never know how it will really perform till u use it in combat. The towed decoys that have been in use for at least 10 years have seen combat and from the reports online I’ve seen have done very well. Guess time will tell whether this new device will live up to the hype.

DON’T SEE WHY THERE’S HYPE AROUND WHAT IS,another variation of whats already in service, it doesn’t say why its better

The Britecloud uses a new form of RF technology called Digital Radio Frequency Memory. This basically takes a digital real time recording of the threat radar. Now that the signal has been digitised it can have various techniques done to it. Therefore, you can manipulate the signal so that you can re-transmit it at a higher power, this fools the threat radar into thinking the aircraft is closer or is a larger target. You can do a timed phase change to the signal, this fools the radar into thinking you’re at a different position or there’s more than one of… Read more »

This isn’t replacing the Towed Decoys.
It’s in addition to them. Both Typhoon and F-35B will have towed decoys as standard and Britecloud.