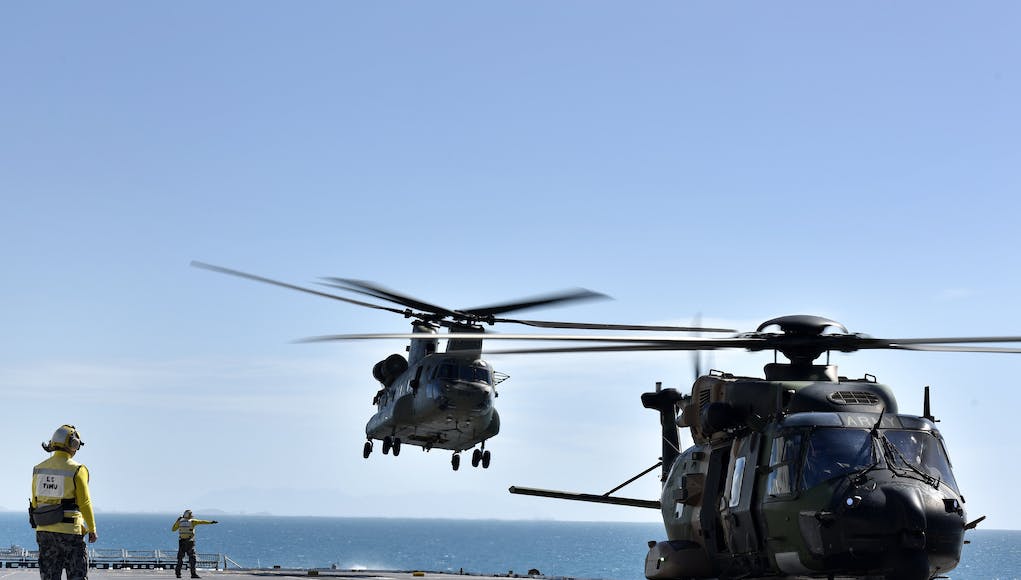 The Australian Defence Force brought a group of US Marines onto HMAS Canberra to take part in an amphibious raiding training.

“Sea Horizon, the first one, was just a small command element going over command procedures.”

The second part, Sea Horizon, consisted of the headquarters element testing wet and dry embarkations. They culminated with Sea Raider where the ATG employed a battalion size element, support element and recon teams in an amphibious certification process, MacDougal said.

“They developed the intelligence picture and assisted current operations of our landing forces during the exercise.”

Three weeks into the exercise, HMAS Canberra arrived in Brisbane to embark vehicles, infantry units and the rest of the supplies needed. It marked the start of the second part, Exercise Sea Explorer.

“Sea Explorer is where the Australians start to build muscle memory for going to the beaches and moving around on the ship,” said U.S. Marine Master Sgt. Kwame Williams, embarkations and operations chief from Combat Logistics Detachment 1.

“Much like the Marine Corps, the infantry units will train on the amphibious tactics so when it’s time for the final exercise, they can hopefully roll right through it.”

The ADF completed many firsts during the exercise.

“This was the first rotational battle group to conduct amphibious operations as part of an Amphibious Readiness Unit,” MacDougal said. “It was also the first time we had air to surface movements from the LHD and LSD to land objectives during any exercise.”

In addition to air to surface movements, this was Australia’s largest embarked amphibious element since the Vietnam War, with more than 1,700 sailors, soldiers and airmen involved according to a press release.

Just a little something which I feel could have helped the above article: HMAS Canberra is the lead ship of the two ship Canberra class Amphibious Assault Ships otherwise known as a Landing Helicopter Dock (LHD). Based on the Buque de Proyección Estratégica (Strategic Projection Ship) design by Spanish shipbuilders Navantia. At 27,000 tonnes, the LHDs are the largest ships ever constructed for the Royal Australian Navy (RAN) and are being built by contractors BAE Systems Australia and Navantia. The ships will provide the Australian Defence Force (ADF) with one of the most capable and sophisticated air-land-sea amphibious deployment systems… Read more »

Future of allied warfare will see increasing cooperation of this kind – joint USN / RN CSGs, USN / RAN ESGs, and USN / JMSDF ASW / BMD SAGs etc. Serious force multiplier by drawing on the expertise and assets of one to complement the other. Another example would be USN surface ASW assets driving enemy SSNs and SSKs into the tender mercies of Astutes awaiting in “HMS Ambush”… 😀

I should have clarified that I meant out of NATO operations and ever increasing seamless cooperation with our closest circle of allies.

Hey can we have a go to Australia. Stop hogging all your toys.

China’s Navy is growing at a rapid pace.
Four new destroyers built in just over a year!
http://www.janes.com/article/81499/china-launches-two-type-055-destroyers-simultaneously-in-dalian

This times two when HMAS Adelaide and HMAS Canberra come together:

Plus a few of these

Throw in a couple of ARH Tigers for good measure