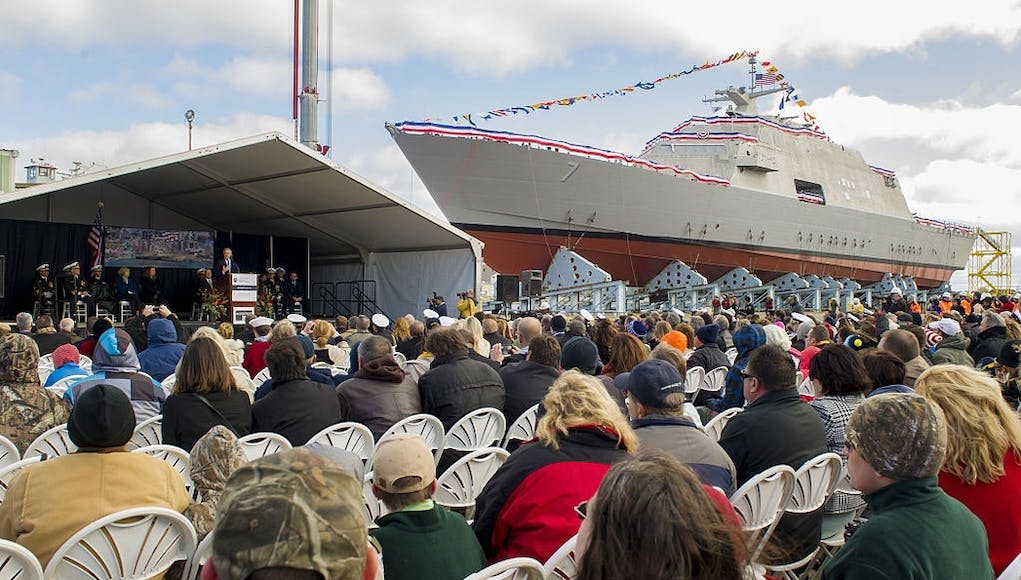 The US Navy have commissioned the seventh Littoral Combat Ship, the USS Detroit.

“The entire Lockheed Martin-led LCS team is honored to have delivered USS Detroit and witness the ship being commissioned and brought to life in her namesake city.

For decades to come, USS Detroit will serve in the defense of our great nation, enabling the US Navy to carry out its missions around the world and representing our nation where and when needed.”

The Lockheed Martin-led industry team is currently in full-rate production of the Freedom-variant, with six ships under construction at Fincantieri Marinette Marine and three more in long-lead material procurement.

A 2012 report by Rear Admiral Samuel Perez, USN, found that the ships lacked the manpower and firepower to complete the missions required by regional combatant commanders. The report found that the LCS is “ill-suited for combat operations against anything but” small, fast boats not armed with anti-ship missiles. It also found that the excessive beam of the trimaran Independence class ships may pose a “navigational challenge in narrow waterways and tight harbors”.

The report also found that the contractor-based maintenance scheme for the ships had led to poorly supervised and unaccountable contractors leaving problems unresolved. As contract workers are required to be American, they must be flown out to any foreign ports visited by an LCS. A special panel was appointed to investigate “challenges identified”. Twenty more bunks were installed to allow for a larger crew.

Well, the Americans do have Thanksgiving in about a month so I suppose it is appropriate to be commissioning turkeys round about now. A cheap shot I know, and as one of our best allies I certainly don’t wish the USA ill, but it is vaguely reassuring that it’s not only in the UK where defence projects can go horribly wrong with huge price tags delivering far less capability than one would have hoped for.

Maybe you are right for the LCS tasks the US Navy want them for, I don’t really know, but the more I look at this ship and its specification I do think the MoD and Royal Navy should be looking at this design for the new Type 31 Frigate. After all it does actually exist. It displaces 3,900 Te. Powered by 2 X RR MT30 Gas Turbines and 4 X RR Water Jet system. Top speed 45 Kn. Has a BAE Systems Mk 110 57mm gun. Hangar / Flight Deck space for a Merlin sized Helo and drones. Length: 378 ft… Read more »