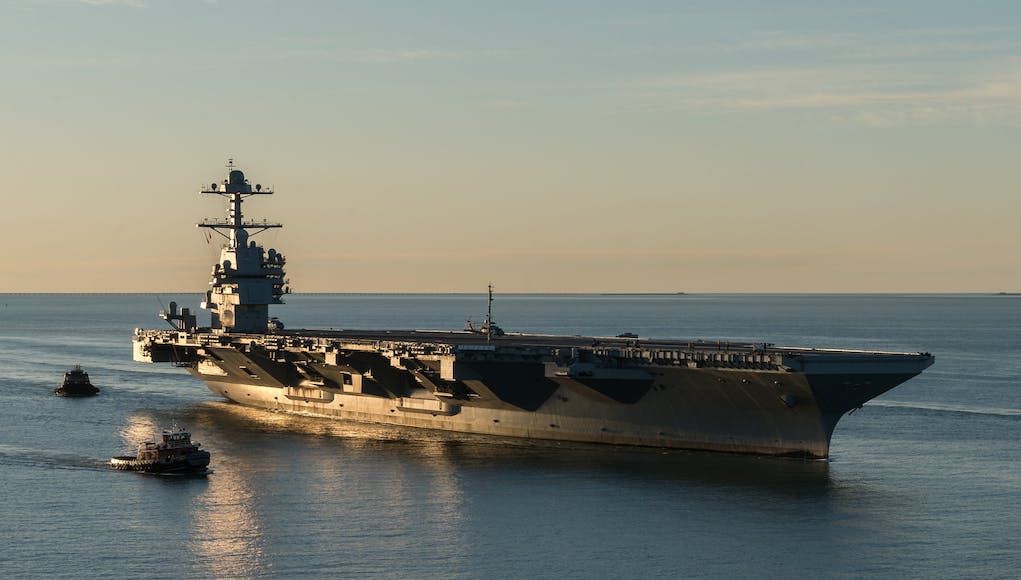 The US Navy has accepted delivery of the future USS Gerald R. Ford.

In July 2016, a memo was obtained by CNN from Michael Gilmore, the US Department of Defense Director of Operational Testing and Evaluation indicating that problems with four major flight systems would further delay combat readiness of the ship. The ship was originally expected to be delivered in November 2016 and these issues further delayed that goal.

“Congratulations to everyone who has helped bring CVN 78 to this historic milestone.

Over the last several years, thousands of people have had a hand in delivering Ford to the Navy — designing, building and testing the Navy’s newest, most capable, most advanced warship. Without a doubt, we would not be here without the hard work and dedication of those from the program office, our engineering teams and those who performed and oversaw construction of this incredible warship.

It is because of them that Ford performed so well during acceptance trials, as noted by the Navy’s Board of Inspection and Survey.”

Ford is the lead ship of its class and the first new-design aircraft carrier delivered to the US Navy since USS Nimitz in 1975.

“The next generation of aircraft carrier, the Gerald R. Ford class delivers unprecedented flexibility to the fleet. Due to a larger flight deck, the ability to host more aircraft, additional weapons and aviation fuel storage, and the Electromagnetic Aircraft Launch System and Advanced Arresting Gear, Ford will be able to increase sortie rates by one-third when compared to the Nimitz class. Further, the Navy’s newest aircraft carrier generates three times the amount of electricity as previous classes and is designed to rapidly add capabilities as new systems become available over the course of its projected 50-year service life.”

Ford will be commissioned into the fleet this summer, formally placing the ship into active service. The supercarrier is expected to be operational in 2020 following achievement of initial operational capability.

“able to increase sortie rates by one-third when compared to the Nimitz class” – that’s a bigger capability upgrade than I expected.

Does anyone know the sortie rates for QEC, Nimitz and Ford? (I guess only the first two are really needed since if we know Nimitz’s we can work out Ford’s on the basis of the quote above).

It’s funny really, there are people criticising the Gerald R. Ford, have been and will be. But she is a major status symbol, and that is important where image means force.

Still, criticism should always be welcome as sometimes it might be right.

The elephant in the Ford messroom is the fact this thing has cost $16 Bn and counting. To put that into perspective we (will) have built two QE Class carriers for some $10 Bn (depending on rate of exchange). Or put another way if we had $16 Bn to buy carriers we could now have three! And our three combined crews of those ships would be about the same as one Ford Class and be capable of delivering twice as many aircraft. From what I can find the QE will have an initial sortie rate faster than a Nimitz because… Read more »

A huge part of that is R&D.

The current adjusted cost of building a new Nimitz would be $9.5bn according to the US navy.

The Ford class will be better value overall considering there will be 700+ fewer crew to pay for over 50 years and the vessels will require less maintenance and be able to generate more deployments through its lifespan.

We here about the QE class sortie rate a lot, especially around why it was built so large.

What they never seem to mention is what assumptions the sortie rate is based on, specifically around number of jets involved.

We know that practically we will probably never have more than maybe 24 jets on the carrier, so is the high sortie rate based on that number of the theoretical 40 odd that it can carry if we had the planes.

Good point Steve sortie rate is dependent upon the number of F35bs if QE is only carrying 24 then the sortie rate for the embarked air wing is going to be around 100/ 24hr time period. So 2/3 the nimitz class but if upto 36-48 F35bs i think the QE will be comparable to a Nimitz with 150-200 sorties per 24 hour time period. aWe need some clarification from the MOD on what is going to happen after 2023 when LRIP of the f35bs is completed and we have the known 48 jets in service. Are we going to get… Read more »

Sortie rate does stop being proportional to number of aircraft at some point and in overload can even decay with extra aircraft when the carrier becomes too overloaded. My understanding is that QEC has been optimised for optimum sortie rates up to about 36 or maybe 40 F-35B and beyond that the returns for each extra airframe diminish and ultimately become negative. Issues such as moving aircraft around, refueling and getting munitions up from storage are all limiting factors that need to be considered and, as I understand it, have been considered very carefully and benefit somewhat from the clean-sheet… Read more »

Thee QEC was designed to have a sortie rate for the F35B of 75 per day sustainable for a 5 day period.

The question is how many jets are needed to achieve this and do we need usmc to help out.

Hey Steve. I think that figure was based on the assumption she would have 36 F-35Bs aboard. If she has 24 it will come down somewhat. 617 squadron stands up in 2019 then 809 NAS in 2023. Until then we wont be able to put 24 aboard never mind 36. So some USMC airframes would be very welcome. There are another 2 as yet unnamed squadrons due to stand up in the late 2020s as deliveries crank up. thats the point we can fill her up on our own (hopefully).

Given most images of the QEC have 16 F35b’s on deck and I believe can tak 60 under deck at surge the problem isn’t one of maximum rate, but one of CSB th UK afford to have a fully kitted out carrier. The USN may well have 10 carriers but only 2-4 are normally available and even the US are struggling with asset availability. The UK needs a force of 8 Sqdn (of 16) F35 for operational needs and not the overall order total (which needs to be closer to 200) over the life cycle. 48 is nothing and even… Read more »

Agree Paceman. Need some advanced UAVs to supplement the manned jets. Post election we will need clarification on what the RAF and fleet air arm can expect to end up with in terms of total numbers of F35Bs. An in force number of circa 120-130 is very much needed with a commitment to say 200-225 aircraft over the life of the programme. I am utterly against any talk of moving away from the B version and having a mixed force of Bs and As. That would be highly wasteful in terms of spare parts, servicing, engineer training, repairs etc. The… Read more »