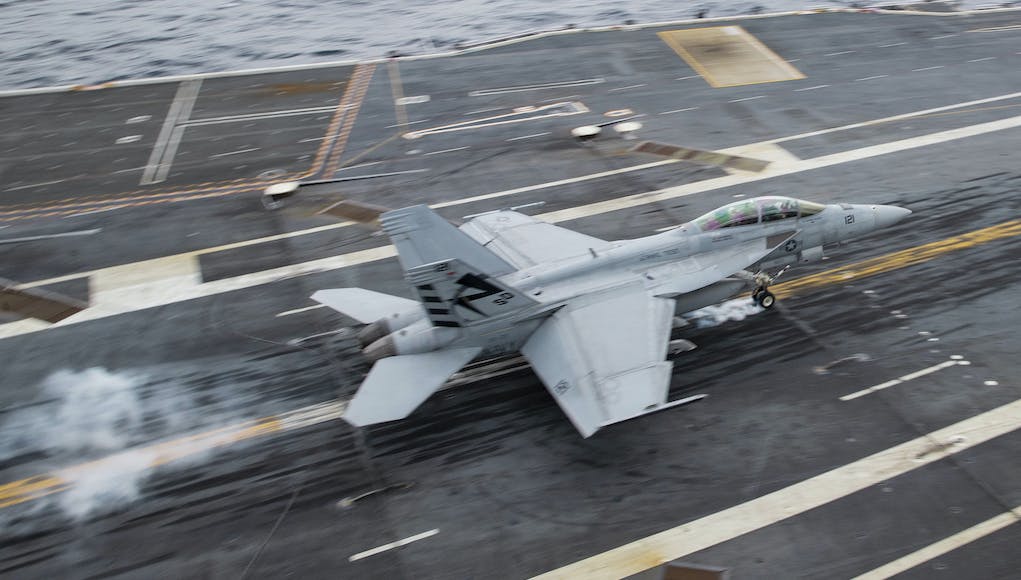 The U.S. Navy say that this significant milestone in the ships’ history began on July 28th, 2017 with Ford’s first fixed wing recovery and launch using its first-in-class AAG and EMALS technologies.

“I couldn’t be more proud of our crew, their motivation is amazing,” said Cummings.

“We’ve been working extremely hard to get here today, and to see this 1,000th trap completely validates their efforts and the technology on this warship.”

“There are a lot of people who are working night and day to make sure that this ship is ready to go be a warship out in the world,” said Gallagher.

“To be a part of that; and this deck certification is super cool. Also getting the 1,000th trap helps the ship get one step closer to being the warship that it needs to be.”

With 1,000 launches and recoveries complete, Ford will continue its flight deck and combat air traffic control certifications in preparation to deliver to the fleet regular flight operations in support of East Coast carrier qualifications say the U.S. Navy.

I wonder where it might end up further down the line! “QinetiQ and the US Navy carried out a study on an electromagnetic catapult launcher. Early studies indicated that a 300ft-long, 90MW linear motor would be needed for the CVF aircraft carriers, but both MOD and UK industry would wish to see the results of demonstrations and trials of electromagnetic launcher technology before considering the selection of a launch system. An electromagnetic aircraft launch system (EMALS) is to be developed by General Atomics in the USA for the USN CVN-21 aircraft carrier. The maturity of EMALS technology for integration into… Read more »

Hi Mate, I do see both of the carries being fitted with a form of catapult system in the next ten years, maybe sooner after the 1SL’s presentation on using PoW as the test bed for carrier operated UAVs. I think the carrier will be fitted with a combination of launching methods. Still keeping the bow ramp, installing waist catapults (probably just one to begin with), installation of a arrester system and painting on an angled deck. In another thread I mentioned the Converteam (GE) version of EMALS called EMCAT. They have been running this system for nearly 20 years… Read more »

Re I’m pretty certain they did model a version specifically for handling the max all up weight of the F35C (31,800 kg) as part of their original bid for the carrier’s catapult system.

This sounds like the perfect solution for the near future thanks!

It’s all coming together for the GRF. All new systems have problems and take time to bed in. Emals are a huge improvement over the steam cats, causing far less wear and rear on airframes. These carriers are the best built to date!

Lol, just learned that theres a flaw in the design of the Gerald R Ford and George H. W. Bush. To save mass rather than using naval plumbing they based their plumbing on aviation designs (suction) but the pipes are too narrow to handle the crew of an aircraft carrier and when several toilets are flushed at the same time their isn’t enough vacuum and so they get blocked up. Everytime they do they have to flush the pipes with acid to clear the blockage and that costs $400,000 a time, they are having to do these acid flushes several… Read more »